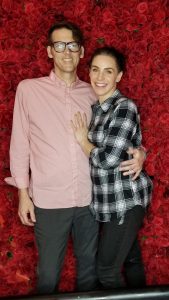 I have big news this week. I got engaged!

To paraphrase Beyonce, I liked it so I put a ring on it.

Last Thursday, on the one-year anniversary of my girlfriend Jamie and I officially becoming a couple, I asked her to marry me and she replied with a resounding yes.

Now the ask wasn’t a total surprise because she and I had talked about getting engaged before and we’d mentioned that it would be nice to do it on our anniversary, but I tried to keep as much of it a secret as I was able.

She had shown me some rings she liked so I secretly ordered one and hid it in my side table and I wondered how I could try to ask her without it being a bore.

Should I ask when she’d least expect it, like at the house when nothing else was going on, or even when we were in the middle of something else?  No, that seemed too much like it was just thrown in during the day. Should I try to do it publicly somehow? That’s easier said than done when my cancer precludes us from going out much.

My time came when she bought tickets to Pose, a place that bills itself as a “selfie museum” in Owensboro, where they have multiple backgrounds set up with lighting so all a person has to do to get professional looking photos is set their phone in the phone holder and snap away.

We got dressed and made our way to the place. I took lots of pictures of her in front of a couple of the backgrounds, one with a swing in front of peach flowers and another with a big, elegant chair. Then we found the rose background, which made really nice photos really easily.

I snapped away, with Jamie striking different poses, all with her in the photos alone. Then I set my phone on video mode, walked in as if I were just joining the photos, dropped to one knee and popped the question.

Of course she said yes, which even though I knew she’d say yes, it was a relief to hear.

Then we snapped a lot more pictures with her showing her ring and with me in there too. 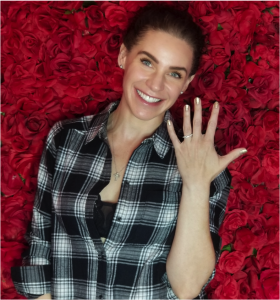 I always forget how skinny I’ve gotten and how frail I look until I see myself in photos. It’s almost depressing, but in these pictures I knew no one would be looking at me anyway so I wasn’t too worried.

We changed our relationship status in the parking lot and posted a few of the pictures, then raced to my parents’ house to tell them before someone else could.

We haven’t set a date for our wedding yet because there are many details to iron out first. She lives in Brownsburg, Ind. and works in Indianapolis and I live in Hawesville, but we’ve split time between the two locations for most of the last year anyway. Insurance questions, along with others related to my cancer, are among other considerations we have to look at.

Surprisingly, the Hancock County community has played an inordinately large role in mine and Jamie’s relationship and the fact that it’s progressed this far.

Originally when she would come visit me she would comment on how far away stores were compared to where she lived, and how difficult it was to get her beloved Starbucks. When we were at her house she’d make a point to say how nice it was to hit her regular car wash, get Starbucks and be home quickly.

Soon though, she began to notice how laid back and friendly Hancock County is. While her news feed was showing her stories of more shootings and crime in Indianapolis, the community here was embracing me in my battle with cancer and supporting her just the same. You guys slowly won her over.

Now she loves Hancock County and wants to be involved in the local community as much as she can be. She loves the people here and loves how friendly everyone is and how safety isn’t really a worry here.

Whereas a couple of years ago she was looking at apartments in downtown Indy, now she’s looking at how to make my house nicer so when we live there together it’ll be a nice place in the country.

I want to thank everyone in the community for welcoming Jamie to the area. I truly believe that if it weren’t for the hospitality of everyone here she would have had no reason to want to be here over Indy and that would have been a major hurdle in our relationship that might have been impossible to overcome.

So for my engagement and my future wedding, thank you everybody!