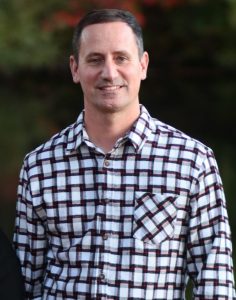 Gabe VanCappellen, Project Lead the Way Teacher at Hancock County Middle School, was born in upstate South Carolina. Johnny Bridges & the late Barbara Bridges, his uncle and aunt, had been living in Hancock County for years and his family decided to move to Hawesville in 1994. He started seventh grade at HCMS and graduated from Hancock County High School in 2000

His plan was to be an electrician and Gabe earned his Electrical Technology & Communications Associate Degree at Owensboro Community and Technical College. He then decided on teaching and earned his Bachelor’s in Middle Grades Education with an emphasis in Math and Social Studies at the Owensboro Western Kentucky University campus and his Master’s in Teacher Leadership through WKU as well.

He worked at Crossroads IGA in Lewisport from his junior year in high school through college. He also worked one summer at Domtar and one summer at Best Chairs in Cannelton.

Gabe is currently finishing his Rank 1 with an emphasis in STEAM (science, technology, engineering, arts and mathematics) Education through Green River Regional Educational Cooperative. “They do a lot with NASA that we’ve been able to incorporate through our school,” he said. “There are 4 other teachers at the middle school going through the program with me. It has been really good. As a group, we can collaborate and bounce ideas off each other.”

“Ms. Sanders (Traci Sanders, Principal at HCMS) and the board of education is really supportive of the program,” Gabe said. “They always invest and get us set up with the up-to-date technology. I teach automation robotics, where the seventh grade students learn to build and program robots. In sixth grade we do a class called Design & Model – the students learn how to measure accurately and draw using computer-aided drafting software. This year we’ve gotten 2 new 3D printers so they can create logos and all sorts of things and we can actually 3D print them. In eighth grade I teach Green Architecture and students learn how to draw floor plans for houses and shipping container homes. I also teach 2 math classes called Problem Solving, where we can try to do more real world math and relate it to hands-on activities and technology.

His students make gadgets such as fidget stars and put them in the PBIS (Positive Behavior Intervention Support) Store at HCMS on Fridays. “It’s new this year. It’s going really well,” he said. Students earn Hornet Bucks for good behavior and for meeting expectations that can be used to purchase items in the store.

Gabe enjoys his job and doesn’t have any plans to be an administrator at this time, he said. He loves what he teaches and wants to continue for as long as possible. “I want to be in the classroom. I think that’s where I belong. I enjoy doing that the most – interacting with the students. It kind of evolves as technology does. It’s really neat to see where it goes. This year I’m doing something new – a Future City Competition. The kids have to make a model of a city and this year they are building a city 100 years into the future using recycled materials.”

They started the project at the beginning of the school year and will be presenting it on Martin Luther King, Jr. Day, January 16, 2023 at Oldham County High School. They have 5 groups of students they’re taking. “That program is basically to show off their creativity and problem-solving skills,” he said. “They’ve done a great job so far. I’ve been really impressed with them.”

His YouTube channel is Gabe VanCappellen and it has a HC Hornets logo as the icon if you’d like to check out some of the fun tutorials he includes on it for demonstrating to his students.

“Hancock County is a great place to grow up,” he said. “It’s a wonderful place to live and work. I enjoy working at the school system. We have a great staff and supportive administration. The parents and community are always really involved. We have wonderful kids – they are always eager to learn and it’s a blessing to work with them. I enjoy going to work every day.”

In his spare time, Gabe said he likes working on vehicles, especially mini-trucks and enjoys detailing them as well. He and a friend go to truck shows all over the country. “We like them with air ride systems on them – trucks that sit really low to the ground. I’ve been into that since I was probably 17-years-old and just got back into it.”

He also loves to travel with his wife and daughter. “We like to go to the zoo and we go to Pigeon Forge nearly ever summer. I used to play a lot of golf and as my daughter gets older I want to get back into that and try to get her interested in it. We like going to Hancock County football and basketball games. My oldest nephew, Hendrix VanCappellen (who attends HCMS), plays football for KFL and we like to go watch them play.” Gabe is a Florida Gators fan and also likes watching their games.

Connie Griffin, Gabe’s mom, guided him well and set a good example for him growing up, he said. “She really showed me the value of hard work, to treat people nice and to always give your best effort no matter what you’re doing.”

Gabe has lived in Lewisport since 2009. He and his wife, Sara, married in 2013 and moved into the new house they built in 2016. She teaches Special Education through the Daviess County School system at RiverValley Behavioral Health Hospital. They are members of Lewisport Baptist Church and Sara is on the Preschool Board there.

They are blessed with one daughter. Kate is in kindergarten at North Hancock Elementary and enjoys gymnastics and playing Tee-ball.