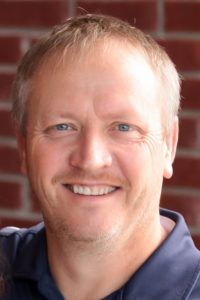 Troy Roberts, Lewisport Fire Department Chief and EMT, graduated from Hancock County High School in 1991. He is the son of the late Linda Mae Morgan Roberts and John Edward Roberts.

Troy often helped his dad out at Southern States farm supply store in Hawesville and said it gave him the opportunity to also get to know many members of the community in Hancock County.

His father’s brother, Sam Roberts, was a long-time employee of the Clarion and a master news writer as well as musician. Troy enjoyed singing along and listening to his dad and uncles play bluegrass, gospel and country music together at family gatherings. They also performed as a family at local events such as the Steamboat Festival. He and family members sang while his Uncle Carl played fiddle, his Uncle Sam played guitar and his father played the stand-up bass.

Troy met his wife, Teresa, when they were teenagers and started attending Union Baptist Church, where her father was Deacon at the time. The couple were married in her parents’ (Ray & Deanna Estes) front yard in 1995.

Troy worked for Kimball International Inc. in Santa Claus, Indiana for 3 years as a machine operator. As a part of the safety response team there, he acquired First Aid training.

He then worked for Alcoa in Hawesville, in 1997 and started in assembly. When he moved into the machine operation position, he had an accident requiring him to go on light-duty. During that time, Alcoa sent him to EMT School at Owensboro Community Technical College (OCTC) in order for him to be on the safety department there.

He earned his EMT License in 1998 and continued working full-time at Alcoa as Safety EMT and security guard until 2003, as well as working part-time with the Hancock County Ambulance Service.

Troy joined the Lewisport City Fire Department in 2000 and took over as Fire Chief in 2016. He is the current President of the Green River Fire Fighters Association (GRFFA).

The GRFFA provides training locally and has instructors that come to the station to teach. There are several schools for additional training courses in the area as well. Troy started as Second Vice President of GRFFA, then moved to First VP, before starting as President in July of this year. They orchestrate the fire school’s training in the Green River area which spans over 8 counties.

In 2004, he began working full-time with the Hancock County Ambulance Service. He mostly works at the Lewisport station and also assists at the Hawesville station when needed.

Troy loves being able to serve his community in his work. “There’s more meaning to it because I did grow up here and know a lot of people here,” he said. “It makes a big difference, I think, when you know people. It gives you a more caring attitude toward it, I believe, to be able to help your own community. I enjoy helping people. Teresa always says I was meant for this job because I can put whatever it is out of mind and do what I need to do (in an emergency situation).”

Troy serves on the Early Childhood Board in Hancock County. He also served one term on the Lewisport City Council.

He is a Deacon at Lewisport Baptist Church and runs the sound, screen and other equipment for the Sunday morning praise and worship. He has stepped in a few times when needed to lead the Sunday morning worship service, and also taught Sunday School for the grades 5-6 class on Wednesday evenings and Sunday mornings.

Troy & Teresa are blessed with 2 adult children: Jeffery & Hannah. Jeffery played saxophone and Hannah was in the Color Guard in the HCHS Marching Band.

Jeffery is an ordained minister. He works at Union Baptist Church and for the Baptist Association. Hannah works at Labor Management in Lewisport and is currently taking EMT classes at OCTC.

Hannah and Jeffery are both volunteers for the Lewisport Fire Department and Teresa and her father, Pastor Ray Estes, both volunteer as Chaplains.

Troy & Teresa are blessed with 3 granddaughters: Magnolia, Karsha and Mercy. They are really enjoying watching their grandchildren grow and learn.

“I love it when the grandchildren come over,” Troy said. “They are so happy and playful. We spoil them, of course. They light our house up.”

In their spare time, they also love to take camping trips in their camper. “Most of our camping trips are local. In 2021, we went to Michigan,” he said, “Teresa & I and Bella, our dog, drove to Lake Michigan. I got to go to the top of a lighthouse. When you’re walking along the outside at the top, they have markers that show how far away cities are, such as Chicago. That was a really cool trip and probably the farthest we’ve been in our camper.”

Their 7-year-old rescue dog, Bella, loves to go with them on those trips, he said.

He enjoys hiking and hammock camping as well. “We’ve made several trips out to Red River Gorge,” he said. “We hammock camp, fish and hike – myself, Jeffery, his wife, Bethany, and her father, Donnie.”

Troy & Teresa, along with family members, have rented a cabin for a week in the Smoky Mountains for the last several years, every summer. They enjoy the cabin, grill out, hike, travel into town and play cards on their vacations there.

Troy said when he retires sometime in the next 10 years, he and Teresa look forward to a trip out West in their camper.

They are also looking forward to Christmas in the Park in Lewisport on the night before the Christmas parade. “The girls really like it – hot chocolate, train rides and apple cider,” he said.

Troy has a priority of putting time with family first. “A lot of the time when my children were growing up, I was doing factory work and working swing-shift. It was a blessing when they shut down our department at Alcoa. I was working 4 on and 4 off, nights and days. I drew unemployment and then started full-time for the County. We’ve made it for the last over 20 years on less money, but being able to spend time with my family has been nice.”