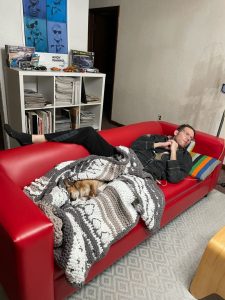 It’s Wednesday morning and I’m alone. I’ve been alone for more than a week now. My fiancée Jamie has been in the hospital in Indianapolis, meaning I’ve been left to take care of myself.

It’s not been great.

Whether she wanted it or not, Jamie had become my de facto 24/7 caregiver, meaning I could largely lie in bed and she would see to it that my feeding machine was always running and that I got my medications when I was supposed to. She also was sort of the maid, the dog feeder and my biggest cheerleader.

But starting sometime about two weeks ago she began to have these random pains, first in her head and then in her ears and throughout her body. We weren’t sure what was going on but we both joked at the time that she couldn’t afford to get sick because then we’d both be in trouble.

It turns out we were both in trouble.

Her pains remained random but grew worse, eventually forcing her to stay in bed all day every day, meaning I, the dying and feeble cancer man, suddenly became the caregiver for both of us. It was a sad state of affairs.

I took over all of my own stuff, refilling my feeding machine as needed and giving myself medications on what I thought was a pretty good schedule. She stayed in bed and I basically left her to rest, all the while secretly proud of myself for keeping up with my meds.

I wasn’t doing a good job taking care of her though, as evidenced by one late-night conversation a couple of days in when she said, through tears, “You haven’t even asked me if I needed anything.”

I did better from then on but she continued to get worse. I took her to a VA clinic in Owensboro, since she’s a veteran, and she told them she thought she might have meningitis. They guessed the flu or maybe an upper respiratory infection and sent her home with steroids and an antibiotic.

Days later we drove to her house to spend Christmas up there, but a day or so after arriving she made a late-night decision that she could no longer stand the pain and she drove herself to the emergency room at the VA hospital in Indy.

Day after day they performed tests trying to determine what exactly was going on. Maybe it was flu; maybe it was HIV. They even floated the idea that it was a rare new illness that had only been discovered within the last three years. Still more tests. Then they decided it was viral meningitis. Then it was bacterial meningitis. Or maybe it was the fungal variety.

Finally, after a week of tests, they made the final determination that it was indeed bacterial meningitis, which in some instances can be fatal.

With a real answer they continued treat her, and she is supposed to be getting released just as I’m writing this at my kitchen table in Hawesville.

I won’t get to see her in person until January 8, when she’s going to make the drive to her Kentucky home to see her nearly independent fiancé and his very dependent Chihuahua.

I’m not sure if I’m any better off for having to take care of myself for these past two weeks or not. If nothing else I got a taste of the relentless daily chore it is taking care of someone like me.

And Jamie says she’s gained a new appreciation for how it is to feel bad all the time and she understands why I groan when she tells me about some chore she thinks I should do.

Maybe this whole sickness thing will have been good for us both after all.