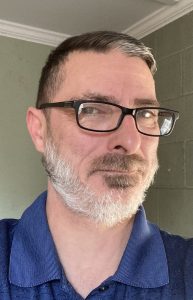 Well, just in time for the holidays, seems a new variant of COVID-19 – Omicron – has been discovered in South Africa. Early word is the variant could be more resistant to vaccines, and that the virus tends to reside in the upper respiratory system, making it much more transmissible through sneezes and coughs.

The president says not to worry, the scientists say it’s too early to tell, the economy screams for us to spend our money, and here I am thankful we at least got through Thanksgiving before it all comes tumbling down again.

Time to dust off the masks and Lysol wipes … again.

Speaking of Thanksgiving, I am certain most of us were happy to be able to get back with our families following the challenges the pandemic placed upon us for the past 19 months, though I am beginning to feel like this has been how I have lived my entire life.

At any rate, we were able to gather with Amber’s family for the holiday, which gave me a chance to visit with my six-year-old niece, Evelyn, who I had not seen in nearly two years.

Evelyn is a smart and funny kid, and I enjoy talking to smart and funny people, no matter their age. Some might say I have a mind more suited to conversations with children, and I reckon that just fine.

Anyway, here’s how one of my conversations with Evelyn went:

“Yes. I have a pet dinosaur; he only likes me.”

“I also have a pet spider.”

“What kind of spider?”

“A Spider-Man spider. He comes out at night, and snuggles with me. He also bites people.”

“Yeah, he bites uncles … Like. You. But he doesn’t take big bites, just little ones like this (she pinches me lightly several times), that way you never know, until it’s too late.”

She laughs, with a sideways look, as I get up to walk away.

I’m still concerned by what she meant by “until it’s too late,” but maybe a bit too scared to hear her answer.

Merriam-Webster dictionary has selected for its word of the year for 2021, “vaccine.” This follows the selection of “pandemic” as the top word in 2020.

The dictionary publisher revealed other words on the top ten list are: insurrection, perseverance, woke, infrastructure, Murraya, cisgender and Meta.

Merriam-Webster bases its rankings each year on the lookup data at its site merriam-webster.com over the previous 12 months. Vaccine spiked to a 600-percent increase in queries in 2021 and up 1,048 percent from 2019.

The word became a popular search term in August when “discussions about policy, approval, and vaccination rates — rather than the vaccine itself — sent people to the dictionary,” according to a statement.

“The biggest science story of our time quickly became the biggest debate in our country, and the word at the center of both stories is vaccine,” Merriam-Webster said.

Certainly, words are important, and it’s always a good idea to choose them carefully and with purpose.

Considering the words of the year for the past two years, it would seem we’re all very interested in what is going on around us, though perhaps not all for the same reasons.

It’s unfortunate that a public health crisis got turned into a political football rather than a matter for science, but as humans, it’s natural to try and find someone to blame, even when that blame – if there is any – might be a bit difficult to find.