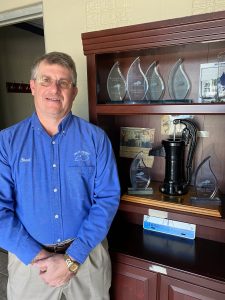 In 1978, Brent Wigginton moved to Hancock County with his family. His parents, Jerry and Kay Wigginton bought a farm in Pellville. Jerry worked at NSA and Kay was a Homemaker. Wigginton grew up farming and said he, “learned early in life, what it was to have to do hard work and see a job through from beginning to end; raising crops and livestock.”

Wigginton graduated from Hancock County High School in 1988. He attended Owensboro Vocational School, while still in high school. He worked at the G.E. Plant in Owensboro for 8 years, as a production machinist, while farming part-time as well.    He took a job with Commonwealth Aluminum (Aleris) until September of 2000 and then in March of 2001, was hired by the City of Lewisport for the Public Works Department; as Gas, Water and Sewer Operator.

Over a period of years, Wigginton has earned all of the required licenses, such as, for Water, Waste Water, Gas Distribution, and Pesticides.

In December of 2006, he took the position as Lewisport City Administrator and has been in that position ever since. His duties include maintaining the natural gas system, water system, street drainage, parades, facilities, landscaping, and grounds keeping. ”Also, presenting a budget to the Council and everything that goes into managing a city. A little bit of everything,” Brent said.

He’s out in the field quite a bit too. “I’m kind of back and forth, all the time.”    He said he feels blessed to have such a good staff and that, “nothing is possible without the team.” They were awarded “Best Tasting Water” seven times, beginning in 2001. And they won again this year.    Both of his daughters were very active in softball. “I worked with softball for over 20 years. The recreational leagues and then through the high school softball boosters–Lady Hornet Boosters for 14 years. I held the position of Treasurer at one time, Vice President and several years as President.”

Wigginton’s first grandchild was born this year. He loves being a grandparent and hopes to get involved with softball again, when the grandchildren start playing.   He was with the Lewisport Volunteer Fire Department for 13 years. He has served on the Kynergy Board of Directors for many years, and since has been re-elected by District 9, which encompasses all of Hancock County.

“I really enjoy the experience of being on the Kynergy Board and representing Hancock County and being in a position to help all of the county, not just Lewisport, but the entire county. I’ve had numerous calls from people all over the county, situations they’ve had and working through it with Kynergy staff. They’re really good about helping out in all of the districts,” Brent said.

He joined the Lions Club last year, and enjoys helping with the Fair, festivals and activities. He encourages people to get involved and help out at events like Christmas in the Park and the Lewisport Heritage Festival.

He says that organizations like the Lions Club are, “vital to the community.” If you’re interested in joining, contact Kasey Emmick, Tim Evans, Larry Hedden, or any of the Christmas in the Park and Heritage Festival committee members. You can also reach out to Lewisport City Hall, about volunteering or directly call Brent @ 270-922-6665.

“We are always looking for volunteers,” he said.     He has been researching WWII for many years. On his bucket list, is to take a WWII guided tour in Europe. His grandfather, Edwin Wigginton served in WWII. And his father served in Vietnam.

Brent’s favorite hobby is woodworking. He builds farmhouse-style furniture and fulfills custom orders from his shop. His father is also a wood worker. “I’ve learned a lot from him, over the years,” he said. He learned welding and mechanics from his father, growing up, as well.     He and his wife also had an antique booth. They did refinishing and selling of antiques.

They put a pool in and have been enjoying as many “pool days” as possible this summer. Now that he and his wife are “empty nesters”, Brent says they plan to do some traveling soon. They both love history and antiques. They’ll be visiting many antique stores, while traveling up the Eastern Seaboard to Massachusetts, Vermont and Maine. Then, they plan to go out West and see the Rockies and Yellowstone. Also on their list, is visiting Niagara Falls and a trip to Hawaii.

Wigginton loves to hunt and fish and hopes to do more when he is retired.    He married his high school sweetheart, Renee Shutt, on March 10th of 1990. She has been an RN at Owensboro Health System for 35 years.

They have two daughters: Raelynn and Haley Ann. Raelynn married Russell Haycraft, she teaches 7th grade English at HCMS, and they have 6-month-old daughter, Collins Rae, Brent and Renee’s first grandchild. Haley Ann is in her first year of college at WKU, studying to be an RN, like her mom. They are members of Lewisport Methodist Church and Brent is on the Trustee Committee.