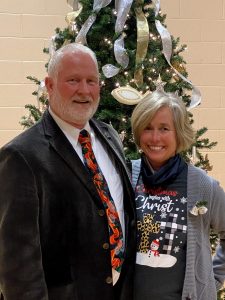 Tom Wilson’s family moved to Hawesville in November of 1967, when he was 4. His father, Richard Wilson, was hired as a project engineer at WesCor. They attended Hawesville Methodist Church. Tom was in band, played football and basketball at Hancock County High School, and graduated in 1981. Tom’s mother is the late Louise Wilson.     He attended University of Kentucky, for 2-3 years, taking Engineering classes. But, he said his “heart was not in it.”

Just before his 25th birthday in 1988, he said, “I began to surrender my heart to Jesus. It was an eight-month process…I fully surrendered my life to Jesus. I met with Eugene Hayden (a leader at Hilldale Methodist) one evening. We prayed together in his basement. Gene laid hands on me as he prayed and from that point onward, I have never been the same. I was delivered of things that held me in bondage and freed from addictive behaviors. Gene became my mentor for many years. I truly do not know where I would be if it was not for Eugene Hayden.”

In 1991, his son, Justin, was referred to Teresa, the Speech & Language Pathologist at Hawesville Elementary, at the time. He had consultations with her over the course of a year, to discuss Justin’s progress. He asked her out on a date a couple of times until she finally said yes. They married in October of 1992, and have been married 29 years. “Every day when I look at Teresa, I am reminded of the Goodness of God,” Tom said.

Tom worked at several entry level jobs: construction, a bearing company, and in July of 1986, was hired at NSA. There was a big lay-off in 1990 and he went to work at Crescent Paper Tube, where he stayed for almost ten years.     He began serving a church as a lay speaker in 1994; Bethlehem in Eastern Daviess County, on Hwy 1389. While serving there, he began the candidacy program to pursue ordination in 1997 and in Fall of ’98, fully committed to going into ministry.

Wilson left Crescent Paper Tube in January of 1999, for the Spring semester at Kentucky Wesleyan College, to complete his bachelor’s degree and, in the process, pursue ordained ministry. He graduated with a double major in History and Religion, and a minor in Philosophy. “I feel KWC more than prepared me for graduate school. I did quite well,” he said.

He attended Asbury Theological Seminary for graduate school.    “The Lord paid for all my schooling. I received other scholarships, grants, service loans, and scholarship from Hilldale,” Tom said. “Amazingly, while I was in college and seminary, so were both our children. We never touched our savings to get us all through school! God is Good!”

Tom started at ATS in the summer of 2001. After being pastor at Bethlehem for seven years, the bishop appointed them to Sonora, where he served as their pastor for four years through his seminary time. “Sonora was a wonderful place for us. It would be our shortest tenure.”    While in school, he made several study trips. The first was to Israel. He took a course at the Rothberg Institute of the Hebrew University of Jerusalem: The History of the City of Jerusalem, a geographical survey. “We studied every era of Jerusalem, beginning before Abraham to the present. With each period, we visited archeological sites. It was amazing.”

In 2005, they were sent to Cloverport, where they served until 2012. “We felt the Lord smiled upon us for allowing us to be in Cloverport,” he said.     Tom was ordained as an Elder in the Kentucky Conference of the United Methodist Church in 2008.

In 2012, they were sent to Burkesville in Cumberland County, where he served two churches for the first time. Near the end of their time there, Teresa retired from working for school systems, after over 30 years. “Following me in ministry, after working in Hancock County, Teresa has worked in Hardin, Grayson, and Adair Counties,” Tom said.

In June of 2019, the Bishop sent them to Leitchfield in Grayson County. “This is where we are today. We could not be happier. Along the way, the Lord has given us the best appointments in our Conference. We are nestled between two lakes – Rough River and Nolin.”    Their first mission trip was to Russia in 1993, where Tom says he caught the “mission bug.” The second and third, to Ghana and Zimbabwe in 1995 and 1997.    “I began leading missions thereafter.

In 1999 and 2001, I went to Ghana and Kenya. Hilldale Church sponsored a minister in Kenya and I wanted to see what he was doing and work with him. In 1999, I traveled by myself. In 2001, my son, Justin made the trip.    “In 1999, my hosts in Ghana took us over into the Ivory Coast, where we met with Methodists there for fellowship. I gave a short devotion in English, which was translated into the local language of that part of Ghana, then into the local language of Ivory Coast, and finally into French.”    They have made eleven trips to Ghana and helped start over thirty new churches in rural, remote villages.

“Beginning in 2013, we officially transitioned to Zimbabwe. We have gone every year but one, since, and have helped start over twenty churches there,” Tom said.     Reach The World for Christ Ministry, INC, is the name of Tom and Teresa’s Mission. Tom has had nearly fifty people travel with him on missions. “It is an amazing thing to watch the experience and the Lord work in peoples’ lives, while on mission. No one comes home from a mission and remains the same. Most become more active in their church and in their support for their church and missions”

“Everyone comes to appreciate the United States and the benefits of being an American. I have been given much honor and respect as I have traveled, solely, because I carry a US passport. I have found Americans are loved by every place I have been. I am quite skeptical concerning our media’s portrayal.”

In their African missions, Tom said they have seen, “over two thousand persons come to Christ on two missions, over a thousand on several missions, and an average of four hundred on all the others.”    They have helped educate two students in the US. One has gotten his PhD at ATS.  The other, they provided funds to build several churches. They have recently completed their first rural medical clinic that will be owned and operated by the Methodists in Zimbabwe, they provide salary support for two rural pastors, and currently support over seventy students in rural Zimbabwe with their school fees.

“Our primary reason for starting this ministry is this: if a father cannot provide his daughter’s school fees, he will sell her in marriage. In the rural villages, father’s have sold their children as young as 13-years-old. It broke our hearts. It costs an average of $175.00 to pay a child’s school fees, provide a uniform, books, paper and pencils, for a year. Dozens of families have come to Christ through this school fee ministry.”

Family and friends have also supported their missions.    Tom loves to hunt, in his spare time. His hunting trips have been to places such as: New Mexico for Elk, Wyoming for Pronghorn & Mule Deer, Washington state for Mule Deer and Roosevelt Elk, Utah for Mountain Lion, and Newfoundland for Moose. Tom’s father and brother, Mark, have gone on some trips with him.    His travel totals are: 35 trips abroad, 23 nations, 45 states, 26 missions to 7 nations, 6 study trips to 7 nations, 3 hunting and fishing trips to Canada.

“The Lord has blessed me,” he said.    Tom’s father has a “hobby farm,” outside Hawesville. He goes once a week to help on the farm and visit his father and step-mother, Marjorie. When he retires, he plans to continue mission work and do more hunting. He has a goal of shooting a Red Stag in either Argentina or New Zealand. And he plans to, “play on the farm more,” he said.

Janece (Parsons), Tom’s step-daughter, is a nurse and lives in La Grange. Justin, Tom’s son, is a Project Manager for Custom Data Processing in Frankfort. Janece and Justin are both HCHS graduates. Tom and Teresa are blessed with 2 grandchildren; Janece’s two children are: Emma and Ethan.