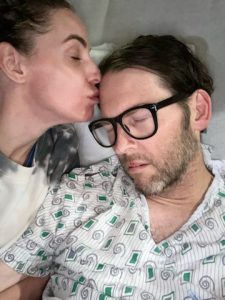 As I was pushed outside last Saturday in a wheelchair, the bright, hot sun hit my face and I couldn’t help but get a little emotional. I wasn’t supposed to see another bright sunny day and I hadn’t really thought about it until then.

You see, the Saturday before that my doctors were certain I was dying, to the point that they allowed my pastor to come pray over me and they flat out told my girlfriend Jamie that my body had reached its limits. Days later another doctor told me I was a miracle because he thought there was no way I was going to survive.

I’d gone to the hospital partly out of precaution but wound up with pneumonia, sepsis and stage 5 kidney failure, any one of which could’ve killed me on its own. My girlfriend Jamie made some calls to my friends and family so they could say goodbye, even though I was unable to speak, so apparently it was a pretty dramatic time. I went through a lot, but I’m grateful that I was mostly unaware, even comically so.

One day someone said something about finally getting my catheter removed but I said I didn’t have one. A catheter?!  I said, clarifying what was clearly wrong. But nope, a quick check showed that I did in fact have a catheter. I’d had it for five days and had no idea. Even worse, I had a rectal tube that same amount of time and had no idea. It’s little mercies like not being aware of a catheter or rectal tube that make life a little more bearable, although I was wide awake for the horrifying removal of both and I’m still hoping to forget that.

While I was pretty much unaware of what was happening, Jamie was there and alert for every tense moment, and she doesn’t have the mercy of not remembering how I was breathing like a fish out of water or how she was telling me her goodbyes and how she’d take care of my two dogs and my family.

She’s told me the stories about those moments with the blank stare of someone who’s been through something big and lived to tell it. She says she had peace about where I’d be going if I did in fact die, but she had to experience that whole possibility live and in person.

We talked later about how if I’d died she would’ve essentially been left to come to my house, pick up my dogs and go back to her life in Indiana as if none of the past 11 months had happened.
It’s not fair that she would be my main caregiver for so long and be so devoted to my care only to have everything stop the moment my life ends.

Thankfully my life didn’t end last week, but it put a big reminder in my face that life is indeed as fragile as people say it is and it can be over at any moment and we should be prepared. I’m prepared for my eternal destiny, but next I need to prepare for what I leave behind. I’ve been selfish and that needs to change, but for now I’ll accept living as a miracle.