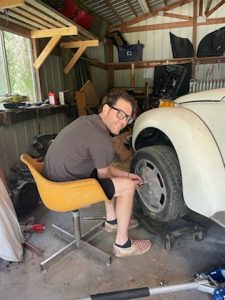 Tuesday I was tired, like, can’t sit up straight tired. I was on the sofa leaning over, struggling to seem like I was even alert. Truth be told, I stay that tired most of the time, but this time it turned into a lesson that I thought I’d learned years ago and apparently hadn’t: a little bit more effort can make a big difference.

After spending the entire night and most of the morning hooked to my feeding tube, my girlfriend Jamie convinced me to go through some more boxes of stuff to sort out what’s worth keeping or donating. I did that for a couple of hours and it did plenty to wear me out. When Jamie brought in the mail and read me the letters we’d gotten that day I lay on the floor, not even wanting to sit upright on the sofa as I listened.

Then after I climbed back up on the sofa, listing terribly to the right, Jamie pitched what I thought was a horrible idea: we should go to Wal-Mart.

I was struggling to sit and she wanted me to take a trip to Wal-Mart? No chance, I said, although I admitted I didn’t want to just go to bed either.

We decided to try it. I’d ride along to Owensboro and ride a motorized cart at the store and she was determined I could do it. I was less convinced. I expected a disaster of me falling asleep in the car on the way or just being exceptionally whiny the entire time.

We set out and you know what? It was fine. My bony, weak legs carried me to and from the store without any real trouble and there was a power cart waiting, fully charged when I arrived. I actually wasn’t even that fatigued while we were in the store.

I was honestly a little bit shocked. Had I stayed home I would’ve been in bed, certain with plenty of evidence that there was no way I could be doing anything other than lying down for a while.

Just a little bit more effort went a long, long way. It was nice to be out and about again. I had several days last week I never set foot outside, so being out in public is a welcome change.

I thought I’d learned the lesson of how a little effort can go a long way back in photojournalism school at WKU.  There was a guy in my class who seemed in most every way my equal, but clearly no better or worse than me in terms of talent or production, but he was a very driven person when I was distracted by cars and other side projects. Not long after we graduated he was a photo editor at Time magazine and I was working at small papers in Illinois. He put out just a little more effort, every day, and it took him far.

I don’t know if I’ll really learn my lesson this time either. It’s easy to be tired, easy to stop short, easy to just leave things for later. But the payoff of doing just a little bit more is worth the effort.