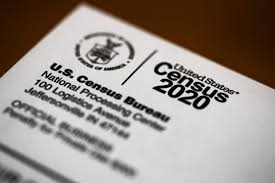 “These numbers are really good numbers,” Hancock County Judge/Executive Johnny “Chic” Roberts said. “I think we can build on those numbers.”

All of the counties bordering Hancock County in Kentucky recorded an increase in population, Breckinridge County added 373 people since the last census, and Ohio County recorded the lowest growth at just 70 people. A different story exists across the river as Perry and Spencer counties in Indiana lost population. Spencer County lost 675 people according to the census, and Perry County lost 169.

The median income level is the strongest building block for Hancock County. According to the census, the median household income in Hancock County is $57,217 per year, the highest income of any county bordering the county in Kentucky. When looking across the river, Spencer County’s median income is just slightly more at $57,305 per year.

“I think we have a lot to offer here,” Roberts said. “We have to get this broadband fixed; I think it is headed in the right direction.”

Roberts said the housing situation in the county also needs addressing. Though the county possesses solid income levels, hardly any new housing exists. Some new homes are being constructed in Hancock Park, but the county needs more.

“We have some potential for growth here,” Roberts said. “I am optimistic about broadband county-wide.”