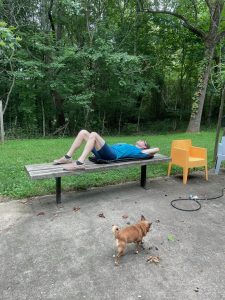 After a long string of seemingly only good news, I finally got some bad news this week. My white blood count was too low to do chemotherapy chemotherapy so I was sent home from the hospital to try again next week.

When I first heard the news I sighed and thought, “there’s no easy or quick way through this,” and for a minute I felt the full weight of a protracted battle with cancer.

While Jamie and I pondered what the news meant for my sickness and even more for our schedules, she reminded me that we trust God to work things out for his good and this was no different.

Everyone needs a Jamie.­­ 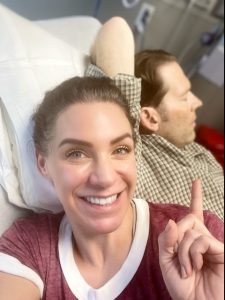 She’s been nothing short of a superstar for me since I was diagnosed in late April. She dropped everything and has stayed with me – or me with her – all but a handful of days since then, and this despite the fact that she lives near Indianapolis and shares custody of her 15-year-old son Jackson.

Everything about her role in my life seems to have been guided and chosen because it’s such a disparate and random set of circumstances, all of which had to be true for her to be able to care for me.

First, she’s been working remotely since March 2020, so she can work from my house. Her ex-husband has been very understanding on schedules with their son. She even has experience with cancer, having lost her younger brother to it in May 2016, where she was his main caregiver outside the hospital. She deals with paperwork all day for her job and loves doing it for me, which is a huge blessing because I find it to be an awful chore.

She’s organized, almost to an annoying degree, but that perfectly offsets my probably not annoying lack of organizational skills.

She has sacrificed SO much.

For her 40th birthday she had a pampering trip to Mexico planned where she’d sit in a jacuzzi every day and get massages when she wasn’t eating the delicious foods that were being served to her. Well, cancer came and she canceled. She got us great tickets to see her favorite up-and-coming comedian before it was too difficult to get tickets. I was too tired to make the ride to the show so she sold the tickets.

Quite often I find myself being awoken in the middle of the night by her very carefully replugging my feeding tube to my body after having unplugged it to quietly and gingerly giving me water to maintain hydration and giving me meds that slow down the nausea.

She’s awake in the middle of the night opening bottles, measuring medicines, giving me water, rotating my nausea medicines and keeping track all in a notebook. All without complaining. And for most of that, much of the time, I’ve slept through it.

Jamie has plenty of presumably valid reasons to tell me I need to take care of myself more often, but she doesn’t hold it against me and even claims that she repeats how much she loves me while pushing the plunger on the syringe each time.

Because of Jamie I know I’ll never be left without the ability to feed or medicate myself.  The odds are she’ll be there right beside me no matter what’s going on, making sure I fight for myself but that I don’t forget that the rest of life is still fun.

I need to get better not only for myself but for people like Jamie, whom I love so dearly and who shouldn’t be stuck with the story of taking care of a guy during his slow decline and disappearance, but instead should be telling stories of later Mexico trips and bigger comedy shows.