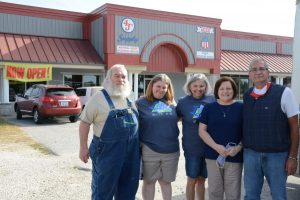 Monty Quinn, the venerable owner of Ace’s Sporting Goods, is riding off into the sunset in retirement, but the legacy of Ace’s will live on with a new owner and a new location, as well as some new offerings.

Quinn, who started Ace’s Guns out of his house in 1979, is handing over the business to Robbie McCormick, who has moved the business to a renovated location at 8155 US Highway 60 in Lewisport. The new location is a far cry from its humble beginnings.

After getting his firearms license he sold guns out of his house on state Route 271 N, later renamed state Route 3543, where he lived with his wife Noel. Business took off, so he made an early decision to expand without getting the proper permissions, as it were, from his wife.

“I took a big room we were building on and made it Ace’s Guns to start with, and I did that while she was in Georgia visiting some people,” Quinn said.

After what he called some “heated discussions” the business continued on, with the family living upstairs. In 1984 they added on about 800 square feet.

“That was the first really true Ace’s Guns,” he said.

In 1994 they built another addition and added 1,800 square feet, and he closed off the old section to use for storage. When he was laid off from his job at the paper mill in 2002, he tore that wall back out and brought it back to around 2,500 square feet, the size it remained through the end.

Over the years he also expanded in products, moving into work boots for the local industries.

“One thing a person does, now they might buy something and not use it very much, but if they buy work boots and they go into work, they use them about every day,” he said. “So they need to be replaced more often.”

They later added a mobile boot trailer where they could park at local factories and workers could buy boots on their way into or off from work. Mail order sales came later.

“We’ve actually shipped boots as far Mexico and even sold some that went as far as Iceland,” he said. “But we’ve managed to meet a lot of people in that little store down over the years.”

Retirement snuck up on him, he said, and he had always planned to retire before Noel.

“I always said I wasn’t going to let her retire before I did, but I lost that race,” he said.

Now he’s helping Ace’s transition in ownership, in location, and in market, staying on for a little while to help McCormick as needed.

McCormick, who has worked in industrial sales for Petter for more than a decade, has set up shop in the newly renovated east end of the Lewisport shopping center, in a space prepared just for him by the building’s new owner, Gary Nugent, Jr. Quinn is walking him through becoming the new Ace’s.

“I would say in the two and a half weeks we’ve been there and Monty’s been in there… we’ve probably moved racks around a half a dozen times…” McCormick said.

“And you’ll do it some more,” said Quinn.

“It’s going to be operated as close to the same way as Monty did,” McCormick said. “Filling his shoes, it’d just take a very special person to be able to fill his shoes.”

Quinn said his shoes were also partly filled by his wife, Noel, who he said was always an important part of Ace’s success.

“In all that there’s been a Mr. Ace but there’s been a Mrs. Ace too,” he said. “Noel has done a lot of bookkeeping there, she’s helped me keep things going. There are times when I couldn’t represent us somewhere else, she has. When you have a family owned business, I’m going to tell you that spouse is very important to work together.”

McCormick said he already has his own Noel in his wife Lisa, who’s also handling the paperwork for the new business.

“If it wasn’t for her I can assure you that I’d be setting myself up for failure pretty quick,” McCormick said.

Customer service is of utmost importance, both men said, and McCormick he learned it from his father Curtis McCormick, who founded Kraftcor, and who’d make himself available even when someone called late at night needing money after a night shift.

“Well Dad would sit down and write them a check and those people would stop by when they’d get off at 10:30, it’d be a quarter to 11,” he said. “…I give that credit to Curtis McCormick, for teaching me over the years the service, and then Monty has reiterated it.”

Ace’s new location technically has a new name. Actually it has two.

Ace’s Boots and Sporting Goods is joined by 4J’s Supply, which is named after McCormick’s four sons, all of whom have first names that start with the letter J. His oldest son Justin is running the retail portion.

Both businesses are under the same roof, but McCormick is using the fresh start to add some things that Quinn never had, like a small hardware and plumbing section.

“It’s all American made, which I think is important in today’s time,” he said.