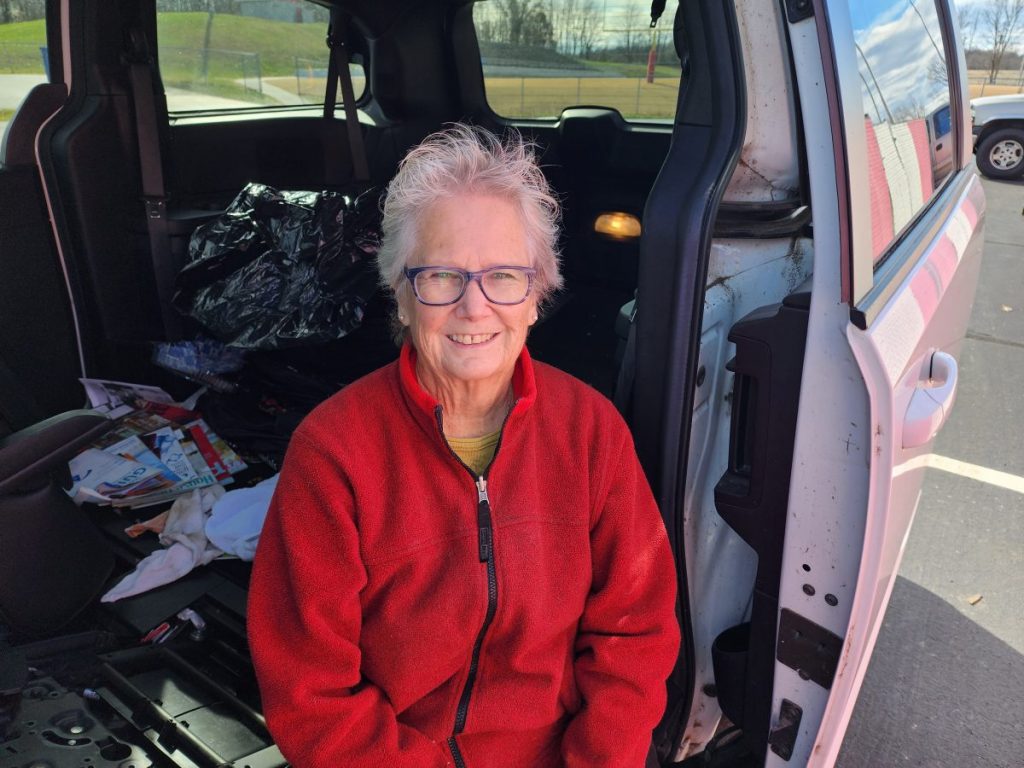 Veronica Taylor was born and raised in Lewisport. “I consider myself fortunate to have grown up on Muddy Gut Road,” she said. “Without electronics and having to figure out how to entertain myself because that’s been real helpful through life. I had a lot of fun. My mom and dad were fun people. I played softball, was in girl scouts – all the things a kid could do. I have had a blessed life.”

She attended Immaculate Conception Catholic School until her junior year and graduated Hancock County High School in 1971. Her parents are the late Joe & Catherine Taylor and her 4 older brothers are Joe, Anthony, Mike and Ledrew Taylor.

Veronica is on the Hancock County Schools Foundation Board, a nonprofit organization established in 2013 to support opportunities for school children. They give 2-year scholarships to 2 students a year and are trying to expand it to include tuition support for students who want to get college credit while in high school and need help paying the fees. In addition, they help purchase tools for students, such as a 3D printer for STEAM learning at HCMS.

She helped establish Hancock County Community Kitties about a year and a half ago. They have spayed and neutered about 150 cats in the county so far, she said.
Since moving back in 2020, she has been a Friend of the Library. “I depended on the library a lot for entertainment (growing up),” she said. “I credit the library with my interest in science and wanting to grow up to be a scientist. Hancock County has a fabulous library system and they provide outstanding services for the people. It is just wonderful. It changed my life.

When I was in fifth grade, I would go to the book mobile and they had this line of books – biographies of famous people like Louis Pasteur, Marie Curie and Virginia Dare. I devoured those. I thought, ‘I want to do that. I want to see that. I wonder how they did that?'”

The most influential book of all in her life, she said, was The Little Engine That Could. “When people say you can’t do something, you just have to say, ‘I think I can.’ And give it your best effort. I’ve done lots of things I wasn’t supposed to be able to do. So that’s my advice, just have that kind of attitude and think that you can do it.”

She said she is very passionate about education in all forms and giving students the opportunity to do different things. “And that’s what I got to do,” Veronica said. “I fulfilled my dream to become a scientist and I had the opportunity to attend multiple schools and learn in each one of them. I went to six schools and I have 4 different degrees but the important part is that I got to be a scientist and I got to do interesting work.

I have been a microbiologist, a plant breeder and my last job was statistician. Throughout my career I worked for the agriculture industry. I did different things, worked in laboratories, on field studies and projects. My last job was Director for Scientific Support at the Center for Veterinary Medicine in the FDA, approving safe and effective animal drugs.”

I like to experience different things and the diversity of living in different places and meeting different people. Especially with the FDA – my division, some people said it was like the UN. I had people from all over the world that worked there.”

Her love of travel has taken her to many beautiful places. “My last big trip was to India in 2018,” she said. “I’ve been to the British Isles multiple times, South America a couple of times and I’m hoping to go to Antarctica in the next 2 years. I want to visit every continent and every state.”

She plans on traveling to Africa and Oceania. “The thought of taking a caravan across the desert and sleeping out near an oasis sounds really interesting to me,” she said. “I’d like to take a train across Australia or maybe rent a car and drive.” She also wants to hike in New Zealand and see where the Lord of the Rings was filmed.

Veronica went on a hiking tour of Ireland by herself and decided to go back and bring a couple of friends. “The 3 of us saw the Blarney Stone, went to a horse race, went to Temple Bar, Giant’s Causeway, Cliffs of Moher and The Aran Islands. It is just a beautiful place to go and the people are friendly.” She’s been 6 times and has also traveled to Scotland.

She and friends took a road trip from Seattle down to San Diego on the Pacific Coast Highway. “It was a laugh a minute. We had the best time, starting off with the Space Needle and Acadia National Park, then Napa Valley, San Francisco and L.A. We saw everything we wanted to see, the Sequoia National Park, Big Sur and hiked back to the coast to see hundreds of sea lions on the beach.”

Veronica said she didn’t start traveling until she was 40 and wishes she’d started sooner. “There is so much to see in the U.S. I’ve been to 46 states and I want to hit the rest of them before I go. The national parks we have are amazing. We are blessed with beauty all around us. Mammoth Cave is a great place to go. You don’t have to go far. Rough River is fun. You’ve just got to be looking for fun and you’ll find it.”

The way she described her trip to India will take you right there. “We were in the bus going from the airport to the hotel in Dehli. I looked out the window and I was staring eye-to-eye with an elephant,” she said. “My friend Eknath planned everything. It was amazing to see the Taj Mahal. We were there for the Holi Festival, which is the Hindu festival of color. We went to the public place, all dressed in white, and you could get packets of powdered colors and go around throwing it on people. It was just the most fun.”

“Two other fascinating places I’ve been to are Machu Picchu, and my nephew and I went rafting down the Colorado River through the Grand Canyon. It was a huge 3-ton pontoon boat. It was an amazing experience. We hit some good rapids. It was a lot of fun. We slept every night under stars. No tents. He had to give up his electronics for a week.”

She decided to move back to Lewisport after retirement because she has family and friends here. “I had good memories here and I felt like I wanted to be at a place where I could give back something to a community that helped raise me. It’s a place that has lots of opportunities, it’s a good place to live and work and has a good sense of community.”

One of the things she said she tries to do is maintain the sense of wonder and bravery of when she was a child. “I always think about how courageous children are. When we’re 3 and 4-years-old, we’re not afraid of being embarrassed. We want to experience things. I think it’s important to have that attitude at every age.

Since I moved back here, I’ve learned to play bridge, mahjong and I’m teaching myself Italian. There’s always something to do and learn. Am I good at bridge? Heck no! I came in last on Wednesday but I’m going to go back and play again. I think the wonder of life and that spark of – ‘I’m willing to try’ is really important. Like they say, you want to start every day like a little girl in a Wonder Woman outfit. I think that it’s important in life to always be open to opportunities, especially if they’re not what you were expecting.”