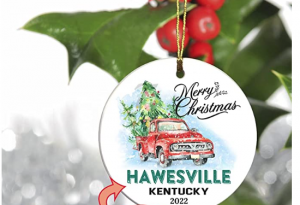 Hancock County Chamber of Commerce Executive Director Tina Snyder Alberta Morris, Sandra Conder, HC Road Dept., HC Farm Supply, HC Volunteer Fire Dept. Jr. Firefighters, Brandon Jarboe with the City of Hawesville, and the HC Chamber of Commerce said there have been several community members along with the Chamber of Commerce who donated funds toward purchasing Christmas decorations for the City this year. “Some items that were left over from previous years that the County did not use as well,” said Tina. She and others started on the project on November 29th and were hoping to finish in time for the Hawesville Christmas Parade on December 3rd.

Those who volunteered and donated toward the goal of making Hawesville bright & merry for Christmas are: Alberta Morris, Sandra Conder, the Hancock County Road Department, HC Farm Supply, HC Volunteer Fire Dept. Jr. Firefighters, Brandon Jarboe with the City of Hawesville, and the HC Chamber of Commerce.

“We have a few more to put up downtown, said Snyder. We’re working on it. It will be what it will be. It will be a nice addition and then next year maybe a group will do something different. Judge Roberts was out there (in front of the Administration Building) helping us get things anchored to the ground. The County is involved as as well as two of the Parks Crew guys, who were key components to our success. It’ll be a little brighter than it has been. When we all do a little, it makes a big difference!”

Snyder said that a local individual purchased a large 12-foot tree for display in front of the Administration Building this year, but that if it doesn’t arrive in time they’ll be putting the big light-tree up again.

There are several businesses that have decorated their storefronts in Hawesville as well this year, including The Rosenblatt building – Karen & Steve Robertson, Butter & Kei’s Sonshine Cafe, Allen & Allen Dentistry, A & B Florist, and EJ’s Pawn Shop.