The Hornets and Lady Hornets varsity teams begin their seasons next week when they go on the road to Owensboro and Whitesville.

The Hornets are projected as a top 4 team in the 3rd Region this year as Hancock County returns four starters from last season. Head coach Mike Orr has eight seniors, two juniors and four sophomores on the roster.

“We’ve got loads of experience with guys who’ve been through some wars and have faced adversity, and that’s not something you can coach… either you’ve done it or you haven’t,” Hornets coach Orr said.

“We’ve been focusing on the defensive end. We got away from that some last year because we had several guys who could score, but this year I’ve gone back to what I’ve done my whole career which is to focus on defense and the kids have really bought in to that. They’re working extremely hard with great attitudes. We’ve had one of the best preseasons since I’ve gotten back into coaching.”

Senior Kaleb Keown is back after leading the Hornets in scoring and rebounding during the 2021-22 season. Keown averaged 15.3 points per game while fellow seniors Devyn Powers and Ryan Ogle were close behind at 14.7 and 14.3 respectively. Senior Evan Ferry led the squad in assists while putting in nearly 10 ppg. Luke Brown, Cole Dixon, Max Gray and Jack Duncan round out the senior class.

Juniors Jordan Payne and Camden Lucas are capable players who will look to secure playing time, along with sophomore Dylan Morris. Dec Lewko, Alex Madden and Jaxson Morris round out the varsity roster.

“I think we’ve improved collectively as a team and I think we’re going to put a product on the floor that Hornet fans will be proud of,” Orr said. “We have big goals this year. We went back-to-back to the regional tournament and we made a dent last year. We want to take that a step further and we have the talent to do it.”

The opener at OHS will certainly be a strong early test for the Hornets as the Red Devils are one of the favorites to take the region title nearly ever year. Ohio County and Owensboro Catholic, along with Hancock County, are at the top of early season projections for the 2022-23 season.

“I like the idea of playing a team that will really put the pressure on and I’m excited to see where we’re at. The Red Devils will do that,” the coach said.

The Hornets finished last year with a respectable record of 15-17.

The Lady Hornets are ready to roll and will be led again by coach Kevin Husk.

Seniors Bailey Poole and Emma Morris are back, as are key juniors Ella House and Lily Roberts.

“I love the preseason we’ve had. The effort we’ve given and attention to detail has been great. Our girls have come in and they’re locked in and ready to kind of prove something this season and build on what we’ve worked on the past couple of years,” Husk said.

Poole led the team in scoring last year with an average of 14.6 ppg. Roberts scored 12.2 and House 10.5. Morris chipped in 5.3 ppg and was second on the team in 3-point field goals made behind Poole. House led in rebounds with 7.2 per game. Roberts and Morris each pulled down over 100 rebounds last year.

Juniors Alexis Gay and Kendra Keown have both been starters, while Layni Roberts and Allyson McCormick will prove valuable assets as they will all play important roles for the varsity. The sophomores are Jadan Roberts and Taylor Johnson. There are four freshman on the roster in Izzy Ross, Aubrey Meserve, Andrea Gibbs and Evony Beckman. Eighth graders Ansley House and Carolina Jones will join the team as their middle school season winds down.

The Whitesville Trinity Lady Raiders are coming off a strong 13-12 season. Trinity defeated Hancock County 50-46 during a battle to the horn last year. You can be sure that the Lady Hornets have plans to avenge that loss when the two teams meet in the season opener on Tuesday, Nov. 29.

“Whitesville is always a tough match up. They always give a great effort and they’re well coached. They lost a couple of key pieces from last year, but I’m sure they’ll be ready to give it all they’ve got.

“We spent last season learning who we are and who we could be. We’re going to put a lot of pressure on the ball… full length… all the time against 99 percent of the teams and I’m excited about it. The girls are working super hard with that and I think they’re going to be fun to watch and support,” Husk said. 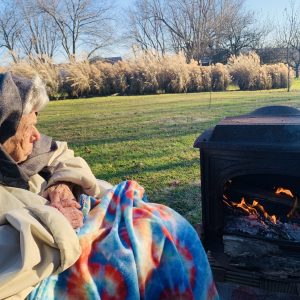