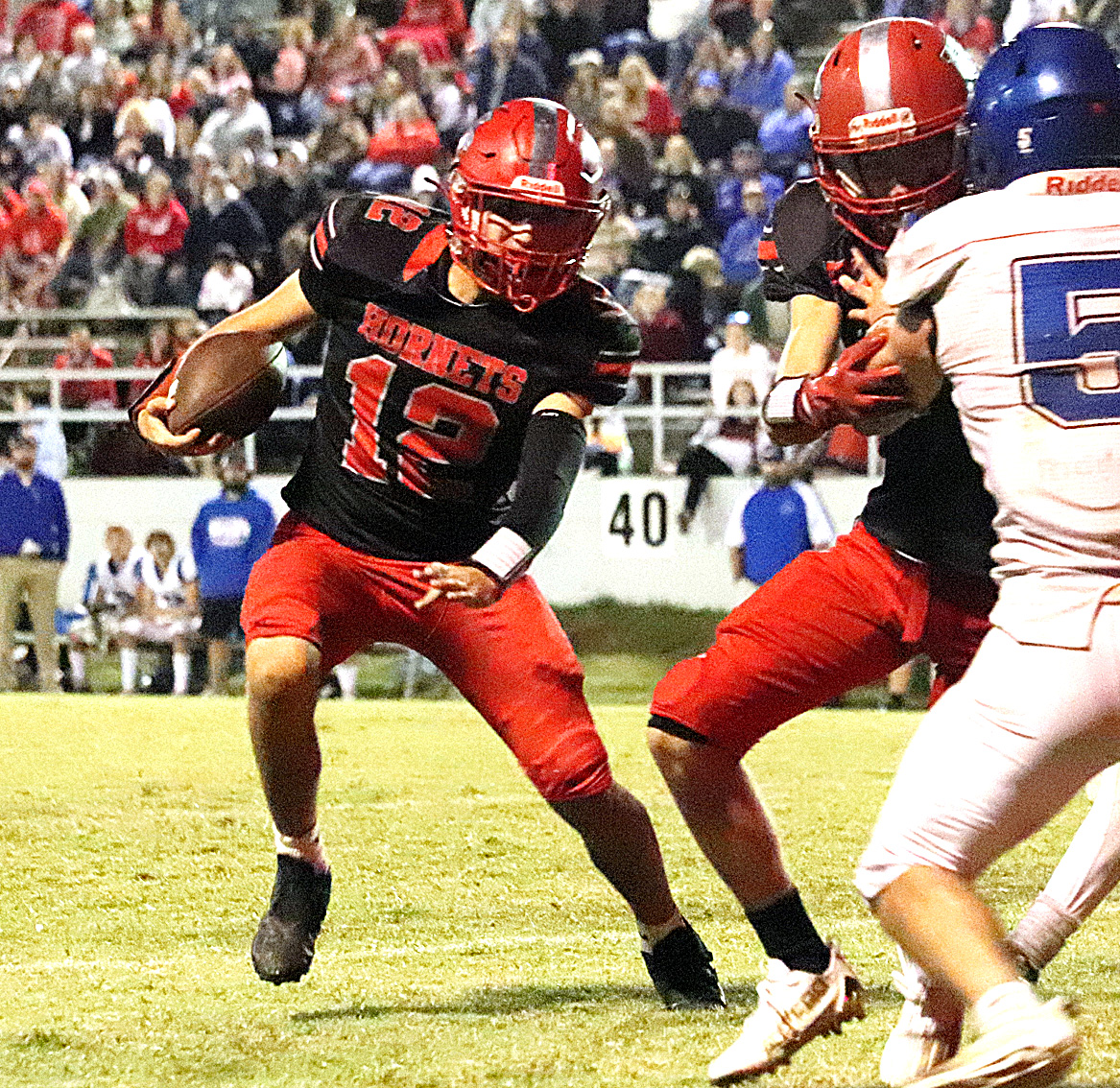 The Hornets bounced back after their first loss with a 28-0 victory over previously unbeaten Butler County here Friday. The district win makes Hancock County 6-1 overall and 1-1 in Class 2A, District 1.

“This was a battle of two top 10 ranked teams with Butler ranked #6 at the time and us ranked #8. For us to step up and shut them out… it was an impressive win for us,” Hornets coach Bobby Eubanks said.

The Bears looked good early on with a stop on defense and two first downs on offense. That progress quickly ended when Alex Basham led a gang of Hornet defenders who shut down the drive and forced Butler County to punt the ball away.

Hancock County mounted a drive that began on their own eight yard line. The Hornet offense worked the ball all the way to the Bears’ one yard line before a fumble cost them a chance for the game’s first score.

Jack Duncan, Drew Lyday and Aiden Weatherholt combined on a defensive stop on third down and the Hornet offense took possession at the Bears 30 yard line after a punt from the end zone.

The offense was poised to score this time and they did not disappoint.

A Cole Dixon to Kaleb Keown completion gave the Hornets a first down at the 13 yard line. Moments later Duncan ran hard for an 8-yard TD and Lyday scored on a conversion run to give Hancock an 8-0 lead early in the second.

The Hornets got the ball right back after a three–and–out by the Bears. Braydon Wathen sacked the quarterback on third down to force the punt.

Butler County got the ball back later and began what would be their best drive of the game. The Bears worked the ball down field to inside the Hornets’ 10 yard line when a Lawson Ward hit the running back and forced a fumble. Jack Roberts recovered and the Hornets ran out the clock in the first half.

Butler County received to begin the second half and the Hornet defense was fired up. A quick fumble by the Bears was recovered by Lyday and Hancock County was in business.

Another Dixon to Keown pass play followed by an explosive run by Logan Willis gave the Hornets a first–and–goal at the nine yard line. A few plays later it was Dixon to Evan Ferry for a 6-yard TD. Lyday ran for the 2-point conversion and the score was 16-0.

“It was good to see Cole stepping up in the pocket and getting the ball where it needed to go,” the coach said.

Butler County had another chance when they moved the ball to inside the Hancock 10 yard line, but they shot themselves in the foot when they left the ball rolling on the field and Lyday recovered…. again.

The Bears later went to the air late in the third and Duncan came up with a big interception on a pass that was tipped by Austin Volocko.

The third quarter came to an end during another Butler County drive and incredible they fumbled again. This time Wathen fell on it and the Hornet offense took over at the Bears’ 28 yard line.

Later in the fourth quarter a Landon Garrison run put the Hornets in scoring position at the Butler County 11 yard line. Garrison then took the handoff on a sweep to the left and the junior converted the touchdown to give HCHS a 22-0 advantage.

Hancock County made a stop on a fourth down try by the Bears with five minutes on the clock and the Hornet offense finished off the game.

Dixon threw down field and Ferry jumped up high to make the grab. Dixon then picked up a first down with hit legs and Lyday completed the drive with a 2-yard TD run around the right side. Sean Young assisted with a nice block on the edge.

Dixon completed 8 of 19 pass attempts for 94 yards with one TD. Ferry made three catches for 43 yards and one TD. Keown had four receptions for 38 yards, and Duncan caught one for 13 yards.

Ross Powers had 13 assists to lead in total tackles, while Wathen made five solo stops and six assists with two tackles for loss. Duncan made 11 tackles (one TFL), Weatherholt had 11 stops,  Roberts had nine tackles (one TFL), Volocko had eight stops, Lyday had seven with two TFLs, Basham had seven (one TFL), Garrison made five tackles, Luke Pritchard three, Zach Richards made two and one sack, Cooper Jones and Colin Johnson had two stops each, Aiden Thrasher had one tackle for loss and Ward made one tackle.