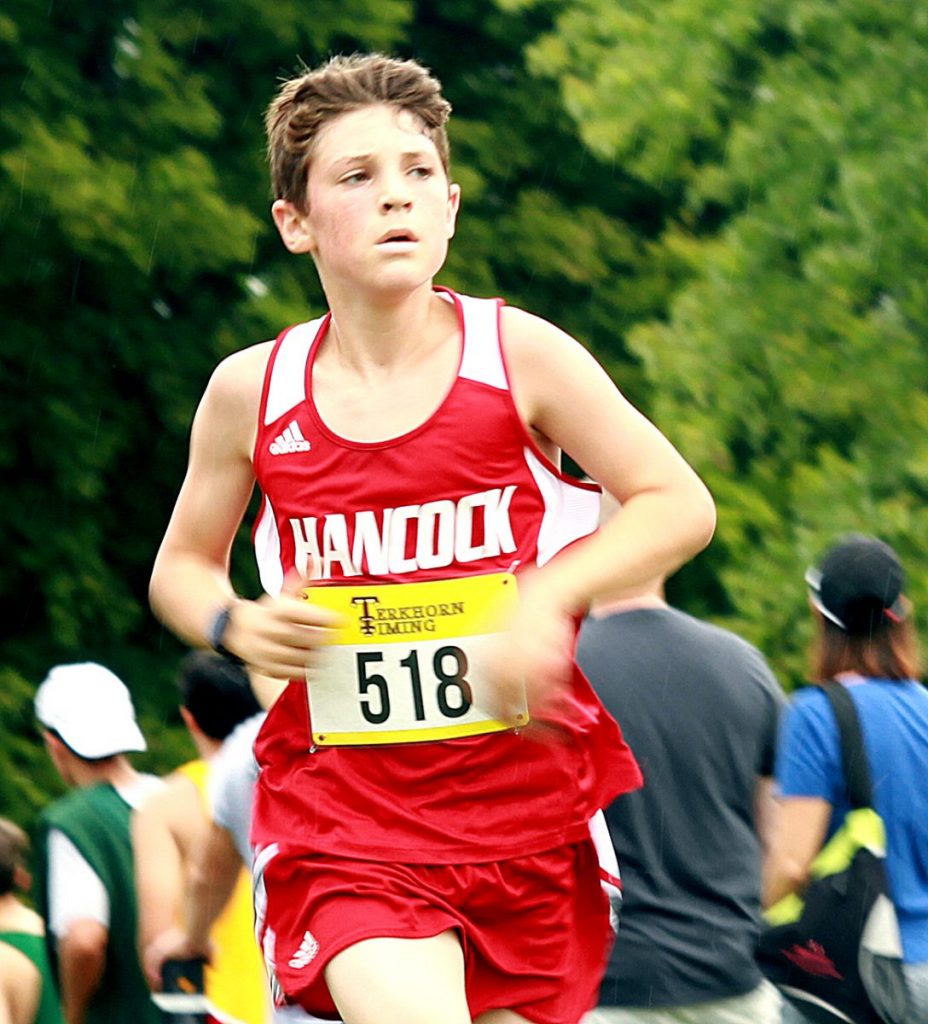 Ellen Meserve and Elias Meserve both won first place in their respective divisions during an elementary cross country meet at Yellow Creek Park in Owensboro Tuesday.

“We had many highlights in this meet,” HCHS coach Wes Meserve said. “Ellen and Elias both won by over 100 meters and broke our 1K records in the process.”

Elias Meserve took first place in the K-2 boys division with a time of four minutes, forty-two seconds over 1,000 meters. Beckham DeJarnette placed fourth in 5:04, and Kash Lomax finished in 7:25.

Ellen Meserve won the girls 3rd-5th grade division with a time of 4:32. RyLynne Meserve placed fourth and Lily Bernardi was sixth. Both girls live in Hancock County but run for other schools. There times were not reported.

“I was very impressed with Beckham placing fourth as a first grader and Oonagh placing ninth as a third grader,” the coach said.

“Even though they don’t run for H.C., RyLynne and Lily both had great performances and represented our community well. In a Daviess County meet, with those two included, our county accounted for four of the top 10 and five of the top 11 runners in the 3rd-5th grade races,” Meserve said.

Lexus Ralph was the lone Hancock County varsity girl competing. She placed 45th out of 131 in the 5K race in a time of twenty-three minutes, forty-three seconds.

“Lexus was pretty disappointed with her time,” coach Meserve said. “She wanted to go head-to-head with some of the better runners in our region. Three placed ahead of her.

“Cross country is a very mental sport and I think she’s still struggling with focusing on her goals when she gets into the tougher stages of the race. She’s figuring it out, but it takes time.”

Emmitt Meserve was the lone varsity boy from HCHS. Meserve placed 65th out of 179 runners in a time of 20:15.

“Emmitt wanted to run in the high 18’s or low 19’s, so he wasn’t happy, but this was his first race after being sick. It was his second fastest time in a 5K ever so I thought he ran a pretty solid race.”

Ellen Meserve nearly won the girls elementary 2K race. The fifth grader placed second in 8:56.15 as she crossed the finish line a fraction of a second behind Molly Buckman (8:55.91) of Bardstown.

“Ellen was in first place for about 1,950 of the 2,000 meter race. She runs great but just hasn’t figured out how to close it out. She thought she could just kick with 50 meters to go and hold the other girl off. It didn’t work out that way. She did break our girls fifth grade and under 2K record that was held by Taylor Johnson.”

Elias Meserve was a second place finisher in the second grade and under 2K race. His time was 9:03.

“Elias ran a very good race, as well,” the coach said. “He raced on his own most of the way and still managed to break our elementary 2K record for third grade and under. He never let up and raced hard the entire time. I was very pleased with his effort.”