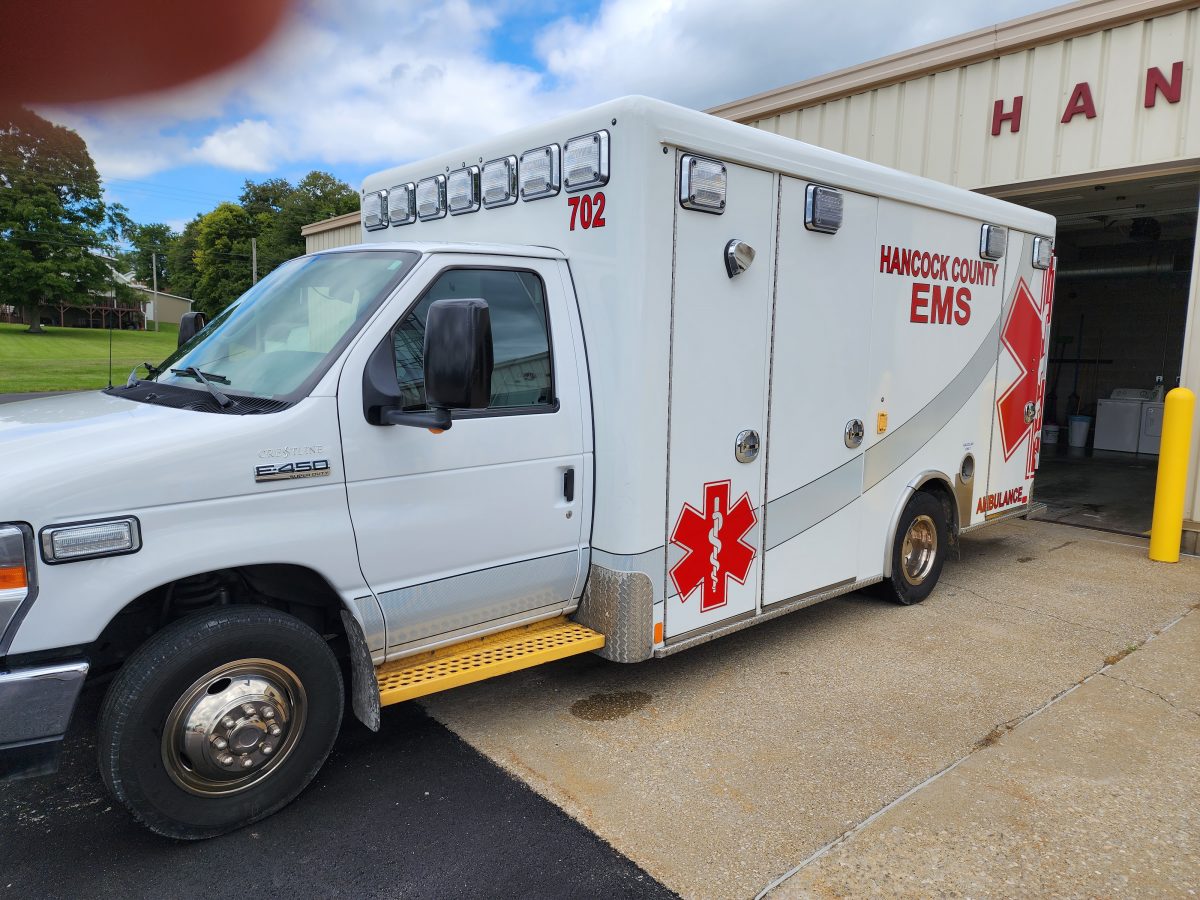 Hancock County Fiscal Court met on Monday, September 12 and discussed with paramedic Damian Rice, Director of HC EMS/911, the need for a new ambulance and the shockingly high cost of the vehicle.

There are currently 4 ambulances in the County and one of those vehicles needs to be replaced.

Purchasing the new vehicle would cost around $340,000 and include: the truck, the bed and the transport cot. (A completely stocked, new ambulance would cost somewhere in the $500,000 range.)

The four completely equipped ambulances that the County already has were purchased in: 2010, 2013, 2019 and 2020.
Rice said they need a new vehicle because the older ones are “aging-up” on miles. “Once they get so many miles on them,” he said, “we start having issues. Right now, we have one that has been down (fuel leak) for quite a few months, because of trouble getting parts. That is a nationwide thing. We have no control over it.”

The ambulance they purchased in 2020, he said, already has almost 57,000 miles on it. The vehicle that it would be replacing has 108,000 miles on it.
“Both of those (2 newest ones) are gasoline engines,” he said. “The year we purchased those, they had quit making the diesel ones. We know with diesel you have longevity. The one we’re going to be replacing – we’re going to go back to diesel. We’ve noticed fuel cost and you get better mileage on them.
And then our 2 older trucks, they both have 146,000 miles on them. Typically, most places, when they reach around 100,000 – 120,000 miles, they go ahead and retire them out.”

Rice says if the new vehicle isn’t purchased now, the price will go up and cost more to purchase in the future.

“The other vendor, which is comparable to them, is also a Canadian company but you have to go through a dealer now,” he said.
With the dealer mark-up, it raised the price significantly. “Just from when we tried to do this bid back in May, it’s went up $60,000. When I spoke to him, he said they were seeing a 20 percent increase, just on materials.”

They are also on a 2-year wait list, partly because of the chip shortage. “If I ordered it today, it would still be a 2-year wait,” he said.
There are two ambulance stations in Hancock County, one in Hawesville and one in Lewisport. They are fully staffed with 6 full-time paramedics and one part-time paramedic, as well as 6 full-time and 3 part-time EMTs.

Rice said that this year they will likely exceed 1,200 ambulance runs – approximately 100 a month. In years past, they would only have 200-300 runs a year on average.
“It’s not just general sickness now, you actually are seeing sicker people – and I don’t have an explanation for that. We’re seeing a whole lot more heart issues,” he said.

When an emergency call comes in to dispatch, they have technology that shows them on the monitor before the phone even rings.
“That’s because that technology uses device-based location and basically as soon as you dial 911, if it’s from an Apple or Android, they send that information to us before the phones ring here. It is more accurate than cell phone carriers,” he said.

“We use an app called Bricks – they send us the coordinates and an address as well. Most people know the areas here. Once you get South County, some people don’t know all the roads. But, for the most part, we’re very efficient in getting to where we need to go.”

Director of Hancock County EMS/911 and paramedic, Damian Rice, says that in the event of a serious cardiac run, their protocol, as outlined by the state, is: “Get you out to the truck, get you to our office, get your blood pressure, put you on the monitor, then we do a 12-lead EKG (Electrocardiogram) and from there we can see all sides of the heart. 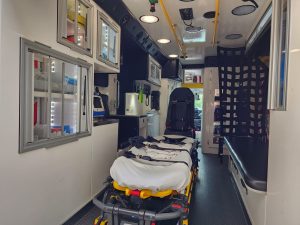 Typically, from there we’d give you aspirin, if you’re not allergic, and nitro for the chest pain which will dilate the vessels and try to bring more oxygen to the heart.
If we feel like it’s a heart attack, some people will go ahead and transmit. And, we have technology now that we can send that 12-lead EKG straight to the hospital, it’ll print out on their copier, we can call and consult with the physician in the ER and say, ‘Hey, here’s what we’re coming in with.’
They can actually activate the Cath lab (catheterization laboratory) from there, before we even get there. There’s been occasions, I’ll run through the door and we can run them straight to the Cath lab. They have a doctor right there.”