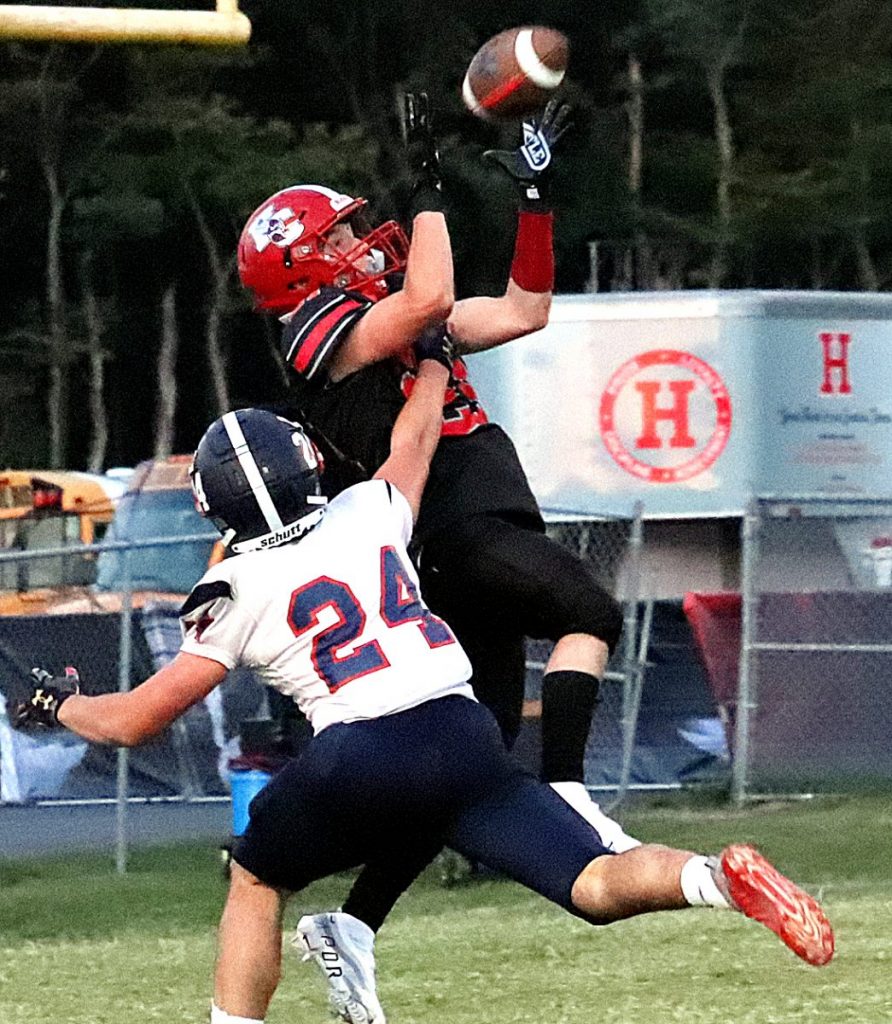 Cole Dixon threw four touchdowns passes and ran for another to lead the Hornets to a 50-0 win over Edmonson County at Schafer–Glover Field Friday. Hancock County improved to 4-0 on the season with the win.

The Hornets opened the scoring with a Dixon to Landen Garrison 41-yard TD pass on the first drive of the game. Dixon shifted to his left then slung the ball to the end zone where Garrison jumped up high to make the catch under pressure from a Wildcat defender.

The HCHS defense stopped the Wildcat offense and forced a turnover on downs at the Edmonson 39 yard line. Logan Willis ran for a first down and a defensive penalty pushed the ball to the 17 yard line.

On the next play Kaleb Keown caught a slant pass across the middle of the field then ran into the end zone for a TD. The Hornets led 12-0 still early in the first quarter.

The Hornet offense got the ball right back and freshman Jack Roberts ran up the sidelines for an apparent touchdown. The play was flagged but Hancock County was not deterred.

The ball was advanced to the 16 yard line when Willis took a handoff and found a hole. The bruising fullback sliced through a gap then raced in for another Hornets TD. Alex Basham scored the 2-point conversion and the score was 20-0.

The Wildcats looked to pass on their next possession but Garrison was ruined the play when he intercepted the ball and returned it to the 13 yard line. The team again looked to Willis and he delivered. The senior finished off the drive with a 5-yard TD and Garrison scored on a conversion run to make the score 28-0.

Edmonson was hurt by a bad snap that got away from their quarterback and they were later forced to punt the back to the Hornets.

Dixon took control on the Hancock County 39 yard line and he struck immediately. With good protection from his line he let go on a long pass play and Austin Volocko made the catch in stride at the 20. The senior cruised in for a 61-yard TD reception, his sixth of the season. The Hornets now led 34-0 and shockingly we’re still in the first quarter.

Aiden Weatherholt burst threw the line of scrimmage and sacked the Wildcats QB on the first play of the second quarter. Lawson Ward made a tackle for loss and the Hornets later took over on downs at the Edmonson 29 yard line.

Jack Duncan took a pitch and looked to score on first down. The senior raced up the sidelines but was called out of bounds at the 1. Dixon then went with a QB sneak and scored on the next play. Roberts converted the 2-points and Hancock County led 42-0.

The Wildcats finally got a drive going and they reached the Hornets 10 yard line. The HCHS defense stepped up and after a bobbled snap Braydon Wathen jumped on the ball, giving possession back to the home team.

The clock was running continuously and the second quarter went quickly. The teams went to their respective locker rooms for halftime.

The Hornets suffered a big blow on the opening drive of the third quarter when Aiden Embry went down with an injured knee. The sophomore lineman was down on the field for a while before getting up with a painful smile on his face. He was assisted off the field and did not return to action.

Hancock County took possession on the Edmonson 25 yard line, but a fumble on an exchange resulted in a recovery for the Wildcats.

Basham made a tackle for a loss when Edmonson was lined up to punt and Hancock County took over deep in Wildcat territory. Moments later Duncan took a shovel pass from Dixon, broke a tackle then sprinted into the end zone for the game’s final touchdown. The 11-yard TD reception was followed by a Drew Lyday pitch to Basham for a successful conversion.

The second half flew by with the running clock and the younger Hornets got their chance to play before time expired.

Dixon completed 7 of 11 pass attempts for 172 yards and four TDs. Volocko had two receptions for 77 yards , Duncan caught two for 40 yards, Garrison had one reception for 41 yards, Keown had two catches for 22 yards, and Alex Madden made a catch for 17 yards on a throw by Dylan Morris.

Willis led the rushing attack with 77 yards on 11 carries, with two TDs. Roberts gained 22 yards and Dixon ran for 19. Chris Gillispie, Wyatt Emmick, Morris and Hayden Shearn all had one carry each in the fourth quarter.