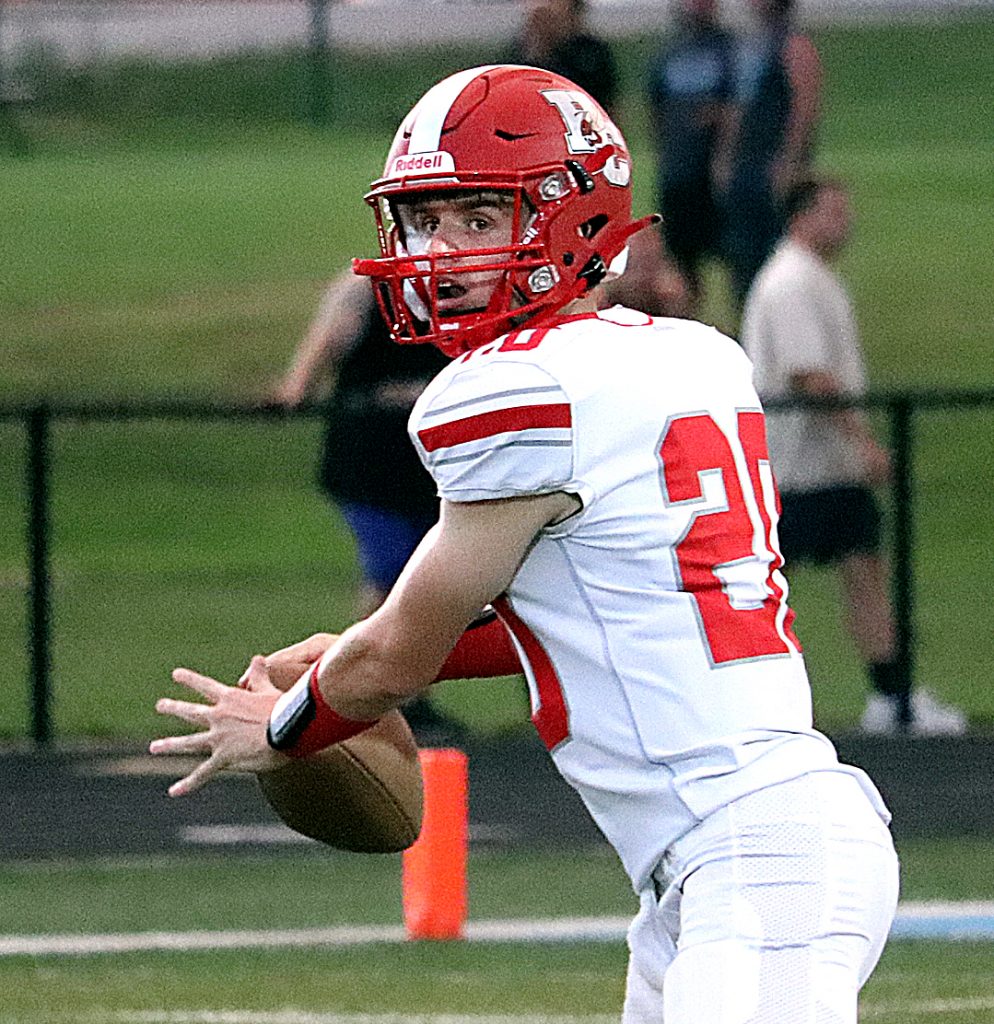 Aiden Weatherholt delivered a big hit that forced a fumble on the opening kickoff and things went downhill from there for the home standing Muhlenberg County Mustangs Friday at Greenville. The Hornets took two plays to reach the end zone for the first of eight touchdowns scored during a 58-0 win for Hancock County.

“It was exciting from the opening kickoff. They turn the ball over and next thing you know we’re scoring. That was the way it went all night. Our defense played great,” HCHS coach Bobby Eubanks said.

A Cole Dixon to Kaleb Keown reception set up Logan Willis’ 1-yard TD run. Alex Basham then crossed the goal line untouched and the score was 8-0.

Quarterback Kanyon Johnson completed two quick passes and the Mustangs’ offense had a first down inside Hornet territory on Muhlenberg’s first drive of the game. That’s as far as they would go.

Jack Duncan burst through the line to sack Johnson and Landen Garrison nearly made an interception on the following play. The Mustangs later punted and never again threatened to score against the mighty Hancock County defense.

The Hornets took possession on their own 38 yard line and one play later they were in the end zone. Dixon rolled to his left and threw a strike to a wide open Austin Volocko, who made the catch at the 20 and cruised in for a 62-yard TD. Drew Lyday added the 2-point conversion and the score was 16-0 still early in the first quarter.

Duncan recorded another sack on the Mustangs’ next drive after he, Aiden Embry and Braydon Wathen all crashed into the backfield. Weatherholt dropped Johnson for a loss and the Mustangs were forced to punt from their own 12 yard line. The Hornets nearly blocked the punt and after a forward bounce Garrison grabbed the ball at the 40. The junior made one defender miss then raced in for anotherHancock County TD. The score was now 22-0  with 6:22 still remaining in the first quarter.

Duncan and Weatherholt both had QB sacks on the Mustangs’ next drive and the Hornet offense took over at their own 45 yard line.

Hancock County went to the air right away and Dixon again rolled to his left. The senior unleashed a pass to Keown and the connection went for a 55-yard TD. The Hornets now led 28-0 and we’re still in the first quarter.

Colin Johnson and Ross Powers dropped Johnson for another sack after a wild snap that had the QB running backwards. It wasn’t a good look for the Mustangs in front of their home crowd and they were forced to punt from their own end zone.  The kick was nearly blocked again and the Hornet offense took possession at the Muhlenberg County 18 yard line.

Keown took a short catch and worked the ball to the nine. The offense was pushed back to the 17 yard line after a penalty and Dixon went to the air again. This time he found fellow senior Evan Ferry in the end zone. Ferry made a nice catch for the TD and after a Lyday to Keown conversion the score was 36-0.

For the second consecutive week the Hornets had a running clock early in the second quarter.

Weatherholt forced another Mustang fumble after a hit and Aiden Thrasher made the recovery on the Muhlenberg 46 yard line.

A nice run by Duncan followed by a Dixon to Volocko pass play gave the Hornets a first–and–goal at the three yard line. Duncan took the handoff and bulled his way in for the TD. Willis scored the extra points and the score was 44-0.

Weatherholt was again in the Mustangs backfield and he dropped the QB for another sack and a big loss.

The Hornets took over and Willis rambled for big yardage. The fullback gave HCHS a first–and–goal at the eight yard line. Willis later scored on a 3-yard TD run and Keown made it 52-0 on a conversion pass from Lyday.

Hancock County received to begin the second half and Volocko made a nifty run to midfield. Runs by Willis, Basham and Lyday set up the Hornets final touchdown when Lyday faked a handoff and threw a dart to Keown for a 13-yard TD.

The younger players got their chance to play the rest of the way and they performed well to preserve the shutout.

“We probably held them to negative yards overall. I don’t know if we’ve come out and dominated a team like that since I’ve been around Hornet football. It was impressive to watch,” the coach said.

Weatherholt and Duncan led the way for the Hornet “D”. Weatherholt had 10 tackles, one tackle for loss and 3.5 sacks. Duncan made 10 stops, with one TFL and three sacks.

Keown had four catches for 101 yards and two TDs. Volocko had two receptions for 90 yards and one TD.  Ferry caught one ball for a 17-yard TD. Duncan had one catch for 16 yards, and Chris Zablocki had one reception for five yards.

Willis led in rushing with 69 yards on five runs, with two TDs. Gillispie gained 16 yards on three carries, Roberts ran once for 14 yards, Hayden Shearn rushed for 11 yards, Basham and Lyday had eight yards each, Morris ran for five yards, and Duncan picked up three yards and one TD. 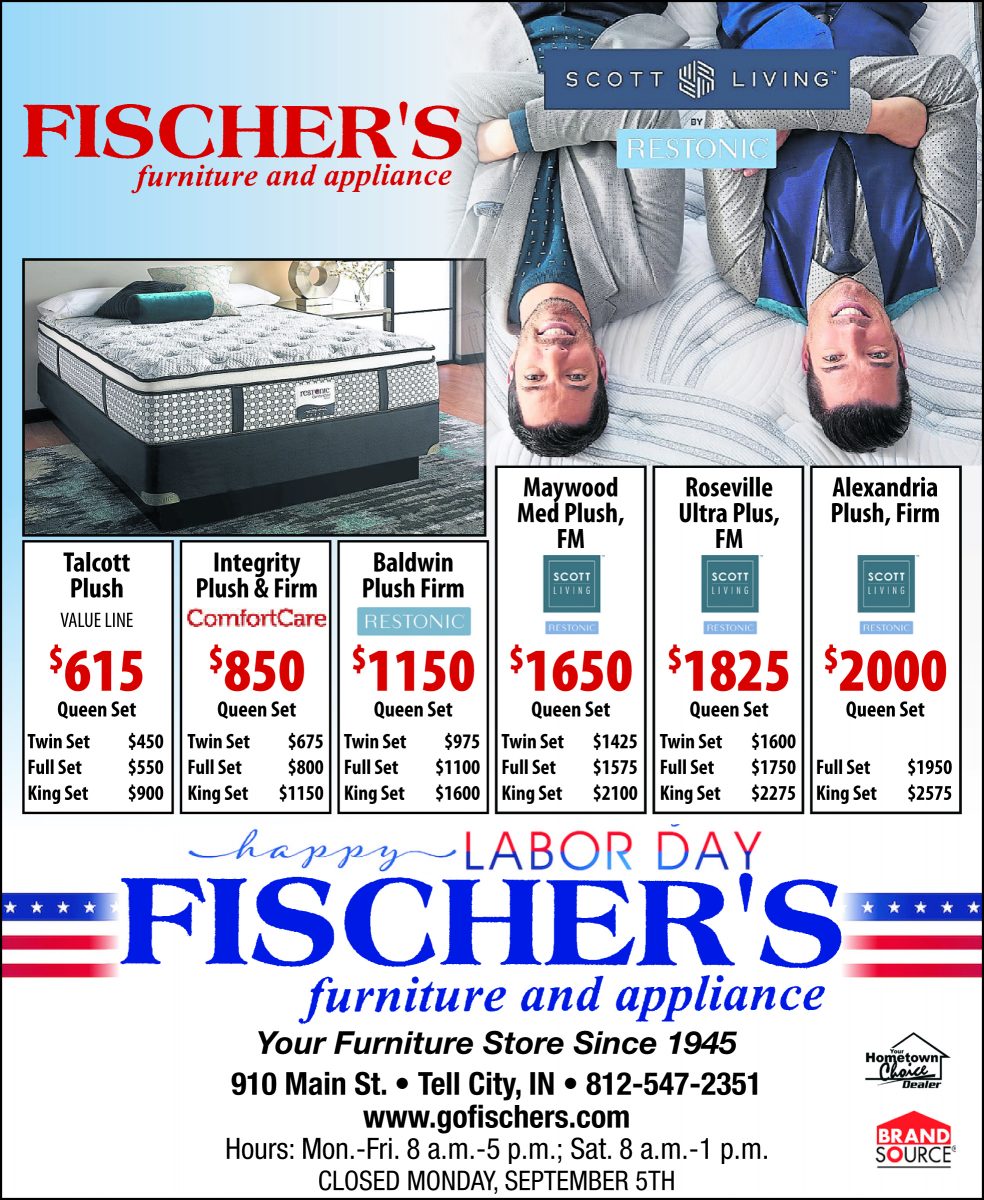