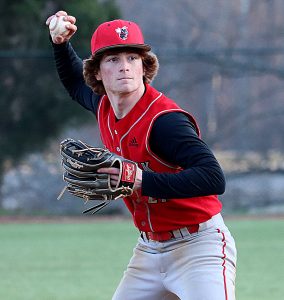 Jake Frames smashed a home run and the Hornets plated 15 runs in the third inning to win 17-2 over McLean County at Calhoun Monday. The contest ended after three frames via the 15-run rule.

Hancock County went ahead 2-0 when Frames belted a 2-run shot in the second inning.

The Hornets batted around the line up twice while scoring 15 runs during the third. Austin Volcko and Kaleb Keown had two hits each in the inning and Ryan Jones hit safely. Hunter Severs took two for the team when he was hit by a wild pitch twice in the same frame. Jack Roberts and Andrew Boutcher each hit a sac fly and they were both hit by a pitch.

The Cougars scored two runs in the home half of the third before Ryan Ogle recorded the final out.

Ogle got the win on the mound. He allowed two unearned runs on four hits, with four Ks and one walk over three innings.

The Hornets rallied in the seventh inning only to fall short by a run during a 4-3 loss to Meade County at Brandenburg Friday. Hancock County out hit Meade 11 to 6.

The Greenwave scored a run in the first inning and three more in the fourth to lead 4-0.

Andrew Boutcher started the seventh inning rally when he singled with one out. Austin Volocko followed with a base hit and two batters later Kaleb Keown knocked in Boutcher. Jack Duncan then ripped a shot that brought in two runs, but the junior was tagged out at third base for the final out.

Jordan Payne absorbed the loss on the mound. He allowed four runs (three earned) on two hits, with four Ks and one walk over 3.2 innings. Sam Walz allowed no runs on four hits, with two Ks and no walks in 2.1 innings pitched.

The Hornets had a runner in scoring position when Duncan tripled in the fourth inning with two outs. Severs singled and reached second base in the sixth, but both he and Duncan were left stranded. Hancock’s final opportunity came in the seventh when Logan Willis had a base hit. He later reached third before the final out was recorded.

Brock Tindle took the loss on the mound. He allowed six runs (four earned) on 10 hits, with one K and one walk over five frames. Walz allowed two runs (one earned) on three hits in two innings of relief.