The Thomas C. Summers and J.L. Rogers Buildings in downtown Greenville were destroyed by fire the morning of April 7. Three other structures were damaged from heat and water, and are likely to be demolished. The Summers building was the second-oldest commercial structure in the city, built in 1877. The Summers building had housed the first telegraph office in Greenville.

Just a couple weeks ago, I shared a feature on attractions in Muhlenberg County, where I live, the first in what I hope are many features of easy day trips to interesting places in Kentucky and southern Indiana.

Though the bulk of the feature focused on the musical history of the “Home of Thumbpicking,” there was a brief mention of the county seat of Greenville.

“Greenville is the county seat of Muhlenberg County, and is highlighted by stately homes built by some of the early coal-mining millionaires, as well as a well-maintained Main Street lined with late-19th and early 20th Century structures. Downtown Greenville is watched over by the historic 1907 Muhlenberg County Courthouse, which is topped by a Baroque octagonal cupola and four-faced clock.”

In the early morning hours of April 7, around 3:30 a.m., four of those historic buildings were destroyed and heavily damaged in a fire, which has left a scar in the picturesque small town.

At the northeast corner of Main Street and Main Cross Street, stood two three-story buildings, magnificent structures which some of us local history nuts often joked were the “skyscrapers of Greenville.”

On that morning, flames were discovered in the upper floors of the so-called J.L. Rogers Building. Fire crews from the city, as well as Central City and county volunteer departments responded. The Madisonville Fire Department, Auburn Fire Department, and Ohio County departments later responded as the situation worsened.

At first, there were hopes the fire could be contained, but by 4:30 a.m., it was obvious the day would see the streetscape forever changed, as flames could be seen on the third floor of the Thomas C. Summers building, the second-oldest commercial building in the city.

Built in 1877, the building was home to one of Greenville’s newest businesses, The Corner Piece Café, which had opened only three weeks earlier. I was lucky enough to have had a BLT from the business shortly after they opened.

Today, those buildings are no more. With the Summers and Rogers buildings gutted by fire, floors pancaked on top of the other, for safety’s sake, an excavator was brought in to bring the outer brick structures to the ground. All that was left as morning broke was a pile of rumble, accompanied by the acrid odor of charred lumber and wiring.

Sadly, the destruction did not end there. Two two-story buildings on the northern end of the larger structures were also damaged by flames and water, and are expected to be brought down very soon. The W.C. Malone and E.N. Martin buildings were built in the mid-20th Century. The W.C. Malone is the same man who donated land for what would become Lake Malone State Park.

To say the buildings represented the community’s past, and its embrace of the future, is certainly an understatement.

Standing there in the rain Friday morning, looking over the remnants of these wonderful examples of Small Town, U.S.A., character and existence was a bit much for me: there was no way to hold back the tears. 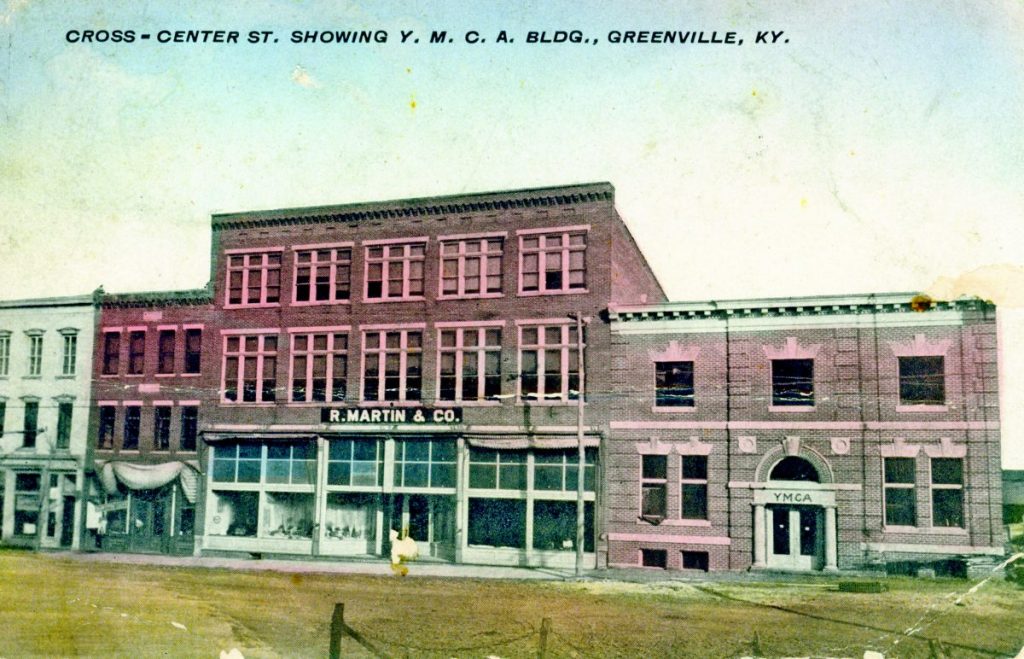 Fire is nothing new to Greenville, as is true with many downtown areas across our country. One of the largest buildings to ever grace downtown Greenville was the R. Martin Dry Goods Store, a high-ceiling, three-story structure which once towered over the Rogers building. A fire on Christmas Eve 1942 destroyed that structure, partially damaging the buildings taken down Thursday morning.

The loss of these buildings is a huge blow, not only for the economic and business loss, but also for the appeal for those who want to see a well-preserved Southern downtown. Anytime I visited my friends Ben and Jennie Duvall’s coffee shop, Sip&Spin (incidentally, now the second-oldest commercial structure in town), that group of buildings is what I looked at while sipping an Americano out front.

We conducted walking tours and historic reenactments alongside those buildings, dreamed of future use for them, leaned against them when talking with out-of-towners.

Now they are gone, and with them, a large part of the hearts and minds of generations of Muhlenberg Countians.

Certainly, something will come along to rise in their place, but nothing can ever replace the community memories collected inside their walls: the first telegraph office in Greenville, a banking headquarters, the offices of Kentucky Utilities, among many of other past uses.

We understand all things change, but when that change is brought upon us by destruction, it feels like a punch to the gut and a reminder how fleeting the physical world can be.

Greenville will go on, but none of use will ever look at the corner of Main Street and Main Cross Street the same way, ever again.

C. Josh Givens is a reporter. Though native to Butler County – and reared in Logan County – he proudly calls Muhlenberg County home.