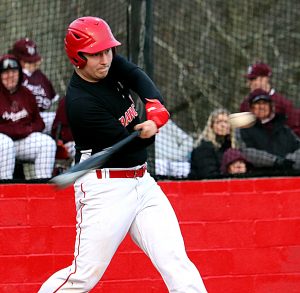 Jake Frames drove in five runs and Logan Willis smashed a home run as the Hornets won 16-6 over McLean County on Monday at Vastwood Park.

“We stayed patient at the plate and when we got early fast balls we jumped on them,” HCHS coach Brad Keown said. “It’s early right now and it’s been frustrating but we’ve definitely got the talent to make a good run again this year.”

The Cougars led 4-1 in the third inning when the Hornets rallied. Hunter Severs, Drew Lyday and Kaleb Keown all scored on McLean County errors and the score was tied at 4-4 with no outs.  Ryan Jones and Frames set the table and Willis cleared the bases with a 3-run shot that cleared the fence in left-center field.

McLean pulled to within one run (7-6) after plating two runs in the fourth before the Hornets blew the game open.

Andrew Boutcher got a 1-out base hit in the fifth and Hancock had runners at first and second when Austin Volocko was hit by a wild pitch. Boutcher scored on an error before Keown delivered a 2-run double that made the score 10-6. Frames later brought home two more runs with a base hit and the Hornets led 12-6.

Hancock County plated two more runs in the six before Frames stroked a 2-run double to end the game via the 10-run rule.

Sam Walz got the win on the mound in a relief role. He allowed two runs (none earned) on two hits, with four Ks and one walk in 3.2 innings. Jake Ogle started and allowed four runs on four hits, with one K and two walks over 2.1 innings. 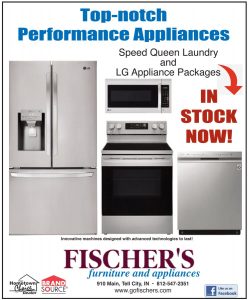 The Hornets picked up their second win in a row when they knocked off Henderson County 10-5 here Tuesday.

“We were down 4-1 but we kept our heads up and looked at a lot of pitches. When we got pitches to hit we were able to capitalize with runners in scoring position,” the coach said.

Hancock County took the lead in the first inning when Kaleb Keown singled in Austin Volocko.

The Colonels countered quickly by plating three runs in the second and one in the third for a 4-1 advantage.

The score remained unchanged until the decisive sixth inning when the Hornets had nine base runners cross home plate. Hancock County had just one hit in the inning and that’s all they needed, as Henderson County pitchers issued eight walks and added two hit batsmen for good measure.

“We stayed patient at the plate and that’s been our biggest struggle this year. We set on the curve ball and waited for good fast balls. Then Logan came in and shut them down,” Keown said.

The Colonels’ lone run came in the seventh before Logan Willis got the final out via strike out.

Willis got the win on the mound in a relief role. He allowed one run on two hits, with five Ks and no walks in two innings. Brock Tindle started and allowed four runs (three earned) on four hits, with three Ks and four walks over five frames.

Keown was 2 for 3 with the double and two RBI, and Ryan Jones was 1 for 3 with one RBI. Keown had a sacrifice and Jones stole a base. Volocko scored two runs while Drew Lyday, Jones, Jake Frames, Hunter Severs, Dec Lewko and Andrew Boutcher all scored one each.

“Brock commanded the game the whole way,” the coach said. “He filled the strike zone up and we had good defense behind him.”

Tindle gave up a first inning single and that was it. The Red Devils went down quietly through the first five frames.

Owensboro got a base on balls with one out in the sixth and the next batter reached base on a defensive error. A wild pitch and a walk later and the Devils had the bases loaded. Tindle struck out the next batter and Ryan Jones got the third out on a ground ball to second.

Hancock County got a lead off walk by Drew Lyday in the home half of the sixth. The Hornets quickly had runners at first and third after a base hit by Kaleb Keown. Keown stole second and Jake Frames took one for the team to load the bases. Jones then knocked in Lyday (pinch runner) and Keown scored on an Owensboro error to make the score 2-0.

The Red Devils went down 1-2-3 in the seven as Hancock County secured its first win of the 2022 season.

Tindle earned the win on the mound while allowing no runs on one hit, with 10 Ks and two walks over seven complete innings.

The Hornets got just two hits themselves. Jones was 1 for 1 with one RBI and Keown was 1 for 2. 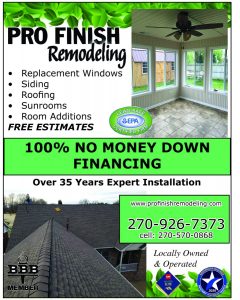 The Panthers jumped out to a 3-0 lead in the top of the first inning and later added two insurance runs in the fifth. The Hornets got a run in the first when Lyday singled and scored (courtesy runner) on a double by Keown. Severs scored the team’s final run in the third when he singled, stole second and scored on another hit by Keown.

Jordan Payne took the loss on the mound. He allowed five runs (three earned) on six hits, with six Ks and three walks in 4.2 innings. Volocko allowed no runs on one hit, with one K and no walks in 2.1 innings of relief.

Keown was 2 for 4 at the plate with two RBI. Lyday was 1 for 4. Severs and Taylor scored one run each.

Muhlenberg County turned a close game into a rout when they won 11-0 over Hancock County at Vastwood Park Thursday.

The Mustangs plated three runs on five hits during the first innings. The Hornets settled down defensively until all heck broke loose in the fifth.

Muhlenberg scored five runs on four walks and a hit batsmen then added three more runs in the sixth. Hancock had runners in scoring position in the second, fifth and sixth frames but could not convert.