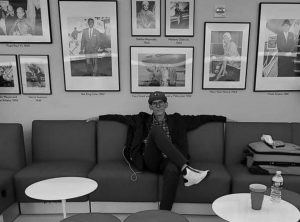 I’m writing this from the air. I’m in a plane on mine and Jamie’s big trip to New York City where we hope to do something other than give me medicine and puke.

As we prepared to take off, they described the floatation devices, oxygen, overhead lights, etc and I remember thinking, “Well they’ve thought of everything.”

Then I looked at the safety pamphlet in front of me and saw a section on what happens in the event of a water landing. It showed a little drawing of the door that said something like “don’t open the door if water is above the sill,” presumably because it would cause the plane to sink.

That seems like a huge responsibility to place on whatever random person finds themselves standing on front of said door, trying to choose whether to save everyone’s life or sink the plane and doom us all.

Later, as the flight attendants worked their way down the aisle asking for drink orders I watched as the first one asked maybe three people what they wanted. I was impressed that she didn’t write anything down. Then the other attendant was asking like seven people what they wanted without writing it down. Wow! I imagined her repeating each order as she walked back to grab them. “Coke, water, Coke, Sprite” etc.

Now SHE was someone we could trust to choose whether or not to open the sinking plane door.

I was enthralled by the show so I watched as she returned with the drinks. Then I watched as she handed one guy a Coke and then traded it for the Sprite he actually ordered, then watched as she paced around, looking lost as she held the cans out hoping someone would claim them. She didn’t remember after all. Appearances can be deceiving.

The flight got less eventful after that.

I watched as everyone’s heads swayed in unison to the turbulence.

This is a good trip so far.
dave.hancockclarion@gmail.com