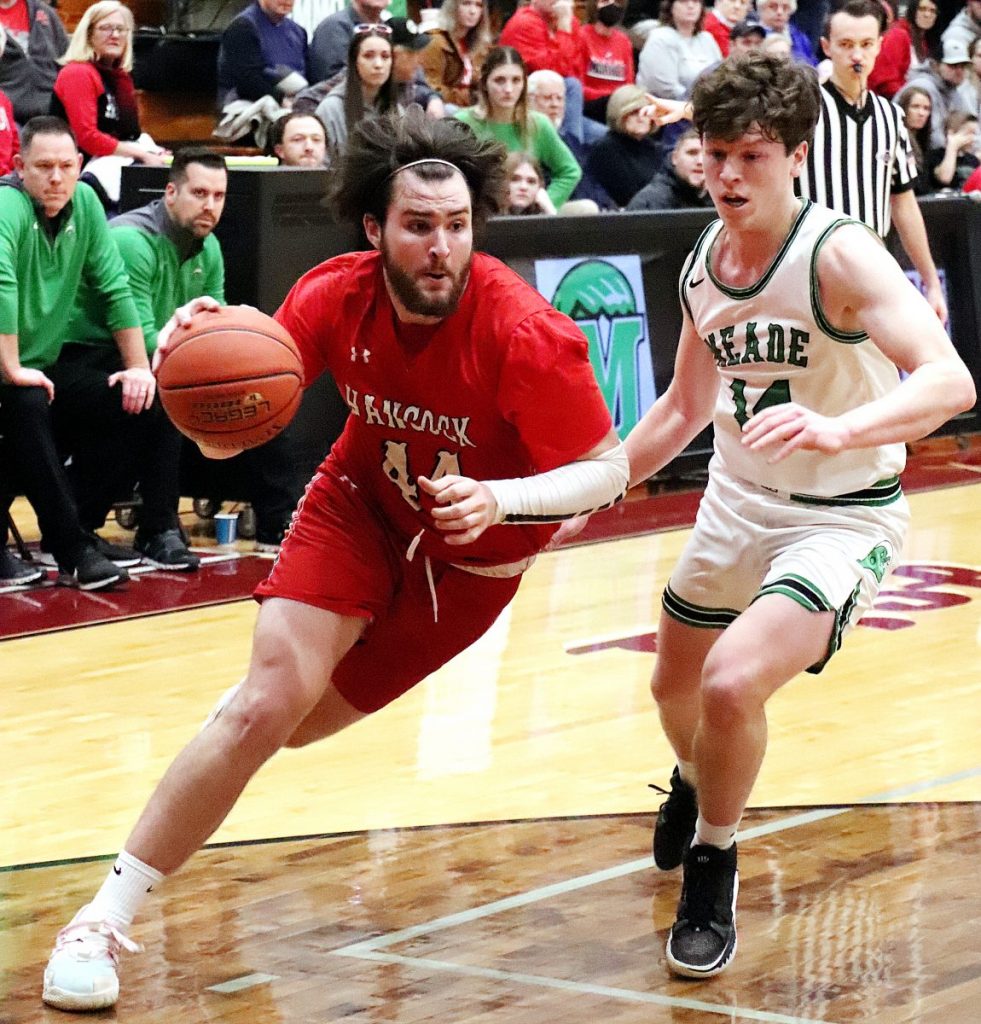 Meade County used slick passing along with sharp shooting to win 59-47 over Hancock County in the 11th District championship game at Harned Friday. Both teams advanced to the 3rd Region tournament, which began Wednesday.

“Meade was a tough matchup for us this year. They go with four guards, they spread us out, and we struggled,” Hornets coach Mike Orr said.

Kaleb Keown and Ryan Ogle each knocked down 3-point baskets to tie the score at 10-10 midway through the opening frame. The Greenwave countered with multiple 3’s by Trent Knoop and Peyton Johnston as Meade County built a 19-12 advantage.

Ogle scored twice in the paint early in the second period and the Hornets were within four points, trailing 21-17. Kyle Parker answered with a “3” from the top of the key and a layup by Knoop put Meade ahead 26-17 with under four minutes remaining in the first half. Devyn Powers and Evan Ferry later scored at the rim for Hancock, but the Greenwave managed to push their lead to 11 points (34-23) by halftime.

Keown scored on a nifty pass from Ogle to begin the second half and the Hornets were prepared for a battle. Knoop responded with a 3-pointer from the wing and Meade’s center Blake Edwards made a layup to put his team ahead 39-25.

Powers hit a big “3” when the Hornets needed it but further attempts from beyond the arc proved fruitless through the remainder of the quarter as the Greenwave increased the lead to 15 points (45-30).

Meade later led by 17 points in the fourth when Ferry began to find his range. The Hornets point guard scored four consecutive points to keep Hancock County in touch. A steal by Landyn Emmick and solid board work by Keown gave the boys a chance. Luke Brown hit a basket from the baseline and the score was 47-36 with 5:20 on the clock.

Meade County began to work the clock as time was on their side. Edwards and Keown traded baskets and Powers hit a “3” to cut the lead to 10 points at 51-41. That was a close as the Hornets would get as Greenwave players hit 6 of 6 from the foul line down the stretch to seal the victory and the district title for 2022.

Meade County made 8 of 11 free throws. Shooting stats were not available.