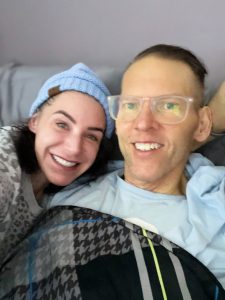 Jamie and Dave pose for a selfie during a recent hospital stay.

Well, it’s official. I got the “There’s nothing more we can do” talk from my cancer doctor Monday.

Talk about a major bummer.

I knew something bad was coming when, after asking me a few questions, he looked at the floor and started wringing his hands.

Then he kind of stammered and mumbled a few things I don’t remember, but he finally got the point across that he was worried that continuing chemo would actually shorten my life.

He was recommending that I stop chemo and just focus on being comfortable until the inevitable end.

Chemotherapy lowers my whole blood cell counts, which would make me susceptible to things like pneumonia and sepsis, both of which I’ve barely survived twice in recent months. And I currently have a lung infection that we have to watch closely to see if it’s spreading more because it could kill me.

Now I have till Thursday to decide whether I want to gamble with this new chemo regimen or if I want to call Hospice and hope that my last however many months are comfortable.

But I’m not really sure what that means. I know that going back to the hospital will be similar to my other stays and the pretty awful things I’ve endured there, but what does it mean to make yourself comfortable until you die?

I can’t imagine any good scenario where I’d be comfortable as I’m dying. If you’re dying, doesn’t that just come with discomfort by default?

I’m hoping it doesn’t mean being so sedated that I’m asleep the last few months so I’m effectively gone long before I really am.

In that case I’d rather be on chemo and be alert and available to those who know me and then have a big dramatic exit.

I have a lot of praying to do and it’s hard to even fathom weighing my options and the good and bad for each.

But this is something that I must decide, and the end is coming, just as it is for all of us. There’s no skipping this one.

The only comfort in this is knowing that God is bigger than this situation and that he will give me the same peace he’s given me up until now.

But please pray for me and my family as we make a decision and begin the journey of whatever I decide.

Next week I’ll detail my decision and why I made it for those who are interested.
dave.hancockclarion@gmail.com