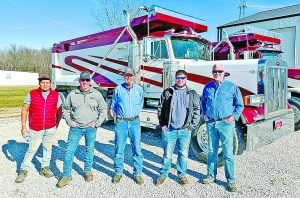 Crewmembers from Stroup Farms went to the tornado-ravaged community of Bremen in Muhlenberg County on Dec. 13 to assist with cleanup and recovery efforts. Those assisting in the community were Gabriel Morales, Jason Driver, Jimmy Smith, Tanner Stroup and Rodney Bran. Danny Mattingly also volunteered, but was not available for the photo.

In the aftermath of the devastating tornadoes which carved a path through west and south central Kentucky Dec. 10-11, Tanner Stroup of Stroup Farms in Maceo felt drawn to help those affected.

Stroup gathered five farm crewmembers, loaded up some heavy equipment and headed west to Muhlenberg County and the tiny community of Bremen on Dec. 13.

“After the storms, I felt we could do something to help,” Stroup said. “It was the least we could do for people who lost everything.”

The historic storms claimed 77 lives across eight counties – mostly in Graves and Hopkins counties – damaging and destroying thousands of structures. In Bremen, more than 100 homes and buildings were destroyed, and 11 people died.

Stroup and his crew came into Muhlenberg County with excavators, skid steers, chainsaws and dump trucks, posting their efforts on May Apple Lane in Bremen. This neighborhood of the community of 300 people was among the hardest hit in the small town.

“The roads were starting to be cleared when we got there, so we hauled off structure debris and trees … a lot of trees,” Stroup said. “I was humbled by the damage, but also by the volunteers who came out and gave of themselves. My guys donated their time; we had the equipment to help so that’s what neighbors do for one another, even if you don’t know them.”

Stroup, 27, said the experience was his first time in such a disaster zone and that it was eye-opening to see the destructive power of Mother Nature.

“The community was very thankful to have us there, and the fed us very well,” he said. “Folks were constantly coming by to see if we needed food or anything else. We heard so many stories from those affected about how they survived.”

Stroup said after seeing the aftermath of the storms, he will be paying much attention to future storm warnings.

“I don’t know how much you can prepare for storms like that, but it has gotten us all thinking,” he said. “I will be taking it much more seriously. We all know to go to my Dad’s basement in the next storms, and when I build a house, there will be a storm shelter.”

The young farmer returned to area a few weeks later and said progress is being made with the cleanup, but recovery and a return to “normal” will take quite some time.

Stroup has been involved in farming in Hancock and Daviess counties since he was 12, and today is in partnership with his father, Randy Stroup; sister, Cessilee Blair; and wife, Sarah Stroup.

Disaster recovery efforts are continuing across west and south central Kentucky, as most state and federal agencies have made contact with most of those affected in the storms.

Fundraising to aid in the years-long recovery are still ongoing, with the most popular charitable funding at the state level with the Team Western Kentucky Tornado Relief Fund. The donation site can be found online at https://secure.kentucky.gov/formservices/finance/WKYrelief

The Muhlenberg County Long Term Disaster Recovery Committee is another donation organization. The volunteer committee was formed in 2008 following another destructive tornado in the community. You can contact Dr. Freddie Mayes, chairman, at 270-754-9603. The committee also has a Facebook page.