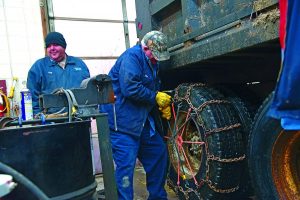 Hancock County government was busy Wednesday preparing for an ice storm warning issued by the National Weather Service for areas across Kentucky by the Paducah and Louisville offices.

Judge/Executive Johnny “Chic” Roberts said Wednesday emergency management and Road Department officials were following the forecast closely, and attempting to prepare the best they could

“It is critical for safe transportation that we get our Road Department treatment of roadways out there just as the transition from rain to frozen precipitation begins,” Roberts said. “You cannot pretreat roads if there is rain ahead of the storm, so it does present us with some challenges.”

Roberts and emergency management were scheduled for a 1:30 p.m. conference call with state and regional authorities Wednesday after Clarion press time.

Workers were installing chains on the trucks, along with assuring supplies of the salt/sand mixture used by the county was ready to go.

NWS issued an ice storm warning at 3:34 a.m., Wednesday, from 6 a.m., today through 6 a.m., Friday. The warning states “Significant icing is expected. Ice accumulations of one-quarter to one-half of an inch are expected. In addition, up to an inch of sleet and snow will be possible.”

Impacts expected with the storm include scattered power outages and tree damage. Travel is expected to extremely hazardous, and impossible in some areas.

“While we don’t know what exactly will occur, we will be ready for it,” Tindall said. “With the window of when the icing will be begin, the department will consider the drivers taking the trucks home with them so they can begin treating immediately. The guys trying to get to the shop on icy roads is pretty dangerous.”

Kentucky’s rural electric cooperatives were also busy preparing for the impending storm, with co-ops communicating with one another about crew availability in the event of widespread damage to the distribution system.

“Ice and tree limbs falling on power lines can cause lines to snap off the poles or the poles to break,” said Chris Perry, president and CEO of Kentucky Electric Cooperatives. “That can bring power lines into contact with the ground, trees, homes, vehicles and other objects. If people or pets come in contact with a live power line, they can suffer serious injury or even death.”

Governor Andy Beshear said Wednesday Kentuckians should be prepared for a widespread impact from the storm.

“We are seeing as far south as Bowling Green, and hitting our major metropolitan areas, what could be a very dangerous event,” Beshear said. “Everybody start making plans, start taking precautions, make those alternative plans that you may need to use Thursday and Friday. Most importantly, stay safe.”