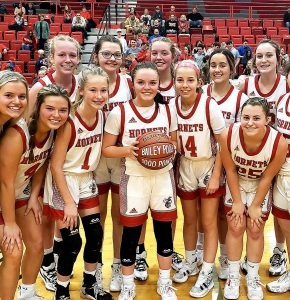 Bailey Poole reached a career milestone when she scored her 1,000th point during the Lady Hornets’ 61-45 win over Muhlenberg County at HCHS Tuesday.

“I’m really proud of the girls and how we came out against Muhlenberg. We were the more aggressive team for much of the night,” HCHS coach Kevin Husk said.
Hancock County took control of the game in the first quarter and never looked back. Lily Roberts scored nine points during the first frame while Emma Morris, Ella House and Poole all chipped in offensively. All the aforementioned girls hit 3-point baskets during the second period and the Lady Hornets led 38-20 at halftime.

The Lady Mustangs tried to make a game of it after intermission and they did win the third quarter (13-11). But, the Hancock girls took care of business early in the fourth by reasserting their dominance.
The game was paused during the final period when Poole hit a free throw to reach the career 1,000 point mark. Poole smiled as she received applause from the entire audience. She was presented a signed basketball by her coaches and teammates before the game resumed.
“It was great to see such a great crowd out tonight and that made Bailey’s 1,000th career varsity point extra special,” Husk said.

The Lady Hornets connected on 8 of 9 foul shots down the stretch to help secure the 16 point victory.
Roberts finished with 20 points and Poole scored 19. House had 15 and Morris seven.
Sarah-Cate Bogges led MCHS with 12 points.

Lady Hornets win
The Lady Hornets put a notch in the win column when they defeated Fairdale high school 53-23 in Louisville last Thursday.
“I’m proud of the girls as they played hard and together. We came out and gave the kind of effort I was looking for,” HCHS coach Kevin Husk said.
Hancock County took control when they won the opening quarter 19-3. Bailey Poole and Lily Roberts came ready to play as they scored nine and eight points respectively to lead the Lady Hornets. HCHS increased the margin to 17 points by intermission.
Husk’s charges returned to the court after halftime and shut down any thoughts of a comeback the Lady Bulldogs might have had. Kendra Keown and Poole led the way offensively as five players scored for the Lady Hornets. The score was 45-15 after three.
The younger girls got their chance in the fourth and Ansley House made two baskets while Keown and Jadan Roberts also scored.
“In games when you’re ahead by a lot it can be hard to stay disciplined and focused. I thought our girls did a good job in that regard for most of the night,” Husk said. “There were a few things we asked the girls to do at halftime and our girls came out and executed. This was a good all around team win.”