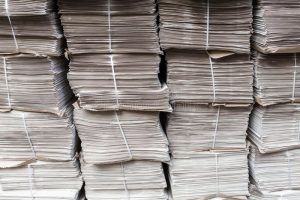 Subscribers of the Hancock Clarion in some areas of the county, as well as surrounding counties, are experiencing difficulties in receiving timely delivery of their paper by the U.S. Postal Service.

Clarion Publisher/Editor Donn Wimmer said the situation is frustrating not only to subscribers, but also to Clarion management.

“We understand subscribers need their paper as soon as possible, and we desire them to have it when they expect it,” Wimmer said. “There are several factors contributing to the issues, and we speak almost daily with those involved to try and solve the problems.”

Wimmer explained that for years the Clarion has been printed at a plant in Shepherdsville. There the paper is labeled, bundled and divided into postal tubs. The papers are then delivered to Tell City, where they are picked up by a driver and delivered to the required post offices for mail delivery.

This is where the matter gets a bit muddled through a variety of circumstances.

The company which had owned the printing plant sold to a much larger company in the summer. The new owners closed a nearby plant in Elizabethtown following acquisition, moving the work from Elizabethtown to the Shepherdsville plant. This is has substantially increased the workload on plant staff.

As well, changes over the past two decades or so in the Postal Service has included the closure of several postal sorting centers, changing requirements for bulk mailing of items such as newspapers.

“Our subscribers in Pellville and Reynolds Station might expect their paper would be mailed from the Hawesville Post Office, but that is not what is happening,” Wimmer said. “For subscribers in those communities, the papers are actually dropped in Owensboro by our driver and then the Postal Service sends them to Fordsville for delivery on those rural routes. Any delay along the way could affect timely delivery.”

The four Post Offices papers are mailed from are Hawesville, Owensboro, Lewisport and Tell City, depending upon where the subscribers of the Clarion live.

“Another example would be a subscriber in Cloverport,” Wimmer said. “Those papers are taken to Owensboro, then delivered to Hardinsburg for route and PO Box delivery. Everything has to happen just right, and even then, there might be an issue with a full address not being printed on the label at the plant. Those papers are typically returned to our office, and then we label them and get them back into the mail system.”

“There is absolutely no reason it would take the post office more than a couple of days to deliver a newspaper locally,” Thompson said. “But delivery issues of a week or more is totally unacceptable and perhaps goes back to (DeJoy) stating a slowdown in mail was forthcoming. Unfortunately, subscribers believe the issue originates at the newspaper and they complain at length about late delivery or much delayed delivery and threaten to cancel the subscription.”

Thompson said there is little newspapers can do to solve the ongoing issues.

“Local residents need to direct their anger to the local post offices to see why they cannot get the paper delivered in a timely manner,” he said. “USPS continues raising rates for periodicals class mailings yet service suffers even with the additional income.”

Postal issues for newspaper delivery are not new in the industry, and the topic is one of constant discussion not only in Kentucky but nationally. The National Newspaper Association maintains the Max Heath Postal Institute, a clearinghouse which offers training programs to newspapers on the ever-changing postal environment.

Heath – considered industry-wide to be the foremost newspaper expert on the Postal Service – was an employee of the former owners of the Shepherdsville printing plant. He had served as executive editor for Landmark Community Newspapers and was chairman of the NNA Postal Committee for 30 years.

“As the Postal Service is pushing massive changes out to mail users, we face a daunting frontier without our leader,” NNA Foundation President Matt Adelman said following Heath’s death in July 2021. “He understood that the best newspaper imaginable has little value unless people are able to receive it. Max spent decades training us, fighting for us and leaping into the fray of postal policy.”

Clarion customers facing delivery issues should contact the office at 270-927-6945 or hancockclarion@gmail.com with any concerns.