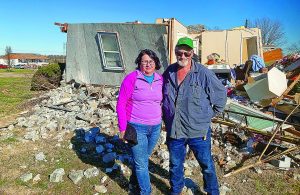 Belinda and Lee Hill stand at what remains of their home on Kentucky Highway 175, just west of Bremen in Muhlenberg County. Lee was home with his mother, Martha, at the time the tornado struck. Martha was in the bedroom just over Lee’s shoulder.

BREMEN – Lee Hill had been watching weather reports throughout the evening Friday at his home on Kentucky 175 South, about three miles west of Bremen in Muhlenberg County.

After watching reports from regional meteorologists and receiving multiple tornado warnings, Lee made several attempts to get his 83-year-old mother, Martha, to move with him to the basement of the home.

Martha refused to leave her bedroom at the corner of the house.

Lee said the final warning at around 11 p.m., stated a tornado was headed toward the northern Muhlenberg community.

“They said it was coming, but I knew it was already here,” Lee said. “I started down the hallway to get my mom, but it was too late to do anything.”

Lee braced his arms, knees and feet against the walls of the hallway, attempting to hang on the best he could, as the EF3 tornado struck the home he and wife Belinda had lived in for 36 years. Lee had built the home years before the couple married.

On this night, Belinda was in nearby Sacramento in McLean County, staying with her own elderly mother.

“Everything came down on top of me and I had to keep pushing myself back up to keep from being crushed,” he said. “They say it sounds like a train; well, it doesn’t. It sounds like there are two engines running full-on right beside your head.”

Once the storm passed, Lee forced his way through the debris in the hallway, and pushed open the door to Martha’s room. “She was standing just behind the door, looking right into my eyes,” he said.

“There’s nothing left standing of her bedroom,” Belinda said. “Amazingly, she only has a couple of black eyes and a few knots on her head.” Martha is currently “getting some needed rest” in Louisville with family.

Lee said the only thing left intact in his mother’s room was her lift chair. The roof and two exterior walls were gone, along with the entirety of the home’s garage and a large outbuilding shop.

“We had just finished remodeling the house,” Lee said. “But we survived.”

When asked how he and his mother survived the direct hit, he simply replied, “God.”

To the west of the Hill residence, four houses were completely destroyed and occupants were injured. A home across the highway had a portion of its roof ripped away.

But just next door to the east, once stood the Oglesby family home. It was here that a five-month infant, Chase Oglesby, was killed. The infant’s parents – Andrew and Charity – remain hospitalized.

“We’ve got it bad, but there are people who have it much worse,” Lee said. “We are hurting for the loss of the little baby, and so many others. We’ll do our best to go on and put things back together.”

At one point, a volunteer who had been working to clean up the Oglesby property came over to let Lee know, “We haven’t found the box yet.”

Lee told him to “forget about the box,” which he later explained contained cash he had been putting back.

“Someone might find that money a hundred miles away,” he said. “If they find it, they can have it. Maybe they need it more than I do.”

As the Clarion left the property, the Hills were immediately back to work right alongside the hundreds of volunteers throughout the community carrying on the grim and tough work which will extends for weeks to come.