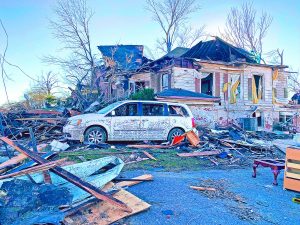 A destroyed home in Mayfield in Graves County. Mayfield’s downtown was devastated Friday evening around 9:29 p.m., when a suspected EF3 tornado struck. Twenty people died in the county according to the Coroner’s Office. (Photo by Amber Givens)

As the victims and communities affected by the Dec. 10-11 “Quad-State Tornado” begin to pick up the pieces of their lives and push forward with recovery, the stories of loss, survival and compassion will forever be etched into the minds of those impacted.

In the late-night hours of Friday, and extending into the early morning of Saturday, a strong storm system spawned at least four powerful tornadoes from northeast Arkansas, through the Missouri Bootheel and into northwest Tennessee, before spreading the worst of its destruction through west Kentucky.

Warnings of the potential for destructive storms had been well-publicized beginning Thursday and throughout the day Friday, though there was little indication citizens, journalists and meteorological scientists expected what occurred.

While the National Weather Service in Paducah is still assessing the intensity and track of the storms, one thing is clear: Billions of dollars of damage has taken place, dozens upon dozens of people have been killed, and the recovery is likely to take years.

The largest of the tornadic storms lay a pathway of destruction and death across small Kentucky towns like Mayfield, Princeton, Dawson Springs, Bremen and Hartford. Early estimates hold that the storm was at least an EF3, three-quarters of a mile wide, and stayed on the ground for at least 210 miles and perhaps as long as 250 miles.

There were more than 30 tornadoes reported as the cyclonic storms pushed east over the 24-hour period, with separate storms striking Bowling Green, Ky.; Edwardsville, Ill.; and Defiance, Mo.

At least 88 fatalities have been confirmed, with more than 74 in Kentucky alone. Once final accounting is completed, the injured are likely to number more than 1,000. More than 100 people were still reported missing throughout Kentucky on Wednesday, and the tornado may very well become the longest track in U.S. history, and the deadliest in Kentucky history.

The simple statement: These were storms of historical significance.

Mayfield, a town of 10,000, is the county seat of Graves County and was the first major population center in west Kentucky to be struck. The storm entered the community around 9:29 p.m., and as Doug Gloyd, a Mayfield resident and assistant principal of Muhlenberg South Middle School put it Saturday morning, “Downtown is destroyed; it’s bad.”

More than 100 workers were covering their night shift at Mayfield Consumer Products, trying to fill orders for scented candles ahead of the holidays, when the storm hit the factory head-on. The building collapsed onto them, trapping dozens inside.

As of Monday, eight employees at the factory were confirmed dead and six were still missing. The injured number into the dozens, and due to the injured being sent to several regional hospitals, company officials told The New York Times they were unsure of an exact count.

Among the dead at the factory was Deputy Robert Daniel, 47, of Graves County Jail. Daniel had been supervising seven inmates in a jail-to-work program; all inmates survived and assisted in the rescue efforts.

The Graves County Coroner’s Office said at least 20 people died in the storm.

Dawson Springs is a town of about 2,400 people in southwest Hopkins County. The town motto is “A Very Special Place.”

Former Kentucky Governor Steve Beshear grew up in Dawson Springs. His son, Governor Andy Beasher, toured the area Saturday and said while his grandparents’ home was spared, one block away “there is no house standing.”

Beshear confirmed, while in Dawson Springs, President Joe Biden had signed an emergency declaration for the affected areas of the state, speeding up the Federal Emergency Management Agency response for families and businesses.
President Biden was expected to visit Dawson Springs and Mayfield on Wednesday.

The governor also visited Mayfield and Bowling Green that day.

Bremen in Muhlenberg County is home to an elementary school, a water district office, and a bank branch – not much else dotted the landscape before the storm except family homes and farming operations.

As the storm arrived in the community around 11 p.m., residents were glued to local television weather reports and the ongoing tornado warnings pinging their mobile phones.

“We kept listening to the track and watching radar,” said Wayne Drake, a deacon at Bethlehem Missionary Baptist Church in Bremen. “The folks on TV said it was coming toward my house just a couple miles south of here and we got ready. The tornado missed our house, but as you can see, it has left its mark for a long time to come.”

The church – established in 1856 – took a direct hit and is likely a complete loss. Homes on the western edge of town were obliterated. 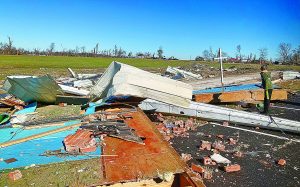 In the aftermath, 12 people in Bremen were left dead, dozens injured and an estimated 100-plus homes and farm buildings were either damaged or completely destroyed.

“I’ve lived here my entire life, and I have never seen anything like this,” Deputy Alex Piper of Muhlenberg County Sheriff’s Department told National Public Radio. “It’s a catastrophic event.”

Among the dead in Bremen was 43-year-old District Court Judge Brian Crick. Crick was at his home with his wife and two of his children when the tornado hit. Crick’s family survived with injuries.

The judge was known to be an advocate for the rights of defendants in his court, and had worked prior to taking the bench as a public defender. “He had a very common sense approach,” said Circuit Court Judge Brian Wiggins. “He was very level-headed about how to handle cases and how to talk to people.”

Chief Justice John Minton called Crick’s death “a shocking loss to his family, his community, and the court system.”

Also killed in the storm was five-month-old Chase Oglesby. The infant died as the family home was completely destroyed. The infant and mother were found hundreds of feet from the site of the home. The Oglesbys were severely injured and continue to recover in hospital. 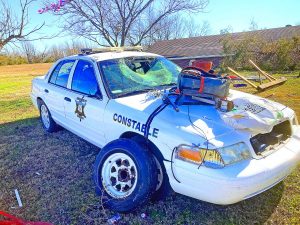 The cruiser of Muhlenberg County Constable Tim Franklin was damaged during the EF3 tornado Friday evening in Bremen. A large piece of plywood roofing was propelled through the windshield. A son’s home next door was destroyed.

At Bremen Elementary School, the community and Muhlenberg County Schools has established a relief center for affected families to pick up needed supplies.

Assistant Superintendent Matt Perkins said Monday the response from the community – and even those from outside Muhlenberg County – “had been tremendous.”

Perkins said trucks and trailers full of clothing, cleaning supplies, diapers, canned foods and hygiene items had been coming into the school from St. Louis, Nashville, Memphis, Evansville, Louisville and Lexington, as well as from families from all across the southeastern United States.

“Our hearts are as full as this gymnasium,” Perkins said. “The love our community is receiving in this tragic time cannot be quantified. We know Muhlenberg County is a great place, and to see others who know nothing of us to show the compassion and care they have is heartwarming. We’ve got a long road ahead, but I know we are not doing it alone.”

The gymnasium had the appearance of a superstore, filled with tens of thousands of items. Several volunteers were on hand, including groups of teenagers from the county’s middle and high schools.

Bremen’s school is just one of several intake centers in the county. Items remaining after area families are helped will be moved on to other affected communities, and distributed to food banks and family resource centers in the region, Perkins said. 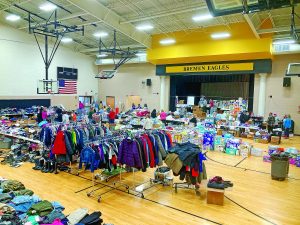 All across the region, fire departments from Indianapolis, Evansville, Owensboro, Nashville, Louisville, Lexington and many others have joined in the recovery effort.

More than 550 Kentucky Air and National Guard members, including a specialized urban rescue response team, have fanned out across west Kentucky, along with law enforcement and rescue units from dozens of jurisdictions.

Officials with assorted electrical and water utilities, along with broadband crews, are working nearly around-the-clock to restore essential services.

Teams from FEMA and the National Weather Service were expected to be fully in place by midweek.

Damage is expected to reach into the hundreds of billions of dollars.