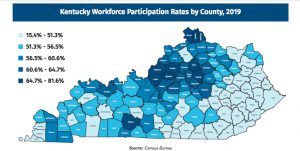 The Kentucky Chamber of Commerce has released an alarming report – “20 Years In The Making: Kentucky’s Workforce Crisis” – which outlines the decline of the workforce participation rate among the state’s working age men and women from 2000 to 2020.

The report opens with this introduction:

“Workforce has been a topic of concern for business leaders and policymakers for years now, but interest in the issue has surged in recent months. Driving this surge has been the collapse in employment that took place with the onset of the pandemic in Spring 2020 followed by the nationwide struggle to find workers to help rebuild the U.S. economy.

“In April 2020, 23 million Americans were unemployed and the national unemployment rate soared to 14.8 percent (16.9 percent in Kentucky). One year later, surveys of employers showed a record number of businesses struggling to find workers, while the U.S. saw an unprecedented 9.2 million job openings.”

The report goes on to say that even if Kentucky restores its workforce to pre-pandemic levels, the state will likely remain “far behind” the nation and surrounding states.

While Hancock County has one of the lowest unemployment rates in the state, its major employers face the same challenges as anywhere else in the state and nation.

The county’s economy has the distinction of having more workers commuting each day to local employers than employees who live in the county, which requires employers to cast a wide net.

Century Aluminum has added 80 positions in 2021 and had some difficulty filling these openings as it did take several months. Now that the plant is fully staffed, the employer continues to be challenged with retaining employees who want to stay in the smelting environment, according to Tamara Clark, Human Resources Manager.

“Century Aluminum can be a hot and dirty place to work, so getting new hires to stay when they have so many choices in the region can be tough,” she said. “Since we have taken our application process 100-percent online, getting applicants to apply has improved. Our big challenge is in filling the maintenance craft positions.”

Maintenance craft positions – such as mechanics and electricians – are in high demand in the industrial manufacturing field, and Century currently has several openings.

“We can find candidates with the training and education, but experience outside of school can be difficult,” Clark said. “The technical and maintenance fields are needed at companies all over the region.”

To address the issue in a long-term way, Century Aluminum works directly with Owensboro Community and Technical College and the school’s industrial maintenance program to bring in candidates for on-the-job training while they are still attending classes.

“This effort is a long-term strategy that we will have to continue to assist with filling our maintenance pipe-line,” Clark said. The company is currently seeking engineering and professional trades across varied fields in the Hawesville facility.

Application for positions can be made at centuryaluminum.com, under the “Careers” menu button.

The Hawesville facility employs around 585 people.

A Domtar representative said the company believes in partnerships with government, education and economic development officials to push the workforce and economy to better outcomes.

“Having a strong applicant pool and workforce is critically important to the on-going success of the Hawesville mill,” said Tammy Waters, manager of communications and government relations.

“The mill has been fortunate to secure qualified applicants for open positions, however the pandemic has shed new light on the shortage of qualified applicants. Domtar recognizes the workforce challenges with recruiting and hiring in today’s environment across the state and nation.”

“These partnerships are vitally important to the mill’s continued success as hiring challenges persist in both Hancock County and the Commonwealth of Kentucky,” Waters said. “Domtar also knows the value of partnering with local government and educational institutions to develop training programs to equip our local high school graduates with the basic tools necessary to make an immediate impact when they join the workforce. Both government and company funding can support these type initiatives.”

Southwire employs around 400 people at its Hawesville facility, and has experienced a higher turnover rate in 2021 than it did in the pre-pandemic year of 2019.

“We are certainly spending a bit more time on recruiting than we have historically,” said Scott Bell, Vice President of Talent Management. “However, we continue to attract high caliber talent to join Southwire. I believe that our 50-plus year presence in the area and legacy and stability of our brand – coupled with the connections our employees have made throughout this community – are real differentiators in attracting candidates.”

Bell said a major challenge for the company is recruiting talent in an environment where candidates have “access to many more career options than ever before, with evolving and customizable work options.” As well, the company has experienced long-tenured employees leaving the workforce earlier than expected, though it has created growth opportunities for internal staff.

“In some cases, tenured exits are outstripping the internal development pipeline,” Bell said. “It’s in those cases where the education/training gaps become most evident both in internal career progression ‘ceilings’ for current employees, as well as an absence of a ready source of external talent.”

The Chamber produced the report in conjunction with the Kentucky Community and Technical College System. The researchers said while there is often a strong focus on unemployment rates as an indicator of economic health, that perhaps a better indicator would be workforce participation rates.

Unemployment rates measure who is working and who is actively seeking a job. If a person ceases to seek gainful employment, they are no longer considered “unemployed” as they are not actively participating in the workforce.

More and more baby boomers are retiring in light of the pandemic, and Kentucky is among the unhealthiest and least active states in the nation. As well, the impact of opioid epidemic has been devastating to the state, leading to overdose deaths and high rates of incarceration among drug users.

Kentucky had a 4.5 percent “quit rate” – those workers willingly leaving a job – in August, the highest such rate in the nation. The national rate at the same time was 2.9 percent. Workers are finding themselves in a favorable market, with the leverage to negotiate for better pay, better benefits, and improved working conditions.

In October, the unemployment rate in Kentucky was 4.2 percent – and 3.6 percent in Hancock County – though 8.2 percent of jobs were open in the state in August, second only to Alaska. While the labor force in Kentucky currently stands at 1.99 million, about 1.5 million people of working age are not in the workforce for various reasons.

While the rates are above average for those 16 to 24, the rate begins to fall off significantly in those 45 years and older. And geographically, southeast Kentucky has the lowest workforce rate in the state, which is not surprising given the economic factors at play in the region. However, west Kentucky counties are not far behind. The highest participation rates can be found in central and north Kentucky.

Most job fields are expected to increase in demand in Kentucky through 2028, which is concerning for researchers in light of declining participation.

“Low levels of workforce participation are problematic on numerous economic and social levels. It holds back economic growth and productivity and discourages investment. It places strains on social safety nets and government finances. It makes it harder for employers to grow their businesses and meet the demands of their customers and clients. It harms social well-being and erodes the Commonwealth’s larger social fabric.”

One the most challenging aspects for Kentucky’s workforce is the skills gap needed for many of today’s manufacturing and professional positions. While 58 percent of the jobs in Kentucky require training beyond high school, only 49 percent of Kentuckians possess that post-secondary training.

“Data from the Southern Regional Education Board suggests that an acceleration in the adoption of automated technologies could serve to further depress the need for low-skill workers. They estimate that 29 percent of work activities will likely be automated by 2025, which will disproportionately affect workers with lower education and skill levels,” researchers said in the report.

Possible solutions for Kentucky’s issues presented by the researchers are:

The full report can be viewed at kychamber.com