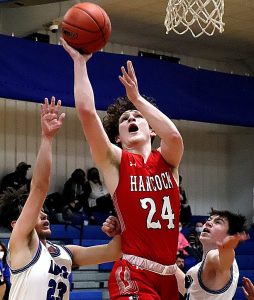 Devyn Powers scored 29 points and the Hornets recorded their first win of the season, an 81-71 victory over Frankfort at Campbellsville Saturday.

Devyn Powers scored 29 points and the Hornets recorded their first win of the season, an 81-71 victory over Frankfort at Campbellsville Saturday.

“We played extremely well against a very talented team,” HCHS coach Mike Orr said. Devyn got hot and Dalton Flake gave us a big lift defensively. He made some great decisions on the offensive end.”

Ryan Ogle was dominant offensively from the start as the junior put in seven first quarter points for HCHS. Powers began his run with five in the first and Kaleb Keown hit a basket to help give Hancock County a 14-9 edge. Powers, Keown and Dalton Flake all hit 3’s in the second period and the Hornets increased their lead to 37-31 at intermission.

Powers stayed hot in the second half, knocking down two more 3’s, but Frankfort played evenly with the Hornets throughout the frame.

The outcome was still in doubt heading to the fourth quarter, with Hancock County leading by just six points. The Hornets sealed the deal by connecting on 16 of 21 from the charity stripe over the final eight minutes.

“We’re playing for the end of the year and the process is to develop some depth. We’re slowly trying to get to where we can play seven or eight guys,” Orr said.

The Hornets won the first three quarters during a convincing, 79-46 win at Cloverport Tuesday.

“We didn’t shoot the ball well at all, but we played hard and we rebounded really well. We had three players with double-doubles and we did what we needed to do,” coach Orr said.

Ryan Ogle and Evan Ferry both hit from 3-point range in the opening frame and the Hornets led 23-10 after one. Devyn Powers splashed two 3’s and scored 10 points in the second period to lead HCHS to a 43-25 advantage at intermission.

Kaleb Keown got rolling offensively in the third and the Hornets out scored the Aces 24-8, which gave Hancock an insurmountable 67-33 lead. Cloverport won the final frame 13-12.

Powers had 24 points (three 3’s) to go with seven rebounds and five steals. Ogle had 22 points (two 3’s) and 10 boards, and Keown had 13 points and 12 rebounds. Ferry had 12 points, 10 assists, six boards and three steals, Dalton Flake had six points, four boards, two assists and two steals, Landyn Emmick had six boards and three blocks, Jordan Payne had two boards and one block, Luke Brown had a board and a steal, and Camden Lucas had a rebound.