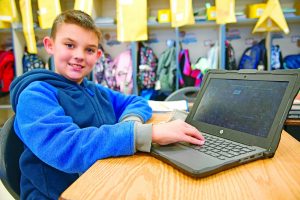 Noah Abbott, 10, a fourth-grader at North Hancock Elementary School will challenge teachers and staff to a Nitro Type challenge next week to raise funds for the school’s Family Resource and Youth Services Center.

Noah Abbott will put his typing skills toward a good cause next week as the North Hancock Elementary School fourth-grader will challenge teachers and staff at the school to typing races.

The “Noah’s Noel Nitro Challenge” will pit the 10-year-old against his challengers in Nitro Type – an online typing skills tool which simulates auto drag racing – in an effort to raise money for the NHES Family Resource and Youth Service Center.

Adults will challenge Noah, Dec. 13-16, by making a $5 donation to the FRYSC, with the Abbott family kicking in an extra dollar for each adult he defeats.

“I’m your typical nice guy,” he said. “I like to do things for others. My mom and I thought it would be cool to have a contest, and raise money against the teachers.”

Noah types about 65 words-per-minute, with a 90-percent accuracy, and uses his own “free finger” method. He said he is not as accurate when using the home row of keys, but has good muscle memory.

Noah said he wanted to raise money for the FRYSC, especially during the holidays, because, “They help families in need, and it’s important for families and children to have presents and things they need in life.”

Noah’s homeroom teacher, Andrea Kendall, said the student thinks of others in a special way.

“It’s so amazing that he is always thinking of others,” Kendall said. “He is looking forward to challenging the teachers – and beating them. Noah has a heart of gold, and we are so proud of him for taking the initiative to help his fellow students. He is a super-typist, so he’s probably going to blow all of us away.”

Noah’s interests outside of school include drawing sketches of video game characters, making his own books, and playing “American Truck Simulator,” which allows players to be a long-haul truck driver.

“When I get older, I want to be a truck driver,” he said. “I will probably buy an International or Kenworth truck.” His interest in trucking is evident in that one of his custom vehicles in Nitro Type is a semi-tractor.

“With my experience on typing and computers, I’m pretty sure I can win every time,” Noah said.

NHES Principal Kelly Moore said Noah has a drive to serve others.

“Noah is a conscientious, special student,” Moore said. “He loves to help others and this fundraiser demonstrates what type of person he is. We are very proud.”

Noah said he is thankful to Superintendent Robby Asberry for approving the fundraiser.

“If it had not been for the superintendent, it would not have become real,” he said.

Noah is the son of Tiffany and Joshua Abbott of Hawesville.