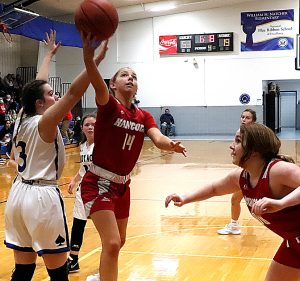 The Lady Hornets earned their first win of the season when they won 56-17 at Cannelton Monday.

The Lady Hornets earned their first win of the season when they won 56-17 at Cannelton Monday.

“It’s nice to get the first win after a tough first week,” HCHS coach Kevin Husk said. “The girls did great. We had good ball movement and played some solid defense, too.”

Hancock County took control early on by sinking five 3’s during the opening quarter. Bailey Poole splashed three from downtown while Lily Roberts and Emma Morris hit one each from beyond the arc. The Lady Hornets led 21-6 after one frame.

Kendall Hale hit a “3” for Cannelton during the second quarter, but the visitors won the frame 11-3 for a 32-9 halftime advantage.

There were 3’s galore again in the third for HCHS as three players connected. Poole sank two more and Roberts and Taylor Johnson also hit from 3-point land to help the Lady Hornets push the lead to 48-15. Hancock won the final quarter 8-2.

Hancock County shot 38.3% from the field while holding Cannelton to just 12.8% shooting. The Lady Hornets made 9 of 26 attempts from beyond the arc.

“We still have a lot to work on but we’re headed in the right direction,” the coach said.

Hale finished with 13 points to lead the Lady Bulldogs.

The varsity girls went on a 23-4 third quarter run during a 56-24 win at Cloverport Tuesday.

“The girls played well. I was proud of how we were able to execute. We’re taking steps in the right direction,” coach Husk said.

Emma Morris and Lily Roberts scored six points each in the first period and Hancock County led 15-5. Morris, Bailey Poole and Jadan Roberts all hit from beyond the arc in the second and the halftime score was 30-15.

The Lady Hornets sealed the victory by dominating the action in the third frame. Poole scored 11 points to lead the way and Hancock’s lead swelled to 53-19. The Lady Aces won the final quarter 5-3.

Bailey Hurst scored her 1,000th career point for Cloverport during the game. She finished with nine on the night. Emily Bennett led the Aces with 10 points.

Hancock County fought back to win the second half during a 46-40 loss to McLean County at HCHS Thursday.

This was a tough loss for us because we did not play well,” Kevin Husk said. “We played to the level of our competition, which happens when your team is so inexperienced. These girls know they can play better and I’m looking forward to seeing them do the simples really well moving forward.”

The Lady Cougars won the opening 6-5 in a defensive battle. The visitors found their range in the second quarter, splashing four 3’s enroute to a 24-13 halftime lead.

The Lady Hornets scratched and clawed their way back in the second half. Lily Roberts scored seven third quarter points and Bailey Poole had five. Both players hit 3-point field goals during the frame and HCHS won the period 11-8.

Emma Morris led the Lady Hornet offense in the fourth with a basket and perfect free throw shooting. Kendra Keown chipped in three points and the girls were gaining on their opponents when time expired. Hancock won the final frame 16-14.

Whitefield Academy never trailed during a 64-37 win over the Lady Hornets on Saturday at HCHS.

“We had moments where we played some solid basketball, but overall we’re still working on getting better at the little things. Our team is learning that rebounding as a team, pump fakes, jumpstops, giving max effort and talking on defense make us a really good team,” the coach said. “When we don’t have those fundamentals then we will struggle. I still like where this team is heading– they’re full of potential.”