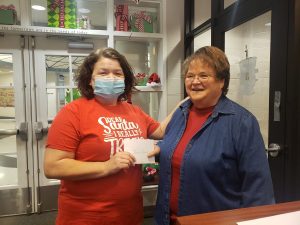 Jamita Beaver, right, met with Leigh Beatty, left, Monday morning at North Hancock Elementary School so Beatty could return a $100 bill Beaver had lost during the Lewisport Christmas Parade. The money was meant for Beaver’s church offering, and she was thankful to have it returned.

A Hawesville woman has a renewed faith in her community after losing a $100 bill at the Lewisport Christmas parade Saturday, only to have it returned Monday morning.

“I had put my offering money in my pocket to get change later,” said Jamita Beaver. “My granddaughter was in the parade, so I pulled out my phone to take a picture. Evidently, I pulled out the $100 bill.”

Beaver said she had been standing by Jailer Roger Estes and Sheriff Dale Bozarth, and called each of them to see if the money had been found. Later on, Estes called Beaver with some good news.

“A lady had called him to see if anyone had lost any money,” she said. “He asked if it was $100, and then told her he knew who it belonged to.”

Beaver was later contacted by Leigh Beatty, who arranged to meet her Monday morning at North Hancock Elementary School, where Beatty works as a teacher’s aide.

“It really gives you hope there are still good Christians and good people out there,” Beavers said.