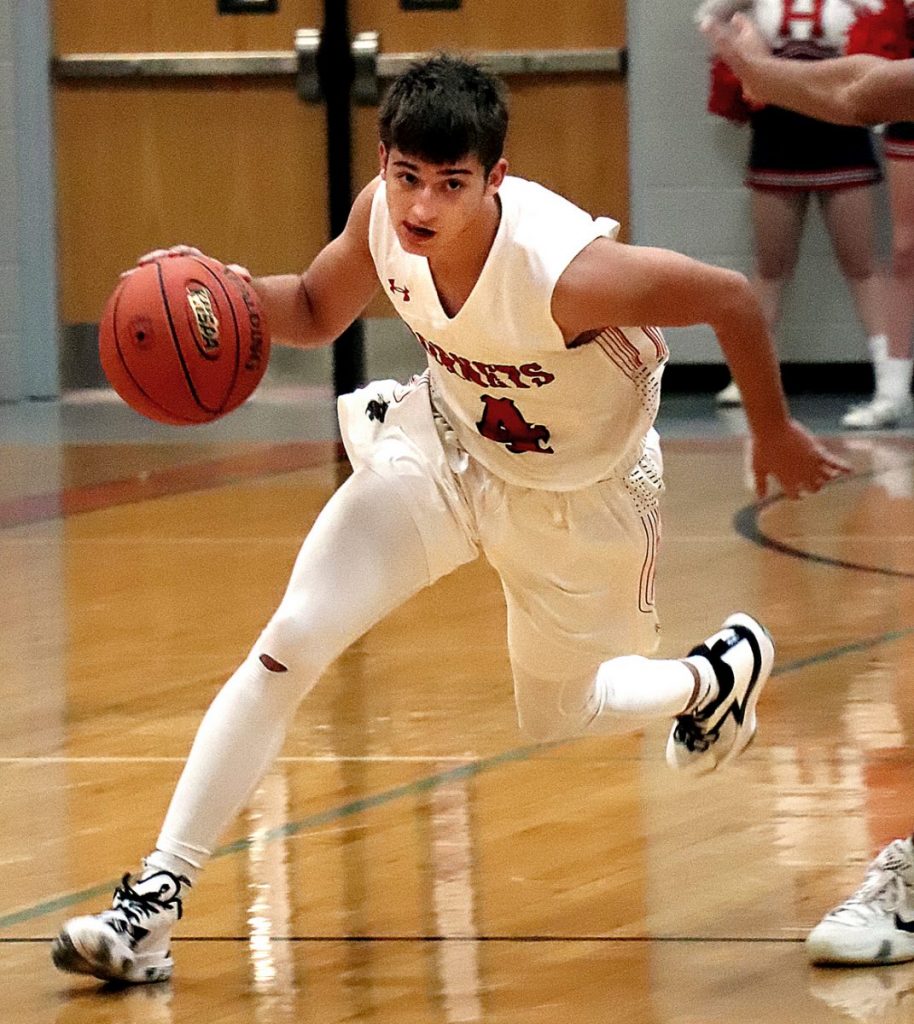 The Hornets opened the varsity season by going toe-to-toe against the top ranked team in the region here Tuesday. The Owensboro Red Devils’ defensive pressure and slashing offense allowed them to pull away for a 79-60 win over Hancock County.

“Owensboro is relentless with their pressure and we won’t play another team with their speed in our region,” HCHS coach Mike Orr said. “We knew what we were getting into when we scheduled them. I’d rather open up with one of the favorites and one of the best players in the region… we learned a lot because you can’t simulate that kind of speed during practice.”

Kaleb Keown scored the Hornets first points of the season when he buried a “3” from the corner early in the first period.
Jalen Rogers knocked down three shots from beyond the arc to put Owensboro in front, but Hancock County battled back with offense from Devyn Powers, Even Ferry, Landyn Emmick and Ryan Ogle.
The Hornets trailed 17-13 late in the first when Powers splashed a “3” and Keown hit 1 of 2 from the line to tie the score at the first horn.

OHS went on a 9-0 run to begin the second quarter until Emmick scored from an assist by Ferry. Ogle connected from downtown later in the frame but the Devils won the quarter and held a 36-27 lead at intermission.
“We were right there. We would make a good play and then turn the ball over or miss a shot that I see us make a lot,” Orr said.

Emmick blocked a shot at the rim on Owensboro’s first possession of the second half, but the Hornets quickly turned the ball over against the attacking defensive pressure of the Devils.

Amari Wales and Cayman Powell carried the offense for OHS while Ferry and Powers kept HCHS close. Powers scored on a conventional 3-point play and Ferry was 4 of 4 at the line during the period. When the dust settled the Hornets trailed 53-41 heading to the fourth.

Ferry was working his tail off as the point guard was under heavy full court pressure the entire game. The junior did a terrific job of limiting turnovers as he got the Hornets’ offense started.

Powers and Keown scored at the foul line and Powers buried another 3-pointer, but the Hornets could not match the Devils offense over the final eight minutes. OHS took the final frame 26-19 to win the season opener for both teams.
“I’m not disappointed. We had a lot of effort against an excellent basketball team,” Orr said. “Post season games aren’t won on November 30th and we’re going to get better.”

Hornets go on the road
If you didn’t come to see the Hornets play Tuesday you’ll have to travel a bit as the team goes on the road for a long stretch. The next home game is scheduled for Jan. 11.

Coach Orr talked about the schedule and his plans.  “The scheduled got messed up because of Covid and it doesn’t have the balance that it normally has. It just kind of fell that way this year. The All “A” is out of our control and we’re playing two Christmas tournaments on the road.

“I want this program to get notoriety, and not just in our region. But to get that you have to go into other regions and compete and get recognized. You want your guys to get all-state votes and your team to get Top-10 votes. To do that you have to travel out of your region. That’s what I did at Catholic and we were #4 in the state. “Hopefully our fans go with us and some of these road games aren’t too far away.”

The Hornets will have a stretch of eight home games during the second half of the season, and many of the early season away games will be at home next year.