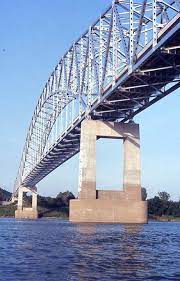 With the passage of the $1.2-trillion Infrastructure Improvement and Jobs Act on Nov. 5, the Commonwealth of Kentucky is poised to receive about $5 billion in funding for highway and bridge repair/replacement, public transportation, broadband expansion and electric vehicle charging facilities.

While it remains unclear exactly how those monies will be distributed throughout the Commonwealth, Hancock County Judge/Executive Johnny “Chic” Roberts said last week he is looking forward to working with state and federal officials to move the community forward.

“The funding really stands to transform not only Hancock County, but all of our rural counties,” Roberts said. “There are several things that could be done to improve our infrastructure in the county, but the broadband expansion, to me, holds the most promise to transform not only how we do business, but also open up new possibilities for each citizen.”

The Act contains funding for $65 billion in high-speed internet and broadband infrastructure, with Kentucky set to receive $100 million-plus. It was signed into law by President Joe Biden on Nov. 15.
About $154 billion of the total infrastructure package is grant funding, with $100 billion to be awarded by competitive process, with final approval lying with the U.S. Department of Transportation.

Those monies in the law which will go to already established formulaic programs will likely be among the first funding to reach state and local levels, according to statements by U.S. Secretary of Energy Jennifer Granholm.

“Hopefully within the next six months you’ll start to see some activity with respect to roads and those formula dollars, and then some of it will be longer term,” Granholm said in a recent regional press conference.

According to the White House, “infrastructure in Kentucky has suffered from a systematic lack of investment.” The American Society of Civil Engineers gave the state a C-minus on its most recent infrastructure report card.

Priorities on the Local Level

Kenergy, a not-for-profit electric utility which serves 14 west Kentucky counties (including Hancock County), has filed an application with the Kentucky Public Service Commission to construct a 7,200-mile broadband fiber network at a cost of $143 million.

The expansion would take place with Kenect, a subsidiary company of the electric utility, and its subcontractor, Conexon. Conexon works exclusively with rural electric co-ops on broadband projects.

The proposal was made possible following the passage of House Bill 320 in the General Assembly, a law which allows co-ops to construct a network as long as it does not jeopardize its primary mission of providing reliable electric services. As well, HB 382 directed the PSC to adopt new new pole attachment rules to ease the process for broadband expansion.

Previously, replacement costs for “red tag” poles – those poles identified to be out of compliance with quality control standards – were all on the electric utility which owned them. The costs can now be shared between the utility and broadband lessees.

According to the filing by Kenergy in September, “The fiber optic network Kenergy seeks to construct is designed with excess capacity to be leased to Kenergy’s affiliate, Kenect, Inc., thereby enabling Kenect to extend and enhance the availability of broadband service to unserved and underserved households and businesses in Kenergy’s service territory.”

Roberts believes a comprehensive expansion of broadband internet in Hancock County is vital for the economic and educational future of the community.

“Broadband access has grown from a ‘want’ to a ‘need’ in our society,” he said. “It’s how we consume, it’s how we educate ourselves, it’s how we conduct business, and it’s how we communicate for healthcare needs. If the PSC approves Kenergy’s filing, I believe these funds could help move it all along.”

School closures during the pandemic, as well as the growth of home-based business in the county, has demonstrated just how important quality, reliable internet access to the future growth of the community, Roberts said.

“It’s the water and electric of our time,” he said. “It’s a quality of life issue, and I really think it will help not only our economic development, but our housing development and marketing. Our rural areas of Kentucky have been left behind in this respect, and it’s time we put everyone on the same level and make Kentucky truly competitive in every way in our current national economy.”

Comcast and TDS are currently undertaking broadband expansion in the cities of Hawesville and Lewisport, respectively.

The funding for roads and bridges has the potential to make the greatest impact across Kentucky, especially in rural communities. The White House said commute times in the state have increased about 6.3 percent since 2011. This is important since nearly 80 percent of Kentucky’s 120 counties have fewer workers living in the county thano working in the county.

Hancock County has 21.8 percent more workers working in the county than living here, placing it among the top 28 employment destinations in the state.

In addition to the allocated funding for roads and bridges, Kentucky will also be able to compete for $12.5 billion in Bridge Investment Program funds for economically significant bridges and nearly $16 billion of national funding in the law is for projects delivering substantial economic benefits.

“Our state roads in Hancock County are vital to our economy, and they probably need as much work as any county road,” Roberts said. “Fiscal Court always gives back our flex funds to the state for blacktopping of the state roads. We’ve talked in the Judges’ Association about a hope to increase discretionary funding for county roads, with perhaps an increase to the bridge and culvert funding, which is an 80-20 match. We were successful in using that program for the Lee Henderson Bridge.”

Roberts said the vision is to replace culverts with box culverts, a concrete structure which will “last a lifetime versus replacing it every 25 years.” The judge/executive said increased funding could be impactful to the county for generations to come.

Another priority is the continued widening of U.S. Highway 60.

“So much of the truck traffic from our factories is on that highway,” he said. “At certain times of the day, that 7 a.m., 7 p.m., transition, we get to some dangerous levels of traffic on different parts of the highway.”

As well, a direct route for the Bob Cummings Lincoln Trail Bridge over the Ohio River into Hawesville remains on the radar not only locally, but within the Transportation Cabinet.

“It’s been in the study phase for a long time,” Roberts said. “Sometimes these Six-Year Highway Plans become a 26-year plan.”

The bridge was opened in 1966. The goal is to eliminate the sharp turn into Hawesville and make a direct connection to Highway 60.

Keirsten Jaggers, a public information officer with Kentucky Transportation Cabinet District 2 in Madisonville, said the Cabinet is awaiting further guidance on how funding will get down to the state and local levels.

“With regard to passage of the federal infrastructure bill, Kentucky and other states have lobbied for a long-term funding solution for transportation, and we welcome any increase in funding with the new legislation,” Jaggers said. “We now are awaiting guidance from the Federal Highway Administration as to how the new law will be administered, including instructions on new grant opportunities. So we cannot say – at this time – how the legislation may affect any specific project.”