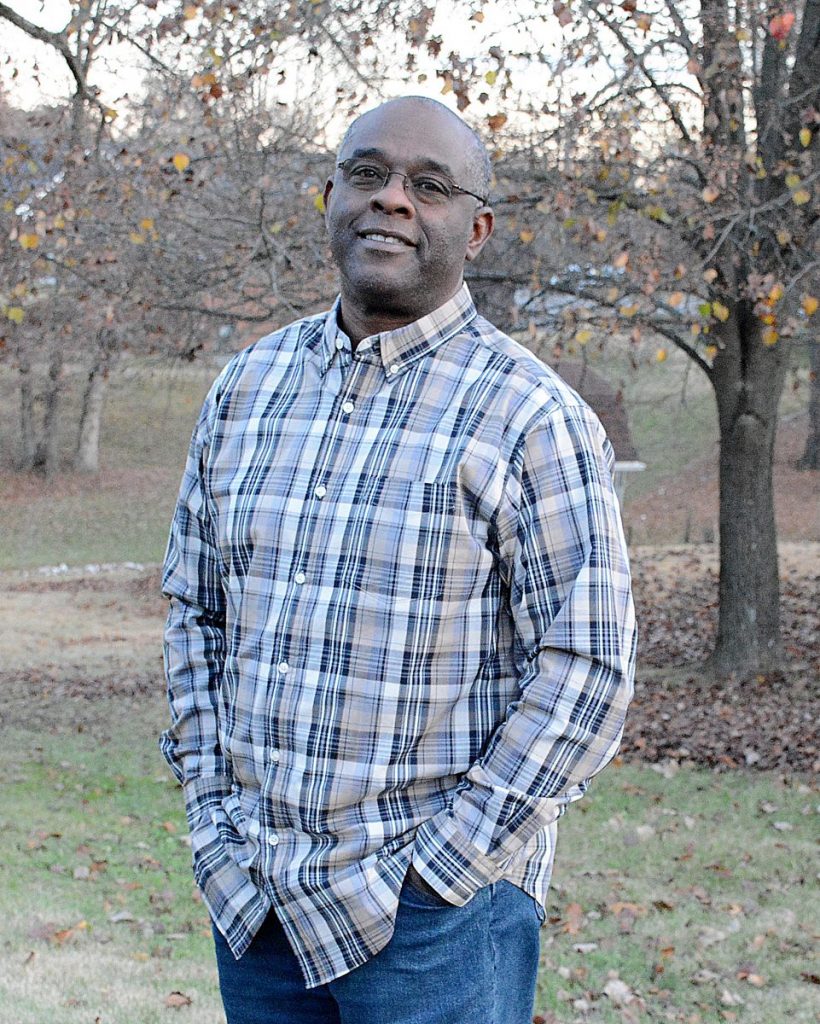 Tracy Johnson has served as Chairman of the Human Civil Rights Committee, through the U.S. Steel Workers Union at the Paper Mill, since 2008. He also served on the Kraftcor Federal Credit Union Board for 12 years, and was just recently appointed to the Hawesville City Council.

He grew up in Lewisport, and his family lived on Market Street. His three older brothers, Dennis, Ricky, and Gary, “paved the way,” he said. They taught him “what to do and what not to do.” Diane, Lisa, Jeff and Karen are his four younger siblings. “We had two wonderful, loving parents who were nurturing and raised 8 successful adult children,” he said. Their mother, Mabel, worked at Tell City Chair and their father, Edward, worked at Western Kentucky Gas in Owensboro.

He feels blessed, he said, to have grown up in a big family. “We had a lot of family support. And the big thing for me, was having cousins and siblings to hang with,” he said. He feels that big families are a “forgotten art” now, and stresses the importance of the “Unity of Family.”

A piece of wisdom that Tracy’s father shared with him, that he has taken everywhere in life is: “There’s a big world out there, and there are all kinds of people in it. And if you want to be successful, you’ve gotta learn to get along with all of them.” He said that shaped him more than anything; it taught him to get along with others, not to be selfish and to put others first.

His father’s mom and dad, were Nellie & Willie Johnson and when Tracy was growing up in Lewisport, he worked some on his grandmother’s farm in tobacco and helped other farmers get their crops in sometimes too. He worked for the City of Lewisport as a summer job, putting in sidewalks. And then, started working at P.J.’s Grocery after school and summers. His last three years of high school, he worked at Houchens. He also played 3 years of basketball for Hancock County High School and graduated in 1978.

He worked for NSA from ’79 until the layoff in 1982. In 1984, he went to work at the Paper Mill and has been there ever since. After working in different areas at the Mill, he completed a 4-year Apprenticeship Program in Mechanical Maintenance.

Tracy met his wife, Glenda, when they were both watching a basketball game between Hancock County and Breckinridge County, where she is from. They were married in 1984. “She’s been my rock,” he said. “She’s the engine that makes things go. I don’t know what I’d do without her. God blessed us, when he put us together.”

Tracy’s mother’s parents were from Hawesville, Willie Mae & Owen Mundy. And after he and Glenda married, they moved to Hawesville. Glenda is a Licensed Realtor and works at HCHS.
Glenda’s father, Tom Owens, loved old cars and he and Tracy worked on them together. Tracy started collecting in the late 80’s and has some gems, such as: a 1940 Chevy Coupe, a 1948 Chevy Sedan, a 1955 Chevy 1st Series Pickup Truck, a 1972 Chevy Pickup Truck, and a 1979 Ford Thunderbird.

He has done some mechanics and bodywork, but mainly loves the camaraderie of the people he meets at the car shows. Over the years, he and Glenda have traveled to car shows in Louisville, Florida, and Tennessee. Their favorite one to travel to is a Pre-1948 Car Show in Evansville.

He and Glenda, along with 2 other couples, organized the vintage car show at Vastwood Park. Cruise in the Park has been going for 8 years now and is on the 3rd Saturday of October. As many as 300 old cars, he said, will show up. Churches bring coffee and doughnuts and the Lions Club serves food. “It’s been well received in the surrounding area.”

Their son, Jeremy, has been bringing his food truck, J’s Good Grub, to Cruise in the Park for the last few years. “He has a great following and we are really proud of what he’s accomplished,” Tracy said.
Glenda and Tracy love to travel. They’ve been to Mexico, Aruba, and Hawaii, to name a few. One that is on his bucket list, is taking a train ride. “I’d like to take a train ride through the countryside in the Fall, when the leaves are off the trees and you can see everything,” he said.

They are both members of Hawesville Baptist Church. Tracy taught Sunday School for a number of years, is on the Board of Trustees, Pastor Search Committee, and helped a lot with the Youth Group, when their son was young. In the 90’s, he enjoyed helping with RIOT (Radical Impact On Teens). And, he helped coach the Youth Basketball Teams for around 7 years. He coached Little League, when his son was playing, as well.

Their son Jeremy and his wife Antoinette live in Owensboro and have blessed Glenda and Tracy with 4 grandchildren: Angel, Chuck, Jaylin and Jaden.