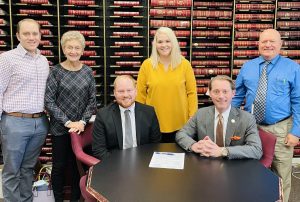 Boling is currently serving as Assistant Hancock County Attorney, and is in private practice at Madden & Madden in Hawesville. He has served in both capacities since 2018.

He earned his Juris Doctor from the Louis D. Brandeis School of Law at the University of Louisville in 2017, and his bachelor’s in political science from UofL in 2013. He is a 2009 graduate of Hancock County High School.

“A judge has an opportunity to make a difference in a person’s life,” Boling said. “It’s an extension of what I’ve already seen as a prosecutor, and in private practice.”

While Boling is committed to the justice system, he said each case is unique and might require a different approach, based upon circumstances.

“Ninety percent of what comes into District Court is drug-related in some way,” he said. “Our goal is to get people to treatment who need it; if we are not addressing the underlying problem, all roads will lead back to drugs.”

The attorney said he desires to work to correct the issues in people’s lives.

“Addressing the problems can be as effective as punishing someone for what they did,” Boling said. “Without the help they need, they will be right back (into the system).”

Boling’s experience in private practice has been in civil litigation, estate planning, family law and adoptions, and some personal injury. As an assistant county attorney, he has experience in DUI, traffic, drug possession, property crimes, juvenile matters, and probate cases.

“My private practice and prosecution experience has given me experience in most everything that will come before District Court,” he said. “Not everyone needs the strict judge, but some people do. Some need a judge who is compassionate and understanding to help them back on the right path. I think I have the temperament needed to be fluid and flexible on the bench.”

Boling said the position of district judge appeals to him in that he can make a difference in the community and serve his neighbors. He comes from a family with a strong background of public service – father Michael Boling is currently the Circuit Court Clerk, while late grandfather Danny Boling was the longtime judge/executive. Other family members have served in the education field.

Boling said he is committed to keeping two district judges in Hancock County, and is opposed to moving the Division 2 district judge to Daviess County, as has been proposed in the General Assembly.

“I want Hancock County to have a voice in that discussion,” he said. “When it was first proposed, no one asked our opinion about it. Our county needs to be represented; I do not believe the district can be adequately covered with just one district judge.”

Boling said while he understands Daviess County needs another Family Court judge, “I don’t want us to be a vessel to fix Daviess County’s problems.”

Boling is married to wife Chelsea, and the couple has two children – Easton, 2, and Dani, six months. The family resides in Hawesville.