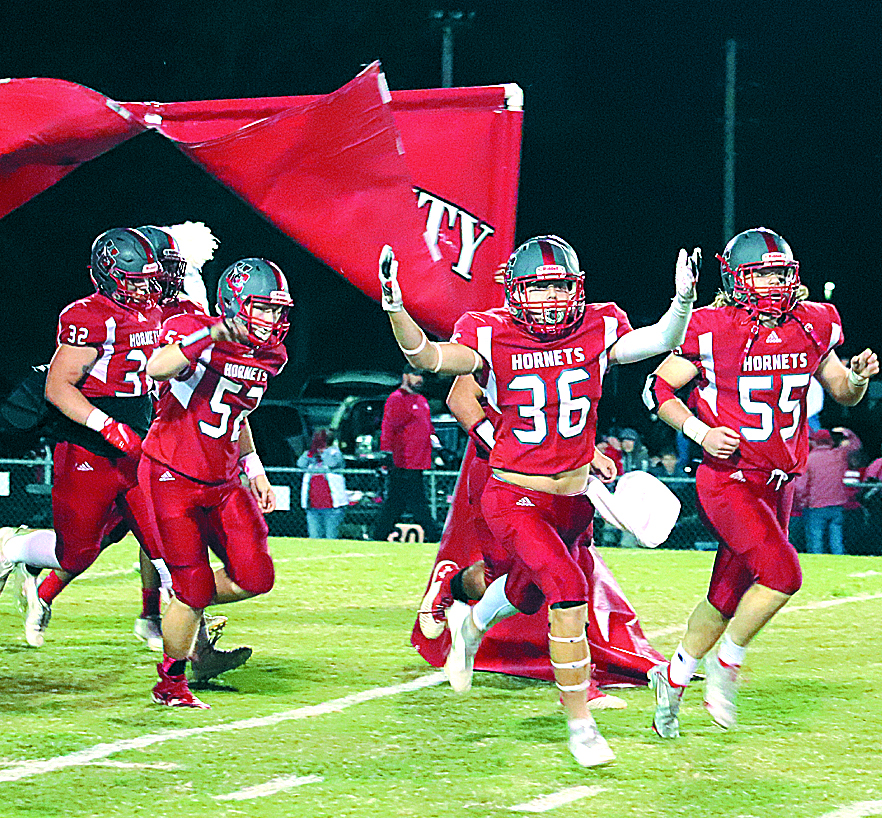 The Hornets saw a 14-0 lead disappear when Todd County Central came from behind to win 20-14 here last Friday. With the win, the Rebels earned the #2 seed and home field advantage for the opening round of the district playoffs on Nov. 4. Hancock County will travel to Elkton for the rematch.
“We turned the ball over four times and that’s hard to come back from,” HCHS coach Bobby Eubanks said. “But we were still in the game in the fourth quarter.”

The Hornets received the kickoff to begin the game and the offense looked sharp. Drew Lyday was at quarterback and the team worked the ball across midfield on runs by Logan Willis and Noah Mize.
Lyday connected with Kaleb Keown on a nice gain through the air and later Willis made a catch inside the Rebels’ 30 yard line. The Hornets faced a fourth–and–two at the 28 and Willis easily picked up the first down. On the next play Lyday hit Austin Volocko on a crossing pattern and the junior took the ball to the five yard line. Willis later scored on a 1-yard plunge to give the Hornets a 6-0 lead halfway through the first quarter.

Jake Frames made a tackle behind the line of scrimmage on the Rebels first offensive play and the Hancock defense did the job, forcing a three–and–out.
The Hornets started their next drive on their own 22 yard line and Lyday twice ran for a first down before the quarter ended.

Willis gained some hard yardage up the middle and Lyday had another nice run to the Rebels’ 23 yard line. Lyday then threw from the pocket and Keown beat his man at the goal line and hauled in the touchdown pass. It was Lyday to Keown on the conversion and the score was 14-0 with 10 minutes remaining in the half.

The Rebels went to the air for a completion that carried into Hornets territory. They completed another pass, but Colin Johnson made the stop and forced a fumble. Keown was there for the recovery and the home offense was back in business.

The Hornets took over at their own 34 yard line and Willis carried across midfield on a screen pass from Lyday. The Hornets turned the ball over on the next play when Mize was unable to handle a high pitch and the Rebels recovered at their own 43 yard line.

JT Richards made a big stop to force a third–and–11, but Gavyn Nolan completed a pass to Nate Reding for a first down inside Hornet territory with the clock running. Nolan later threw across the field, but Volocko went up high to intercept the pass attempt.

The Hornets took over at their seven yard line with 30 seconds remaining in the half. Willis got the call on a running play over right tackle, but the ball was jarred loose and Omarion Riddick picked up the ball and jogged into the end zone for a TD. The extra point try was blocked, leaving Hancock County ahead 14-6 at intermission.

Todd County received to begin the second half and Landyn Emmick stopped the runner cold at the 30 yard line.
The Rebels went to the air right off and Reding caught a 24-yard pass down the sideline. Riddick carried for good yardage then Nolan threw to the corner of the end zone and Preston Moore made the catch for a 16-yard TD. The Hornet defense stopped the conversion play to preserve a 14-12 lead for the home team.

After a series of punts the Rebels took possession at their own 47 yard line early in the fourth quarter. A 22-yard run by Riddick put Todd County in great position, but a series of penalties pushed them back and they were later forced to kick the ball away.

The Hornets were in business, starting at the 20 yard line with the lead. They picked up a first down and Willis was driving when the ball slipped out and was recovered by the Rebels.
Riddick had another big run, with a face mask penalty added on, and suddenly the visitors were knocking on the door at the 14 yard line. Three plays later it was Nolan to Reding for the go-ahead TD. Riddick scored the 2-point conversion and the Rebels led 20-14 with 5:16 on the clock.

The Hornets had their backs against the wall and they stepped up. Lyday threw deep down the sideline and Keown made a great catch for a first down inside the 40 yard line of the Rebels. A few plays later Lyday went to Keown again, but this time Reding jumped in front and picked off the pass.
“That interception wasn’t on him. It was a hustle play and he was trying to make something happen,” Eubanks said. The Rebels were able to run out the clock behind the slick running of Riddick to earn the win and home field advantage in the playoffs.

The Hornets will play the final regular season game at Louisville Holy Cross Friday then go on the road at Todd County for the rematch.

The stats
Lyday completed 10 of 13 pass attempts for 115 yards with one TD and one INT.
Keown made six receptions for 86 yards, Willis caught two for 15 yards and Volocko two for 14 yards.
Willis gained 71 yards on 17 carries, Lyday ran nine times for 48 yards, Aiden Weatherholt had one carry for six yards and Mize ran four times for six yards.

Weatherholt led in tackles with 11, plus one sack, and Jack Duncan had nine stops. Emmick made eight tackles, Christian Richards seven, Johnson six, Alex Basham had four and one sack, Mize made four tackles, Volocko and JT Richards three each, Braydon Wathen two, and Frames (TFL), Lyday, Keown and Aaron Garrett all had one each.