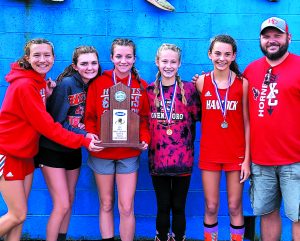 The HCHS girls cross country team placed runner-up during the Region 2 meet at Greenville Saturday.
“Every girl (from Hancock) ran their season or career best at the regional meet. They’re all peaking at exactly the right time,” Hancock coach Wes Meserve said.
The race was a battle between Hancock’s 8th grader Izzy Ross and Metcalfe County’s sophomore Anna Grace Blythe.
“They ran away from the rest of the field. Izzy didn’t lose contact until about a half mile to go,” Meserve said.
Blythe pulled away to win in a time of 20:13 on the 5K course. Ross was second in 20:30.
“Izzy ran 59 seconds faster than she’s ran all season and now the eighth fastest girl in school history. That’s a pretty significant accomplishment considering how many of the girls in front of her were state champions and All-Americans. She’s currently ranked ninth in the state.”

“Aly also ran one of her strongest races ever at regional. I’ve been so proud of the leadership and example she’s modeled for our young team. I couldn’t have asked more of her.
“Lauren is such a hard working athlete and we almost didn’t have her for the meet because she had the band regional Saturday, as well. We are very fortunate that Mr. Buskill (band director) has been willing to work with us. Lauren was able to qualify for state in both XC and band.

“Juliana and Lauren really proved the fact that every runner counts. Juliana had her best race of the season a the right time.”  Edmonson County won the regional team title with 50 points. Hancock County was runner-up with 64 points, followed by Bethlehem, Green County, Metcalfe County, Owensboro Catholic and Fort Knox.

The Hancock County boys varsity team placed sixth out of eight teams competing.
“It was a tough race for the boys,” Meserve said. “I believe we were capable of qualifying for state, but we just didn’t have the races we need to make the top five.”

“Hunter ran within a couple seconds of his best time ever. This is a good way for Nolan to end his high school career (at state) and will be a great experience for Hunter.
“Noah, Griffin and Max all ran their best times ever. Noah really showed his true potential in this meet. He started late and lacked confidence for much of the season. He ran almost three minutes faster then he’s ever ran before. Max was about a minute and a half faster than he had previously ran and Griffin was about 20 seconds faster.

“Inexperience was one of our biggest challenges this year. I think the boys will be much more prepared next season and I know they’ll be more mature.”
Isaac Riggs of Bethlehem won in 16:42.