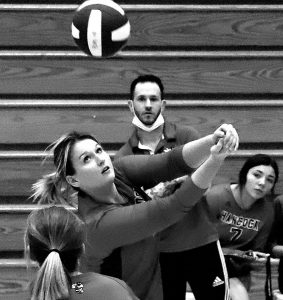 The HCHS Lady Hornets volleyball team saw their season come to an end on Monday when they fell to Meade County in the 11th District tournament held at Breckinridge County High School won by set scores of 25-11, 25-8 and 25-12.

“Meade County came to play and that’s what it boils down to, but our girls never gave up,” HCHS coach Blake Hardison said.

Sydney Kennedy had seven kills, one block and 12 digs for Hancock County while Karessa Ballard had six kills and 12 digs. Ashlynn Madden had six blocks, Emma Hurst had one kill, 17 assists and seven digs, Lauren Kellems had two kills and four blocks, Broke Toler had one assist and 14 digs, Kennedy Desper had two kills, two blocks and one dig, Sophia Reed had seven digs and Lily Lindauer had one dig. Sydney Kennedy and Emma Hurst were named to the all-tournament team.

“The season didn’t go the way we thought it was going to, but my girls fought every single moment they were on the floor, whether it be at practice or a game,” coach Hardison said.
“I hope to still be (coaching) at Hancock next year, and I want to build this program,” Hardison said. “A lot of our varsity will be seniors next year and I think that will help. The freshman team is very solid and the JV team is coming along.”

The HCHS freshman team fell in two sets. They were led by Emma Fulkerson, Lily Lindauer, Addy McCaslin and Savannah Gilliland.
“The JV and freshmen have made tremendous progress this season and we look forward to getting back to it next year,” coach Hardison said.