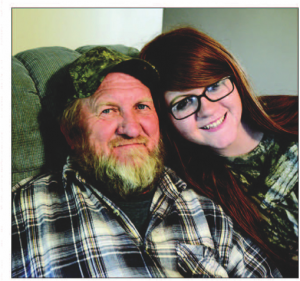 A severe traffic accident Thursday afternoon, October 14, sent three members of the Duncan family to the hospital. All three needed to be flown by air ambulance to the University of Louisville Hospital for the treatment of their injuries. Joann Duncan, husband Charles Duncan and granddaughter Brooklyn Conkright all suffered extremely serious injuries in the accident.

According to family members, Charles “Chucky” Duncan suffered a severely fractured ankle in the accident, granddaughter Brooklyn suffered a crushed pelvis and double fractures in a leg, and Joann suffered severe leg, shoulder and back injuries.

“Joann is not doing real well,” a family member said.
In addition to suffering the lower extremity injuries, Brooklyn also suffered a broken nose and lacerations to the face. “She is young and she is tough,” the family member said.

According to Hancock County Sheriff’s Deputy BJ Burton, Charles Duncan was headed westbound on U.S. 60 just west of the intersection with state Route 69 and U.S. 60 in his 2006 Chevrolet Silverado pickup truck when another vehicle struck him from behind.
“A passerby said Duncan was driving at around 45 to 50 MPH,” Burton said. “He was a little under the speed limit.”

Deputy Burton said the driver of the other vehicle, Tonya Godsey of Irvington, KY, said she was driving at around 55 to 60 MPH and came upon Duncan faster than expected. Burton said Godsey told him when she went to apply the brakes, they did not respond quickly. Burton said Godsey said she tried to pull around Duncan’s truck to avoid hitting it, but it was too late and she slammed into the back of the vehicle.
“When he got rear ended that is when it pushed him off the roadway and they struck the tree head-on,” Burton said. “The tree was maybe 15 feet off the road. It wasn’t that far.” 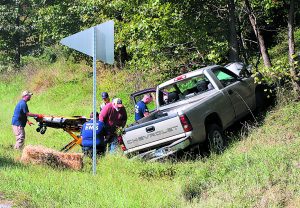 Charles Duncan suffered a serious ankle injury in the accident. “He was pushing on the brake trying to stop his vehicle and was pushed into a tree,” the family member said.

The family member says Charles is on crutches at the moment, but cannot put weight on his broken ankle. Of the three, he is expected to be released from the hospital first.
Deputy Burton said several different factors caused the accident. He said inattention, defective brakes and glare from the sun all factored into the accident.

Charles’ son, Todd Duncan, did not want to make extensive comments on the accident.
“I will say they were in a wreck, suffered extensive injuries and need a lot of prayers,” Todd said.

Duncan’s accident was the second of three serious accidents in four days in Hancock County last week. The first accident happened last Tuesday when Owensboro resident Christopher Sidener suffered a medical emergency while driving north on Main Street in Hawesville.  According to Hawesville Police Chief Mark Powers, Sidener later told him that the medical emergency suddenly came upon him and he tried to pull his vehicle off of the road, but succumbed to the medical issue before being able to get off of the roadway. His vehicle went through the outside side wall of the Hawesville Fire Station. Sidener suffered several serious injuries in the accident.

On Friday morning a van headed north on state Route 69, at Horsley Hill, went off of the road and rolled over. The driver, Jennifer Cronin of Indiana, suffered minor injuries in the accident. Hancock County EMS responded to the scene and treated Cronin. Hancock County Sheriff’s Deputy BJ Burton also investigated this accident.
“She was going northbound and she swerved to miss a deer that had entered the roadway. When she did, she dropped the vehicle off the right side of the highway,” Burton said. “She over-corrected, ended up barrel rolling the van and came to a stop at the bottom of Faye Horsley’s old driveway.”
Burton said when the deer darted onto the roadway from the right, Cronin swerved to the right in an effort to go around the animal. When she did her wheel dropped off the road and caused her to lose control.