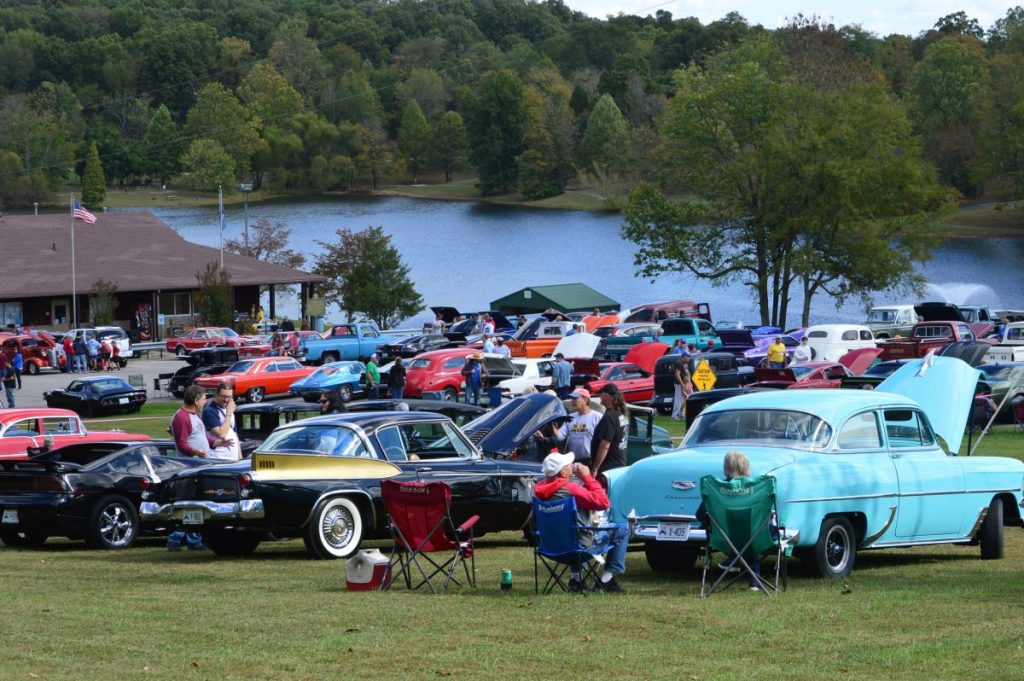 After a one-year break due to the Coronavirus, the annual Vastwood classic car cruise-in returned Saturday. Over the course of the day around 150 cars attended the show. The show officially started at 10 a.m., but most of the cars arrived early. By 9:45 a.m., 15 minutes before the start of the show, organizers started to line up cars in the grass field across the road from the beach house parking lot due to it being filled to capacity.

“The real beauty of is we get to show off Hancock County,” Tracy Johnson, one of the organizers, said. “People love this park, it is amazing; it is one of Hancock County’s gems, and we are glad we get the chance to showcase it.”

Johnson said organizers chose this particular date for the car show because it typically is the last best weekend of the year. Saturday proved to be such a day with warm temperatures and sunny weather.

Each year the car show boasts a varied line-up of vehicles; some date from the 1920s, while others are sparkling new high-performance vehicles.

One of the more unique vehicles at this year’s car show was a 1925 Model T racing car brought to the car show by Aaron Hess, from New Albany, Ind. 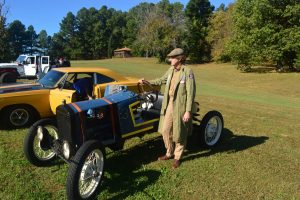 “It goes about 40 MPH,” Hess said.  He said it might run faster, but 40 MPH is the fastest he drove the vehicle. Hess did not drive the vehicle down to the car show, but put it on a trailer and hauled it down. He said the car contains a two-speed planetary transmission. While complex, he said it would take him less than 10-minutes to train someone how to drive the car.

Hess purchased the car about four years ago, and made minor repairs and restorations to the vehicle. This year he built a wooden steering wheel for the car. This winter he plans to add a windshield to the vehicle.
On Saturday he showcased the vehicle while dressed in period riding costume. He said people often gathered at dirt racetracks at county fairgrounds and raced the vehicles.

In addition the racers also tried to find wooden racetracks used for bicycle races. The bicycles raced first on the tracks, and afterwards the cars raced.
“This would be the premier race,” Hess said.

Other vintage vehicles included a 1941 Chevrolet car brought to the show by Hancock County’s Sue and Terry Hargis. 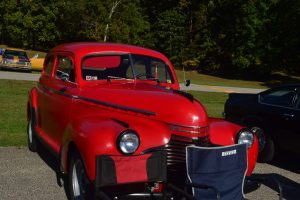 The car actually belonged to Sue’s Father, and he restored it and gave it to her. She said her father and Wayne Sturgeon, who started the Bristow, Ind. car show, built the car together.
“We just got it on the road again,” Sue said. “This is our third trip since last Friday.”

Sue said the car sat in a building for a short while. Her husband Terry said when the car was rebuilt a more modern Chevrolet engine, automatic transmission and power brakes were retrofitted to the vehicle.
“We just upgraded the car to power disc brakes,” Terry said.

Another vintage car to attend the show Saturday was a 1972 Corvette owned by Faye Stinnett of Lewisport. Stinnett purchased the car new in 1972, but a few years later the vehicle changed hands. 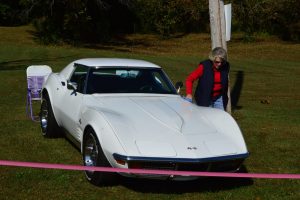 “It sat in a building for 25 years without being started or driven,” Stinnett said.  About 10 years ago her brother Steve Burden purchased the car from an estate sale and restored the vehicle. It took him about two years to completely restore the car. Shortly thereafter, deciding he owned too many cars, he sold the vehicle back to Faye.

“I am the original owner, but I did not own it all these years,” Faye said.
Faye said the car still has its original paint on it, and the engine has not been rebuilt. The car has only 78,000 miles on it.
“She is a good old girl!” Faye said. 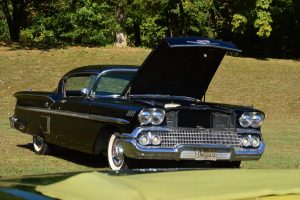 “It is identical to the first car I ever had,” Sonny said. “When I turned 40 I hit my second childhood and went and found this one.”
Sonny purchased the car in 1984. Sonny said he learned of the car while attending another car show, and tracked down the owner, only to find the gentleman just sold the vehicle. Sonny said he tracked down the new owner and made an offer on the car, and the new owner agreed to sell the vehicle.
“It has a 348 engine in it where my other one had a smaller block engine in it,” Sonny said.

Sonny said he took it to Regal Motorsports in Lewisport and told them he wanted them to restore it to new car condition. Due to its age, the car had numerous leaks of various fluids. He just got the car out of the shop a few weeks ago.
“I told then I wanted to be able to get in the car and drive it anywhere just like a new car,” Sonny said. “That is what they did.”
The repairs included rebuilding the engine, adding a new carburetor and work on the engine compartment. Saturday was the first time he drove the vehicle since having the work performed. 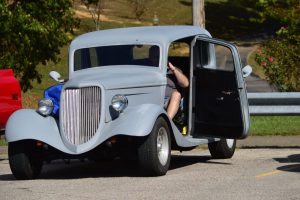 Apling said he tries to make several shows each year with the car. He purchased the car about 15 years ago, and it took him about three years to fully assemble the car.
“It has a Chevrolet engine,” Apling said. “The front end suspension is from a Mustang II. It is a combination of a Ford and a Chevrolet.”
Apling said he likes to cruise around in the car because it is a fun vehicle to drive.

Jerry and Brenda Conder, from Pleasant Ridge, KY. brought a 1967 Dodge Coronet to the car show. They purchased the car in 1999. 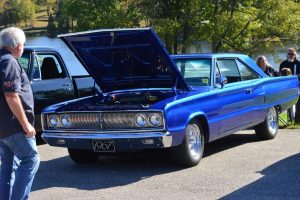 “It was a basket case when I bought it,” Jerry said. “All I got was a body; it was just a shell. It did not have any windows, wiring harness or nothing in it.” Jerry said someone purchased it from an estate sale with the intention of rebuilding it, but did not. That person sold it to another person that planned to restore it, but they did not either. The car changed hands several more times before Jerry bought it in 1999.
“Everybody that bought it was going to fix it up, took stuff off of it, and forgot to put it back on,” Jerry said. “It took a little over a year to find all of the parts to put it back together.”

When he purchased the car, finding parts was hard because few reproduction parts existed. He and wife Brenda visited many junkyards in an effort to locate the parts then needed. Once they found the parts it took about one year to restore the car. When he finished the car Jerry did not paint it at first. For the first touring season he drove the car around with just primer on it. In 2000 they decided to paint the car.

“It is still wearing the original paint we put on it in 2000,” Jerry said.
At the time their children were little, and they went to car show with them. So, they wanted a bigger car with more room when looking for a car to show. With the car finished, they hit the car cruise-in circuit.
“We used to do two or three car shows a weekend,” Jerry said. “We have done two shows and a cruise-in in one day before. We used to run the wheels off of it.”

Jerry said the car rides and drives like a dream. He and wife Brenda still enjoy getting the car out and driving it around and going to shows. Now though, their son Blake sometimes accompanies them to shows with his own vehicle. At Saturday’s Vastwood cruise-in Blake brought a black 1976 Dodge D-100 pickup he restored to the show. He parked it by his father’s Dodge Coronet.