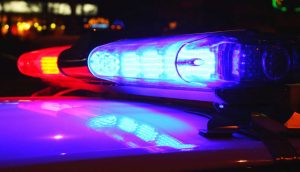 According to the report, Savannah K. Dewitt of Bowling Green, KY was headed north on the road in a Subaru when the vehicle dropped off the road. She over-corrected the vehicle, struck a mailbox and a tree. Her vehicle also overturned in the process. The tree fell and hit a vehicle parked at 7170 Little Tar Springs Road.

The report says Dewitt’s vehicle lacked a license plate and insurance at the time of the accident. Burton issued a citation referencing the wreck.
The vehicle sustained very severe damage. A wrecker from Bob’s Garage towed the vehicle.

Courtney Martin, of Lewisport, was traveling north on Adair Road in a 2014 GMC Yukon when she encountered a southbound Ford F-250 pickup truck driven by Cameron Cole of Louisa, KY. The pickup truck had extended tow mirrors and as the vehicles passed the truck’s extended mirror was over the road’s center-line and struck the Yukon’s mirror.

The driver of the truck, Cole, said he thought both vehicles were near the center-line and that caused the mirrors to hit. Both vehicles sustained minor damage. Neither vehicle required a tow.