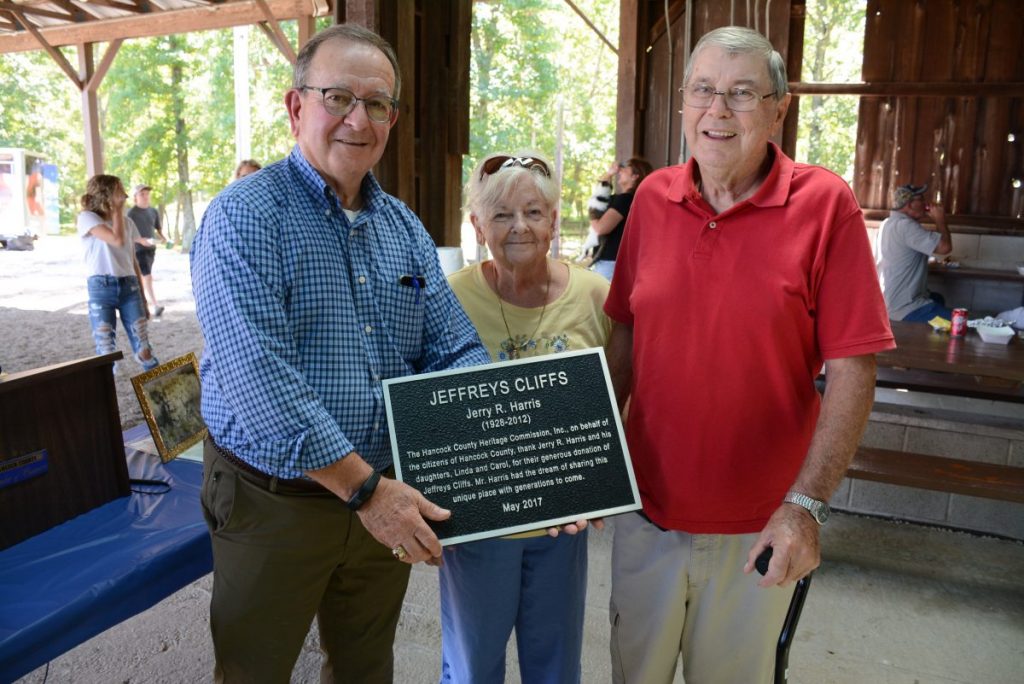 The Plaque Unveiling, in honor of the Harris Family, who donated Jeffreys Cliffs to Hancock County, was held on Labor Day at the Domtar Picnic Area.

Wally Harris, Jerry Harris’s younger brother was able to attend and speak, as well as Steve Canepari, who formed the Heritage Commission and with the help of many volunteers, has led the project of acquiring the Henning Farm, as well as building the trails and stairs leading up to the Cliffs.

Jerry Harris had began buying property in Hancock County, mostly areas that were adjacent to his childhood farm. When he acquired Jeffreys Cliffs, he received historical status for them and never restricted access to them. He left his home in Alaska and returned to live in KY full time, after retiring.

He asked his daughters to donate the Cliffs to the county. And when he passed in 2012, his daughters honored his wishes.    Jerry’s daughters and grandchildren are currently living in Alaska and weren’t able to be here for the event. They send “a heartfelt thank you for making the park a reality for all to enjoy.”

Judge Executive/Chic Roberts also spoke at the event. “Today we had the Plaque Unveiling for the Harris Family, who started this whole process when they donated the Cliffs. It’s such a generous donation and it is going to be so impactful for our community. Like I said today, I think that the unique aspect of this donation, is that it will touch so many generations. In my mind, it is a legacy type donation. There are two different parts of this: one is the economic aspect of it. When people visit Jeffreys Cliffs, they stop at our businesses, buy gas, buy food, etc. The second, most important part, is the personal aspect of it. Families can come to the Cliffs, take photos with their children and ten years later, they meet there again and take those photos again. You drive by and see school buses in the parking lot. It’s going to touch so many people. We are so grateful. It is a blessing for Hancock County to have received this donation”

“On behalf of Hancock County, we are so grateful to have received this donation, that started this whole process,” he said.    There are so many people who volunteered their time in order to make the dream a reality. Judge Roberts added, “It is impossible to name them all. Steve Canepari carried the torch and formed the Heritage Commission, to get this from start to finish.

None of that was possible without the Harris donation of the Cliffs.

“We couldn’t be more thankful for that donation and the impact it’s going to have on our community,” said Canepari.  “This was a process, once they had the Cliffs, there was other property, like the Henning Farm, that had to be acquired. The Heritage Commission went through the process of speaking with each of those land owners and acquiring that property, so we could have accessibility to those Cliffs. There was a lot of work that had to be done around that.”

“The Heritage Commission did a great job getting that completed. We’ve been so blessed to have so many volunteers. It has been so embraced by the community. You can drive by and see so many families there at the Cliffs making memories. It is a special place for our community,” Canepari said.

After talking with Steve Canepari recently, I learned that the Cliffs received their name from a previous owner, John Jeffries (it is still not clear as to the original spelling, even after extensive research), a British doctor who married Daniel Boone’s daughter, Elizabeth Boone. Jerry Harris acquired the land in the 1970s.

Steve said that the group of children in the Clarion photo next to the new stairs at the Cliffs in Spring of this year, were with a homeschool group. They were the first bunch to use the stairs. He hopes to see the love of the Cliffs being, “spread through generations.” And bringing children out to hike the Cliffs, he says, is a great way to, “plant those seeds.”

Steve leads guided tours at the Cliffs and shares his extensive historical knowledge. Tours can be scheduled via email: jeffreyscliffs@gmail.com

Jeffreys Cliffs are open to the public: Fridays, Saturdays, Sundays, Monday holidays, and other special days; as well as for Spring and Fall breaks for Perry County & Hancock County schools. The website is jeffreyscliffs.org.