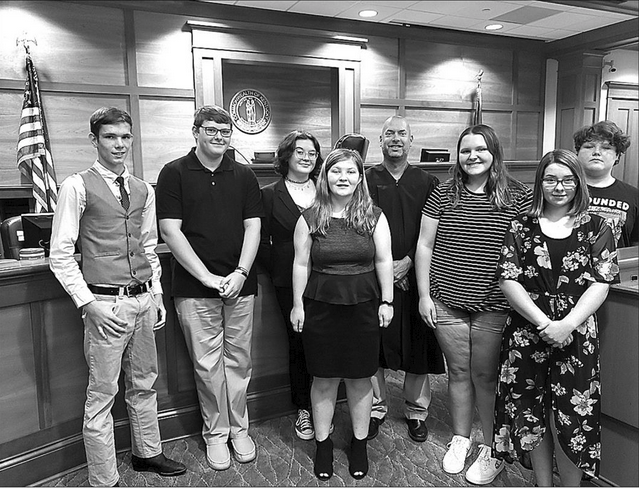 The jury deliberated before the verdict was read by the judge during a mock trial at the Hancock County Judicial Center Friday.

Josh Roberts decided to do something a little differently this year while teaching a summer school class at Hancock County Middle School. He asked his students what they might be interested in studying. The end result was a mock trial that was productive in multiple ways.
“I gave the students an opportunity to choose topics that interest them and we devoted this week to law,” he said.

Roberts decided to have a mock trial and he gave his class a list of historic cases to choose from. 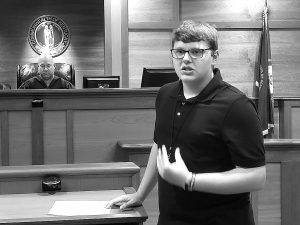 They settled on Terry v. Ohio, a landmark decision of the Supreme Court of the United States in which the Court ruled that it is not unconstitutional for American police to “stop and frisk” a person they reasonably suspect to be armed and involved in a crime. The other case the class chose was Tinker v. Des Moines, another landmark decision by the Supreme Court that defined First Amendment rights of students in U.S. public schools.

The students studied the cases and were given duties to preform the mock trial. Presley King was the prosecutor in the Tinker v. Des Moines case while Samual Huff argued for the defense. Others took a seat on the jury.

Mr. Roberts contacted Hancock County Circuit Court Clerk Mike Boling and inquired about having the mock trial at the judicial center. Mr. Boling agreed to accommodate the class.
“We took a tour of the court house and Mr. Boling was really good to us. The visit allowed us to learn about the different careers associated with law and we learned the political side of the elections,” Roberts said.

The class also received a visit from Mr. Boling’s son, Daniel Boling, Esquire.
Daniel Boling spoke to the students and the class got to ask questions about various aspects such as schools, law colleges, pay, etc.  “Daniel did a great job with the class and he gave them a fresh prospective. He talked to them about what a day in the life of a lawyer was like, and that’s what they really wanted to know about,” Roberts said.

The students researched the constitution and the amendments that backed up their argument. They looked up other cases and historic documents like the Declaration of Independence and the Magna Carta. 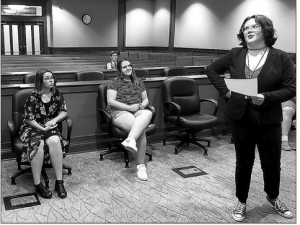 “I picked some cases that were really debatable for both sides. I wanted them to have a rich experience where they could really back up their case and try to poke holes in the other,” Roberts said.

The characters performed their duties during the mock trial and the jurors deliberated on the case. Mr. Roberts served as the judge.

“Part of my job as a teacher is teaching civic responsibilities that they’ll have to perform once they become adults, and we wanted them to have the opportunity to look at the careers but to also see what it’s like to go through the whole experience,” Roberts said. “I thought it went really well and I know they all learned a lot from this. The life skills of getting up in front of people and speaking… you can’t replace that.”

Damion Basham was the prosecutor in the Terry v. Ohio case, while MaKenna Rearden, Sarah Huff, Nora Meserve and Wesley Richmond served as jurors.
Ms. Janet Bailey’s class participated and she was able to have a court reporter on hand to record the event.
“If I can make it fun, and they’re learning, that’s always my goal as teacher,” Roberts said.