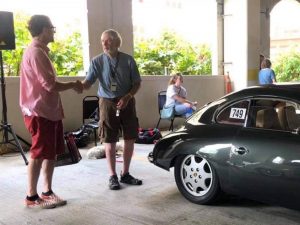 I’m beginning to embrace my new, sickly lifestyle. I’m driving with my bright red handicapped parking pass dangling from my rear view mirror and I’ve found a freeing new excuse for all occasions: “Hey, I’m dying. What do you expect?” Who can argue with that?  No one, that’s who.

Life is funny but dying can be too, but I’ll admit it’s a punch line that doesn’t always fly.

I have to use my lighthearted handling of this stuff wisely, because I bummed out an older guy at the Porsche Parade at French Lick Monday. He had a beautiful 1955 356 Continental in the concours d’elegance and I asked him some questions about it but added that I didn’t want to take up too much of his time.

He said, “When you get old you’ve got nothing but time.” It struck me as funny that he was making a comment about having more time than he knew what to do with while I’ve been doing everything I know to do to try to get more time. I told him that I’d just been diagnosed with cancer so time was a precious commodity to me. I could feel the fun fall out the bottom of that conversation.

Maybe I’ll live much longer than my diagnosis says I should, but it’s still true, as some have said, that life is a fatal condition.

Time is indeed fleeting whether you’re dying or not.  I am dying, but so is everyone else. That includes you.

The average life expectancy for males in the United States is about 78 years, according to the trusty internet, but it doesn’t sound like I’m going to get that. I always assumed I’d get way more. It looks like I was wrong.

I’ve often said and heard that the only thing worse than getting old is not getting the chance to be old, but I’m beginning to think another thing worse than both of those is not using the time we have well.

There were years in my 20s that I wasted doing essentially nothing because I was waiting for something better, but I didn’t learn until much later than most the lesson that little things lead to bigger, better things. I would’ve been better off if I’d swallowed my pride and taken the bad jobs or done the embarrassing tasks.

I sold a car last week to put the money toward bills and I’d owned it seven years without ever having gotten to drive it. I kept saying I wanted to “do it right,” but that meant it never got done. Now that car is gone and soon the money will be too and most of my memories are of walking past it in the garage.

As much as I’m wanting more time there’s no way to make that happen.

Only God knows how many days or years any of us have, but there’s one thing we do know: every one of us, rich or poor, happy or sad, gets 24 hours each day. We can’t speed them up, we can’t slow them down, but we can use them well or we can waste them.

Do one thing with this current 24 hours that makes you happy, or better yet, do something that makes someone else’s day better.

No one ever says on their deathbed that they wish they’d watched more TV or treated people worse. No one says they’re so pleased that they spent years holding onto a grudge.

Go for a short walk. Sit outside and look at the sky. Get up a little earlier and listen to the birds. Put in a little work on that project. Give someone a compliment. You have 24 hours so make them good.

Posted in News and tagged 1955 356 Continental, average life expectancy for males, Dave Taylor, Get up a little earlier and listen to the birds, Give someone a compliment, Go for a short walk, Porsche Parade at French Lick, Put in a little work on that project, Sit outside and look at the sky, Stage four cancer